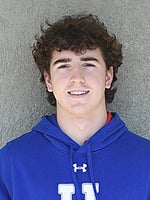 Also plays basketball. 2020: As a sophomore, helped Columbus Heritage Academy to an 8-3 record and a state semifinal berth in the Mississippi Association of...

Wonder if he knows Khamauri?

Looks a lot smaller than what he's listed as.
Great arm strength though, Iamaleava is the QB I want but this kid would be a nice consolation price.

This must be unauthorized communication by Ponce. No way Mario greenlights a 3 star QB. 3 star?????????? Forgot what those are already.

This kid is sneaky athletic, has a quick release, and is pretty accurate (throws his WRs open and the to correct shoulder a lot in those clips). We may be looking at bigger fish, but this kid has some real tools.
R

Imagine this guy with Miami playmakers....love the completion %....not a bunch of easy throws....makes adjustments outside the pocket...not elite arm talent but good enough...is his height and weight verified?...definitely a take if Nico and Dante say no.....
K

I’ve never heard of his school..

I have to trust the coaches on this one. Touch was nice and he showed good QB speed, but not sold on arm strength.
G

Now Howard, who led his team to a MAIS 5A state title as a junior, is a guy that Ponce, along with offensive coordinator Josh Gattis are evaluating and could potentially offer. There’s a Zoom call set up for Howard to meet more of the staff.

“[Ponce] actually texted me last Friday and we caught up a little bit over text and he wanted to call him,” Howard told InsideTheU when reached by phone. “We had a good 15 minute discussion and he told me he landed the quarterbacks coach job at Miami. He told me he loves my film and thinks I can do everything. I’m really looking forward to building this relationship.”

Miami hasn’t offered yet, but it’s possible that one comes once the Miami staff gets a better understanding of who Howard is.

“I think he wants to get to know me a little bit more and build a relationship and then I think we can get to that point, but I know he’s really high on me and I’m really high on Miami,” Howard said.

The nation’s No. 20 signal-caller, per the industry-generated 247Sports Composite, is planning on visiting Miami this spring. Auburn, LSU, and Mississippi State, and Cincinnati are other programs involved, though the Bearcats are the only ones to offer at this point.

Howard’s father played for LSU, but that doesn’t necessarily mean the Tigers are in the best position to land the junior should they offer.

“It would be a special offer, but honestly we’ve always talked about it. It’s my decision and my parents always made it clear to me that they’re going to follow me wherever I go. Wherever feels like home is where it’s going to come down to,” Howard said.

In 13 games, Howard completed 73 percent of his passes for 3475 yards with 47 passing touchdowns to just three interceptions. He also added six more rushing scores on the ground.
A

Good arm, not great but with that quick release, he'll be fine. He's accurate on all three levels. Good size and he moves well in the pocket. One negative is on a lot of those throws he went with his first read. You don't really see him going through his progressions. That may just be because of the plays he chose to highlight but it stood out to me. That said, the kid was throwing dimes. He's accurate and throws a very catchable ball.

Me either. You would think MissSt. would be all over him since he's 30 min away.

Put you out dick in to be puchina

if he stays humble and eats his vitamins, that is his floor.

puertorricane said:
Looks a lot smaller than what he's listed as.
Great arm strength though, Iamaleava is the QB I want but this kid would be a nice consolation price.
Click to expand...

I don't see a lot of zip on his throws, but he's accurate.
K

GCCane13 said:
Me either. You would think MissSt. would be all over him since he's 30 min away.
Click to expand...

The private schools in MS are totally different than Fl private schools. Watch his highlights and tell me what you notice about his team and the other teams competition. I’m not a scout by any means but I’ve literally never heard of his school.