Stefan Adams
Dec 18, 2018
After nearly four weeks off, the Miami Hurricanes held their first practice today for bowl prep ahead of the December 27th matchup against Wisconsin in the Pinstripe Bowl. Head coach Mark Richt spoke at the conclusion of drills and offered his thoughts on how his team came back from the layoff.

“I thought it was a really good practice today,” Richt said. “Starting with our scout team – we probably don’t give those guys enough credit. These guys came out and gave good effort, and when they do that, you have a chance to have great simulation. It was a nice, warm day. They got some good work in during practice and some good conditioning afterwards. I’m proud of how that went.”

“I’ve got all the faith and confidence, obviously, in coach Patke and coach Banda to be co-coordinators,” Richt said. “Jess Simpson has been moved to the associate head coach position – a position that’s going to free him up to help me on a lot of things that I need for ‘big item’ stuff. He has spent his whole career being a head coach and I really like the input he has.”

Although the title of “co-defensive coordinators” may imply both Banda and Patke have equal input, Richt said it will be Banda that will call the defense.

“Banda is going to call the defense,” Richt said. “But the input is going to be what it always is, and that’s everybody’s input matters. When it comes to calling the game, it’s going to be Banda.”

A big reason for promoting within? So the players can keep the same terminologies and techniques Diaz taught that led UM to the #2 overall defense in 2018.

“Knowing Manny took the opportunity at Temple, we had a decision to make,” Richt said. “I didn’t see much broken on defense, so I didn’t want to sit there and try to start from scratch. Our kids know the terminology, our kids know the values and they know the pillars of success. They know how to tackle the way we want to tackle. So much carryover was so important, in my mind – that’s the reason why I did what I did.”

Even though Diaz is now the head coach at Temple, he is finishing out the season with Miami and coaching the defense one last time against Wisconsin next week.

“He wanted to do that,” Richt said. “This was way back, from the first moment I found out he was taking the Temple job. I was 100-percent behind it. There’s no reason I wouldn’t want him to be here. He has done a great job. He wanted to finish the season with these guys, so I afforded him the opportunity.”

With the vacancy left on the staff resulting from Diaz’s departure, many have speculated that open spot would go towards an offensive coordinator, or someone on the attacking side of the ball. However, Richt nipped that in the bud real quick.

“It’ll be a defensive position,” Richt said of the opening. “We’ll hire one more.”

Did Richt regret announcing a national coaching search, only to turn around and promote from within a day later?

“Not really… I thought it was the right thing to do, obviously, or else I wouldn’t have done it,” Richt said. “The timing was really perfect, as it turned out.”

The early signing period begins tomorrow and prospects from the 2019 class can finally start to sign with their school of choice.

“It’s a battle royal out there, for sure,” Richt said of recruiting. “We’re not 100-percent sure of what’s going to come in, to be honest with you. There’s a bunch of them we feel very confident, there’s some we’re just not sure.”

**Brevin Jordan practiced today, while Michael Irvin II was a limited participant. Will Mallory was still held out coming off his injury vs. VT.

View as thread
I’ll answer that last sentence for u Mork............you get no one
Richt’s comments about the quick turnaround in promoting Banda and Patke are inexcusable. And his lack of forsight in understanding the problems on offense are even worse. Next year is his last year. Anything less than double digit wins and he can pack his bag. I’m done with this crap.
So no OC.

RightSaidFred said:
So no OC.

watch the end of the video.

Go Canes
Fck him!
**** this guy
Advertisement
Ed reed safeties coach....
“I didn’t see much broken on defense, so I didn’t want to sit there and try to start from scratch.

Meanwhile on the offensive side of the ball...

“It’ll be a defensive position,” Richt said of the opening. “We’ll hire one more.”

**** man
I absolutely hate that guy.
Pillars.He said ‘pillars’.
Before Mark Richt was hired here, he told the media he was looking to be an OC somewhere. Then the Miami job fell in his lap.

Richt would rather be OC than head coach. He will NEVER give up playcalling. Ever.

One thing that’s gone unnoticed is the promotion of Jess Simpson to Associate Head Coach.

This is a direct response to Jimmy Johnson and the like saying yoy can’t be head coach and coordinate one side of the ball.

Instead of hiring an OC, Richt’s answer to that criticism was to hire someone to do the head coaching responsibilities - Simpson.

Don’t be surprised if all the true head coaching is done by Simpson next year. Richt would rather be a pure OC.

Blake James should have known that when he interviewed Richt back in 2016
I’m really starting to dislike this guy!
i legit hate him as a person ; super hypocritical like every other super religious nut out there.
Advertisement 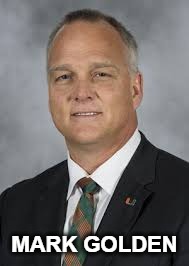 RightSaidFred said:
Richt would rather be OC than head coach. He will NEVER give up playcalling. Ever.
Click to expand...

when Mork was first hired as HC he said "my worst mistake at Georgia was giving up playcalling ... i will NEVER make that mistake again"