The 5-11 155 pounder is currently a 3-star recruit in the national rankings according to Rivals; he has not yet been ranked by 247Sports. His commitment keeps Miami’s 2021 class at the top spot in the class rankings on both 247Sports and Rivals.

George has a breakout season last year for Plantation, putting himself on the map with 610 yards and 9 touchdowns as a sophomore and earning All-Broward honorable mention. He profile increased even more this spring, as he earned his first P5 offers from NC State, Kentucky, Syracuse, Pitt, and Minnesota among others. He later landed his Miami offer after putting on a dominating performance in the UM 7-on-7 tournaments on campus in front of the coaching staff. After returning for Paradise Camp two weeks later, George felt that Miami was the place for him and gave his commitment to the staff.

George shows on tape he can make plays both on the outside and the inside, but probably profiles best as a slot at the next level. He posted a 4.72 40 time at the Opening Miami Regional in February, but seems faster on tape because of his great change of direction and short-area quickness. Could be an elite slot receiver in that he is more than just a “move the sticks” possession receiver.

George shows the ability to take a quick pass and go the distance and he is a threat from all over the field. His routes feature sharp and relentless angles designed to maximize the space between him and his defender. Instinctively finds open areas on the field when his QB breaks the pocket and knows how to exploit gaps in zone coverage. Dangerous in breaking off and converting comeback routes just before the sticks. Would like to see more long speed out of a Miami-level receiver, but no doubt an advanced pass-catcher for his age.

George’s commitment brings the total class numbers to 12 and he is the third wide receiver commit in the 2021 class along with Miami Northwestern (FL) 3-star Romello Brinson and Hialeah (FL) 3-star Fred Eaford.

Despite the already high number of commits, I don’t see Miami shutting down their WR recruiting, as they are well aware that changes can happen over a year from the 2021 signing day. As for the rest of the WR targets, Miami has spent the spring evaluation period sending out a ton of offers at the spot and has now already offered a whopping 20 WR’s in 2021. From the beginning, the Canes’ top target at the position has been Booker T. Washington (FL) 4-star Jacorey Brooks and Miami wants him badly. Some combination of Brinson, Eaford, George and Brooks would be incredible for new WR coach Taylor Stubblefield and that type of quality would arguably match any other WR class in the country. Brooks won’t be an easy case though, as he is slowly becoming more known as a national recruit and also has offers from Alabama, FSU, UF, UGA, Penn State, and Texas A&M. I’ve heard Georgia in particular will be a major player with Brooks.

Athletes such as Gulliver Prep (FL) 3-star Yulkeith Brown and Miami Palmetto’s (FL) Brashard Smith could also end up as receivers and have shown preliminary interest the Canes as well. Both visited for the Manny Diaz Camps as well as Paradise over the weekend.

By the time George hits campus in 2021, UM will have senior receivers Brian Hightower, Evidence Njoku, Dee Wiggins, and Mark Pope, a junior Jeremiah Payton, and sophomores in Xavier Restrepo and Marcus Fleming on the roster.

With the type of talent Miami is bringing in at WR, George will have to be well-prepared both mentally and physically if he wants to crack the rotation as a freshman, as the competition will be fierce for reps at WR. While it’s unclear if Stubblefield will be as rotation-heavy as his predecessor, the philosophy under Manny Diaz seems to indicate that seniority will not matter when it comes to playing time and the best players will play, so George will have a shot to see the field despite an upperclassman-laden group. Miami really is just stacking blue-chips at receiver and it’s hard to say which recruit will rise to the top, but George has the potential to develop into a very good player in the ACC.

View as thread
Man you gotta stop doing these. My life is already going by way too fucking fast. I can’t be reading **** like “Senior receiver Mark Pope”. Dude was in High School like 45 minutes ago.
I always catch a few Plantation games a year and I was usually impressed by this kid. He was the best skill position player for a pretty good Colonels team last year as a sophomore. He's not a big kid at all but plays quicker than a 4.72 40 time. I knew he was a FBS kid but I'm not sure he's a Miami take but I guess the coaches feel he can make the jump to 4 star level receiver by the time he's a senior. Should be interesting to see if he can. 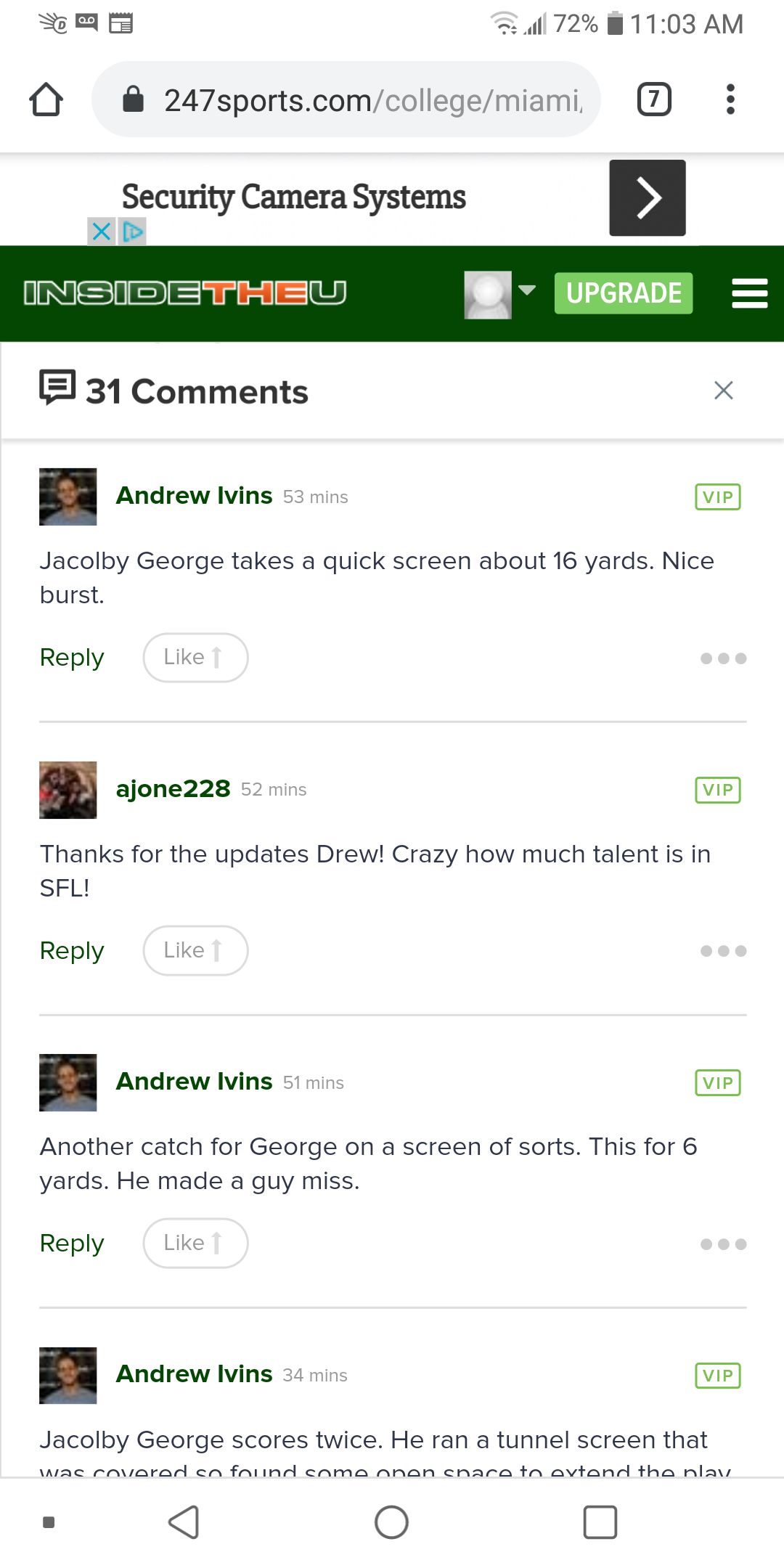 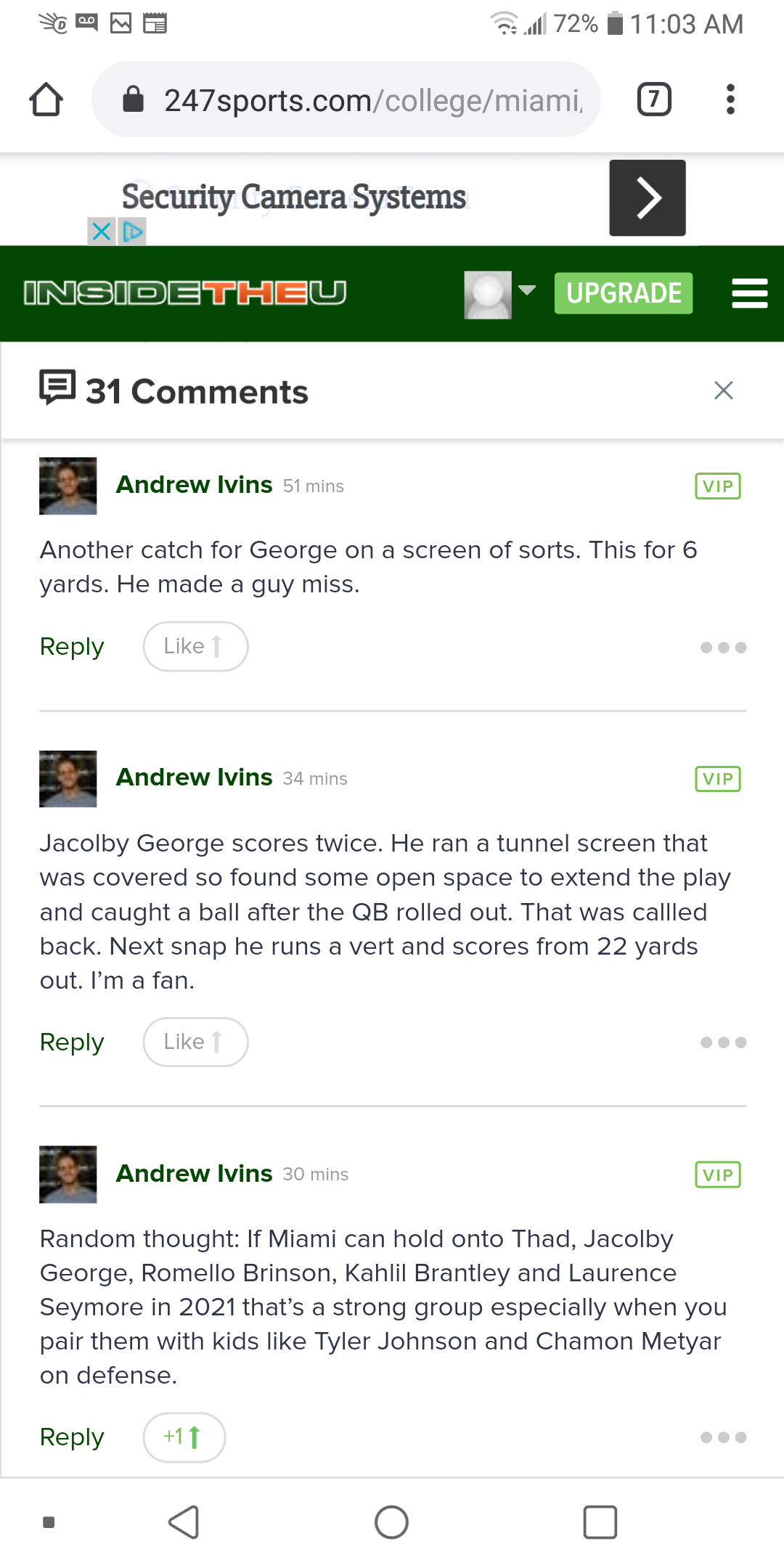 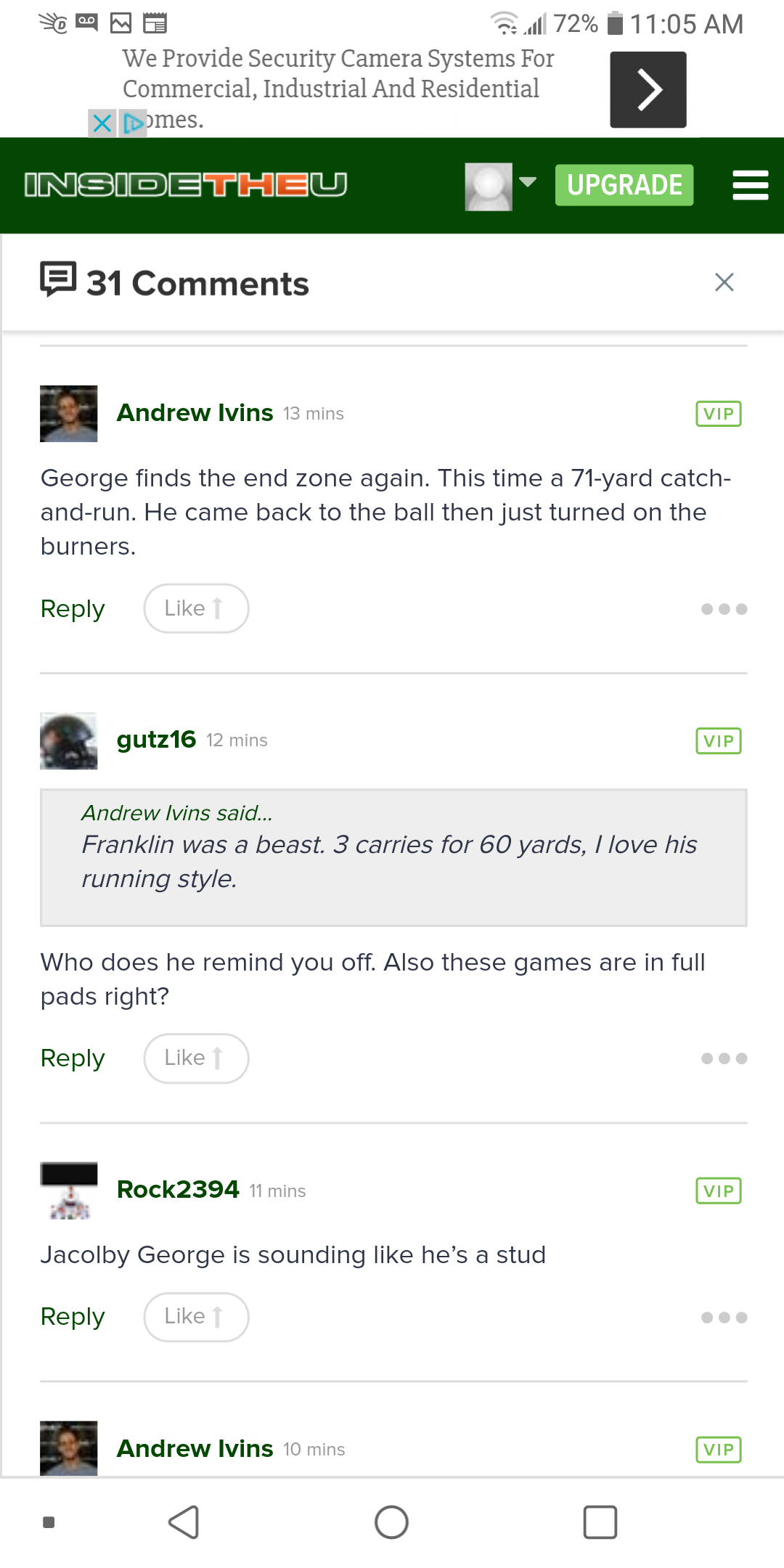 Jacolby is putting on a show against Chaminade.
Scored again. TD catch, 49 yards.

Is Jacolby that good or is Chaminade's DB's that poor?
I never **** on him when he commit.

I'm shitting on him now for his most recent comments basically saying he's waiting for a better offer than Miami. 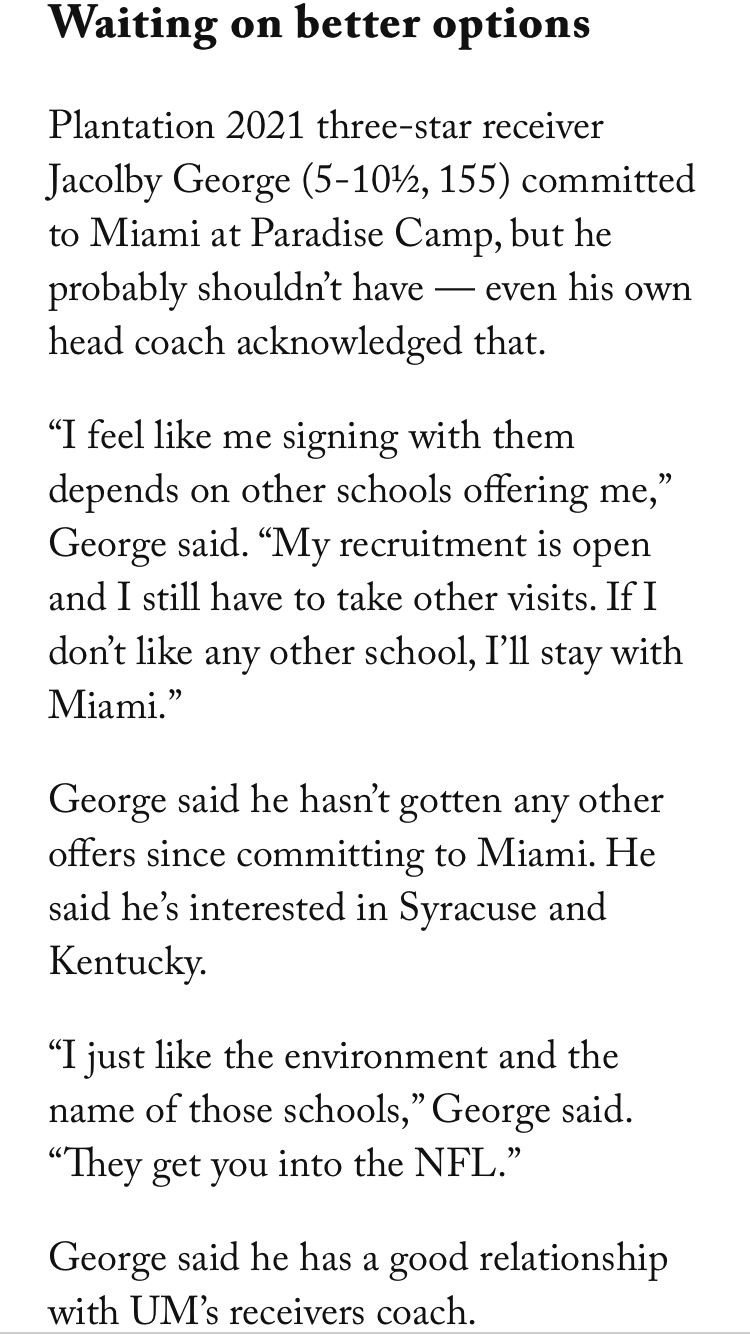 End thread. He as much of a Miami commit as 4* Donell
lol gone

we r a stepping stone school
Seriously hope they very publicly pull his offer. I know that would probably be dumb but **** this kid.
LOL 2021

End thread. He as much of a Miami commit as 4* Donell
Click to expand...

The boy doesn't sign for another 15 to 17 months, even if he said my recruitment is closed or I'm 1000% committed would you really believe it? Also, if Syracuse and Kentucky is what I have to be worried about then I like our chances. If he said Bama or Clemson, I'm a bit more worried.

This. Be curious to hear his tone later on if we start executing the Enos offense and look competent on that side of the ball.
Wow man. Drop this fucking kid. He's wiping his ass with that offer.

Cane4life18 said:
Is Jacolby that good or is Chaminade's DB's that poor?
Click to expand...

There’s always one
Even worse than the fact he feels this way is that he would say it just like that to the public with no problem. Blatant disrespect. Dont like that at all.
Fck this loser. This is why we need to do better vetting the character of these dopey kids two years out. I hate two year early “commits.”

we r a stepping stone school
Click to expand...

To Syracuse? Nah bruh. If that's who he's talking up, we've backed off.

Trav said:
To Syracuse? Nah bruh. If that's who he's talking up, we've backed off.
Click to expand...