Stefan Adams
Apr 2, 2019
2020 Massachusetts 4-star OT Zak Zinter paved the way for his high school team to go all the way in 2018, helping Buckingham, Browne, & Nichols School to multiple championships as a junior.

“I had an awesome junior season,” Zinter said. “We won our conference and won our New England Bowl game as well, so two championships. Looking to do a repeat with my team this year.”

Despite all the recent team success, Zinter has been a highly-pursued national recruit for over a year now with offers from schools like Ohio State, Notre Dame, Michigan, Penn State and a host of others from all around the country. The Miami Hurricanes also recently got in on the action when they offered Zinter in late January.

“I was really excited about the offer,” Zinter said of Miami. “It’s a great opportunity.”

Zinter is actually originally from the Sunshine State, and lived in Florida for 12 years before moving north to Massachusetts. He still makes multiple trips a year to south Florida, and that’s part of the reason why he says distance wouldn’t prohibit him from considering Miami.

“Not at all because I’m actually a Florida boy and lived there in south Florida for 12 years,” Zinter said. “My entire extended family is in Florida. We travel to Florida multiple times a year to go back home, so possibly this summer I could visit the campus.”

So, besides having a bit of a hometown feel, what else attracts him to Miami?

“I know Miami is a great academic school with good football, which are 2 of my top wants in a school,” Zinter said.

In terms of other programs, Zinter feels it’s best to keep an open mind going through the recruiting process, and has not eliminated other programs from his list as of yet.

“I haven’t really narrowed anything down, just trying to figure this all out,” Zinter said. “I would say Penn State, Notre Dame, Michigan, Boston College, Ohio State, Duke, Virginia, and Northwestern are the ones I hear the most from. But I hear from about 15 other schools multiple times a week.”

Over his spring break in late March, Zinter did a college visit tour of some northern schools that included Virginia, Duke, Boston College, Notre Dame, Penn State, Ohio State and Michigan. The 6’6” 310 pound prospect has also already scheduled a return visit to the Irish, which will be his first official visit on June 21.

Getting ready for his final season of high school ball and staying focused on his team is paramount to Zinter, which is why he intends to have a decision made before the season.

“I’m hoping to make a decision by end of summer,” Zinter said. “The top 4 things I’m looking for in a school are: high academics, really good football, a coach who can develop me for the next level, and the right brotherhood.”

View as thread
Want
Seems to put a big emphasis on quality education with the schools he's considering.
mean streak and built the right way. Looks like the typical Notre Dame lineman..definately a WANT
This prospect is near the top of my list.

gcane44 said:
Seems to put a big emphasis on quality education with the schools he's considering.
Click to expand...

BB&N is one of the best academic prep schools in Boston. I grew up skating in their hockey rink at 6am on Saturday mornings

gcane44 said:
Seems to put a big emphasis on quality education with the schools he's considering.
Click to expand...

He attends BB&N, is an independent co-educational day school in Cambridge, mass. Which is were Harvard is, so it goes with question education will be big for him given the town his parents chose to live in.

Definitely at the on of the top spots on my OT want list, irregardless if the prep league has poor competition.

I would love to see how fairs at Paradise Camp against local competition.

Go Canes
Who said white boys can't jump, especially at 6'6" 310lbs. This a even better offer by UM now that I have seen this.

Go Canes
Get this article to CMD, Cooney, and Butch Barry. We need him to at least visit.
Advertisement
Good interview with the young man, sounds like Notre Dame is going to be hard to beat. But let's see what happens. 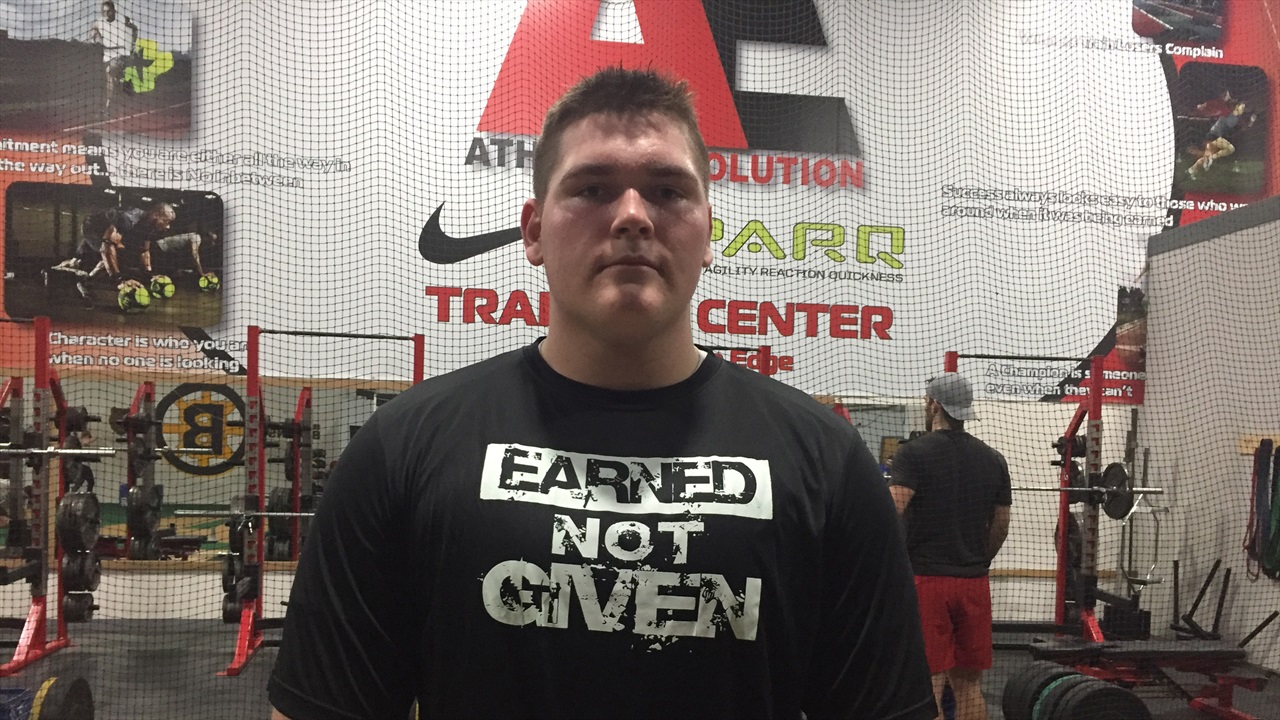 2020 Massachusetts offensive lineman Zak Zinter talks about his recent trips, including one to South Bend, why he locked in an official to Notre Dame and how Athletic Evolution has helped him grow as a player.

Go Canes
Didn't realize the Sofla connection. Interesting.
Kid is obviously serious about academics judging by his list. Never hurts to have some brains and brawn up front.
Being real, this kid will end up at ND
This kid is no joke!!!!!! How many pancakes did he have in that video? Hope he can transition to tackle

TaylorCaneOrDie said:
Get this article to CMD, Cooney, and Butch Barry. We need him to at least visit.
Click to expand...

gcane44 said:
Being real, this kid will end up at ND
Click to expand...

Is he Catholic? Does that make a difference anymore?
Advertisement

Paranos said:
He attends BB&N, is an independent co-educational day school in Cambridge, mass. Which is were Harvard is, so it goes with question education will be big for him given the town his parents chose to live in.

Definitely at the on of the top spots on my OT want list, irregardless if the prep league has poor competition.

I would love to see how fairs at Paradise Camp against local competition.

My alma mater! Yea BB&N is one of the best prep schools in New England and the academics are really rigerous. Definitely toughest four years of my life. Our football team has been great for a long time. Went to our bowl game this year where they shut out Clemson QB signee Taison P. 21-0. Zinter is impressive

Not sure wher he is gonna go but buzz around Michigan
Mean streak, plays with excellent leverage always under his feet. Also for a long armed kid already strong with a 360 bench press and over 500 pounds in the dead lift.
Based on his desire for high level academics and football within equal footing I guess BC, ND, and Michigan are the biggest competition. Would love to land a kid like this.
Great academics and good football. **** lol.
You must log in or register to reply here.
Share:
Facebook Twitter Reddit WhatsApp Email Share Link