DMoney
Jul 12, 2013
Over the past two years, I’ve been lucky enough to see Dade and Broward’s best compete on the gridiron, at camps and at 7-on-7s. The list below is my personal opinion, and I don’t speak for Peter, Tito, Cam or Nash. All forty times are verified by SPARQ. NOTE: I did not include Travonte Valentine as a Dade/Broward prospect because he hasn't played a real game down here yet. If you include him in the mix, he is likely a Top 10 prospect.

5. Jordan Scarlett, RB, University School- (5’11, 200)- Arguably the top back in the nation for 2015. Even though he is built like a young Trent Richardson, his gliding running style reminds me of Darren McFadden. Possesses legitimate breakaway speed to go along with his power. Ran for 1,351 yards and 22 TDs as a sophomore.

4. Ermon Lane, WR, Homestead (6’2, 196 lbs, 4.52)- Elite vertical receiver with downfield speed and the ability to grab the ball at its highest point. Lane is a 48-minute player who gets snaps at WR, CB, H-back and returner for the Broncos. Luther Campbell and the dominant Northwestern defense paid Lane the ultimate respect last year, as you can see below (by the way, he caught a 20-yard fade right after I took this picture): 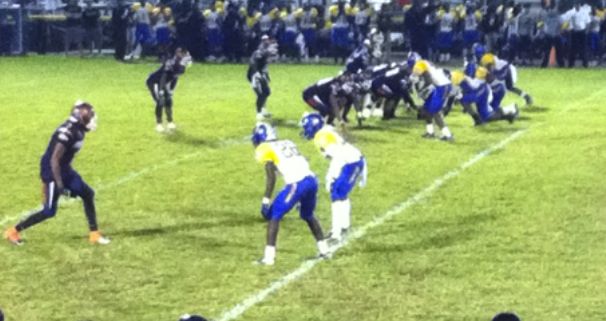 3. Shawn Burgess-Becker, WR/S, Monarch (6'2, 190)- A natural. Played mostly safety in 2012 before exploding as a wide receiver during the off-season circuit. Everything about his game looks easy: his route-running, the way he uses his body to keep defenders away, his ability to snatch the football. Should emerge as a five-star prospect in the class of 2015.

2. Sony Michel, RB, American Heritage (5’11, 210)- Two years removed from a torn ACL, Michel is poised to take back the number one spot. One of the most mentally and physically mature players in the nation. When he goes to high school camps it looks like he’s participating in the NFL Combine. Ran a 10.73 100M after his knee injury, and is close to regaining the pre-injury cutting ability that made him the best prospect in Florida.

1. Dalvin Cook, RB, Central (5’11, 196 lbs., 4.46)- Youth football superstar who has emerged as the biggest playmaker in the state. Played his signature game in the state semifinal at Naples, where he turned 10 offensive touches into 233 yards and 4 TDs. Also plays cornerback full-time for the Rockets.

He was right on the cusp, as was Phillips from Central. Looking forward to seeing Durante this year with Winky.
We won't get any of the top 5.....fire Golden
I feel like burgess Becker is always mentioning us in interviews

Wats the deal with him and Scarlett? Pro cane?
JAquan Johnson at #16?? wow, not sure i echo your assessment!
i agree with cook doe! kid is sick!
D$.

Do you think Cook flips to us at the end of the day or does he end up somewhere else
Advertisement
Think Sony is too high, Ermon is about right. Guess I have to see this shawn kid, must be a beast.

Oh, and this list just shows how LOADED south florida is. Lawd.


Good stuff D$, Appreciate it as I know you get to see these guys in different settings. It doesnt look good now but I just cant believe we will lose Cook, smdh.
Great stuff, D. Tough that it looks like we may only get 7-8 of your Top 25. Man, we have to win big this year to keep these kids home.

Spookcane said:
JAquan Johnson at #16?? wow, not sure i echo your assessment!
Click to expand...

As a football player, JJ is Top 10 . He'll probably be much higher on this list by the end of the season, I just want to see more physical development from him. The two 2015 kids ranked above him are further along from that standpoint.


hasena75 said:
Do you think Cook flips to us at the end of the day or does he end up somewhere else
Click to expand...

I think Cook flips. There is too much working in Miami's favor, and we won't stop recruiting him. Think Howard and Coley. The time Cook spends with his brother on campus will be the difference, IMO.


skyman said:
Think Sony is too high
Click to expand...

I originally had Sony lower based on 2012 performance. But I'm betting on him taking a big step forward two years removed from his injury.
Keep hearing we will stay on Cook, but we aren't going to recruit Sony unless he reaches out....what's the difference?

tsimonitis said:
We won't get any of the top 5.....fire Golden
Click to expand...

BigCaneAl said:
Keep hearing we will stay on Cook, but we aren't going to recruit Sony unless he reaches out....what's the difference?
Click to expand...

one guy is answering his phone the other one isnt
Advertisement

Spookcane said:
JAquan Johnson at #16?? wow, not sure i echo your assessment!
Click to expand...

As a football player, JJ is Top 10 . He'll probably be much higher on this list by the end of the season, I just want to see more physical development from him. The two 2015 kids ranked above him are further along from that standpoint.
Click to expand...

Agree with you, I think some people have a hard time separating how good someone plays in high school from how good a college prospect they are
Definitely concerning we are on the outside looking in with those top 5

BigCaneAl said:
Keep hearing we will stay on Cook, but we aren't going to recruit Sony unless he reaches out....what's the difference?
Click to expand...

There's a great chance still with Cook given his recruitment so far, Joseph and the brother factor. Sony seems pretty set.
We have to make a move on these kids. There is no way that we can get 1 guy out of the top 10 ATM and be title contenders in the next 3 years. (I say 2 because Yearby is top 10 to me.) Just cant happen. I agree that with a good season our fortunes will change. If these kids see young local guys like Bush, Duke, Flowers, Howard, and Burn/Coley tearing it up this season they will want to be apart of it. 9-10 wins should do it. If the unthinkable happens and we pull a Kstate or ND against UF (meaning getting our a$$ kicked up and down the field for 4 qtrs) you can pretty much kiss whoever is on the fence goodbye. Call me chicken little if you want but those are just the facts especially with the way these kids are nowadays. JMO.
You must log in or register to reply here.
Share:
Facebook Twitter Reddit WhatsApp Email Share Link