▪ According to a source, a decision has been made that Tate Martell will take classes at UM but not participate in spring ball, barring an unexpected change of plans.

It’s unclear whether Martell or UM initiated that decision. It’s also uncertain if Martell will look to eventually continue his football career elsewhere.

Perry is completing classes at UM this spring and then intends to transfer, according to a source.

UM has said that it expects King to be back by August, in time for the Sept. 4 opener against Alabama in Atlanta.

▪ UM athletic director Blake James said he’s in communication with Michigan State about rescheduling their game in East Lansing — which was canceled this past September when the Big 10 initially delayed the start of its season and the Atlantic Coast Conference decided to play only one non-conference game.

As part of their home-and-home series, Miami and Michigan State will play at Hard Rock Stadium in September.

Miami’s canceled 2020 home game against Temple is being rescheduled for a future season, with an announcement on that pending. That was part of a two-game home-and-home series which will have UM playing in Philadelphia in 2023.

▪ NFL Network’s Daniel Jeremiah has two Hurricanes going in the top half of the first round of the NFL Draft: Rousseau 14th to the Minnesota Vikings and Jaelan Phillips 16th to the Arizona Cardinals.

“I’m a big fan of Rousseau and his potential at the next level,” Jeremiah wrote on NFL.com. “He has elite length and surprising pass rush polish despite his limited experience at the position. The Vikings’ defense took a big step back last year due to an inability to pressure the quarterback.”

And Jeremiah said “Phillips is the most gifted pass rusher in this year’s draft. He has an excellent get-off, he can bend at the top of his rush and he is a finisher.”

What is the real story with Martell?

Anyone else saying in their head:

Begs the questions..... why don't they transfer now?

kgranger17 said:
Anyone else saying in their head:

Begs the questions..... why don't they transfer now?
Click to expand...

Getting their degrees so they can grad transfer?

rustywalkedaway said:
What is the real story with Martell?
Click to expand...

- not very good at this level
- other interests besides football

kgranger17 said:
Anyone else saying in their head:

Begs the questions..... why don't they transfer now?
Click to expand...

So they can get their degree and graduate bruh 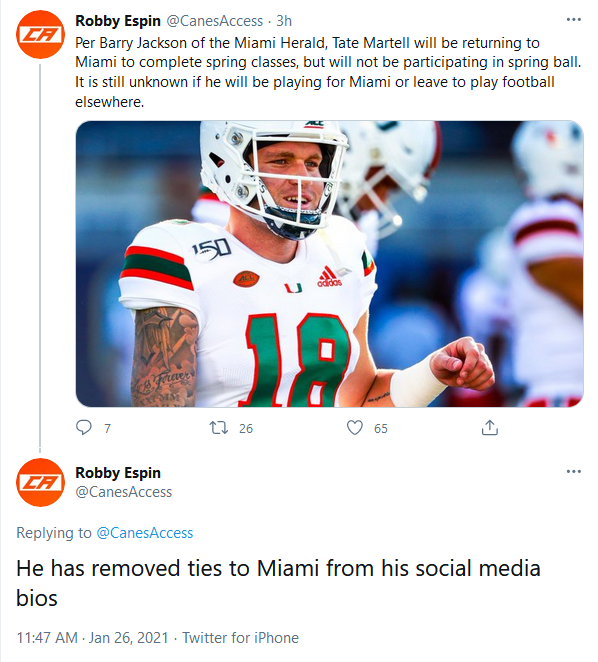 ghost2 said:
Getting their degrees so they can grad transfer?
Click to expand...

Correct. Both will graduate after the spring semester and this will allow them to enroll in graduate courses at a different school this summer.

AUcane said:
I dunno but my guess...

- not very good at this level
- other interests besides football
Click to expand...

Maybe Tate is scouting for some talent on campus to help a new girl become famous and be her personal IG photographer?

Martell should move on and transfer. Really wish Perry would stay because I'm not 100% sold on King being ready by Bama.

Good news on Tate, it's time for him to move on.
S

Ziggy said:
Martell should move on and transfer. Really wish Perry would stay because I'm not 100% sold on King being ready by Bama.
Click to expand...

Martell should graduate then move and transfer. No point in messing up the APR score.

Time to see what TVD can do, glad he is going to get the first team reps in Spring

Makes no sense for Martell to go to class but not practice in the spring if he wants to play. Makes even less sense for Manny to allow it. All in or all out. TNM is still the old cancer riddled culture. The sequel will not be any better.

D_G87 said:
So they can get their degree and graduate bruh
Click to expand...

They bamboozled us because it SEEMED like they were going to play spring ball.
S

Waiting for the CIS posters who will think that mock draft is crazy for having Rousseau and Phillips both in the first round because they havent proven enough on film yet and our scheme makes them look better than they actually are. lol smh.