King is "here to win", speaks on Lashlee's offense

After running Houston’s spread offense in 2018 and parts of 2019, grad transfer QB D’Eriq King comes to Miami with high expectations of putting up big numbers in Rhett Lashlee’s new offense. After all, King had already put himself squarely into the Heisman conversation heading into the 2019 season following a junior year where he accounted for 50 total TD’s for the Cougars.

On Wednesday, King talked about the path that led him to Miami, which included sitting out most of the 2019 season to preserve his final year of eligibility.

“Miami, it’s a great place, they have a great history behind the program,” King said. “A lot of guys here with talent. And me and coach Lashlee, seeing what kind of offense he ran, I felt I’m a good fit for his offense. I came on my visit, me and the guys on the team felt it was the right connection. I felt comfortable.”

What about Lashlee and Miami ultimately drew him towards becoming a Hurricane?

“Everything,” King said. “It was finding the right fit for me as far as football. Coming on campus, getting to watch tape on the receivers, the O-Line. I’d met coach Lashlee before and getting to know him better and watching the tape of what he wants to do - the up-tempo offense, I have experience in it. I felt it was the best fit ultimately.”

It’s been no secret that UM has struggled with leadership in the QB room, something King hopes to change right away.

“Playing college football the last four years, I’m very experienced,” King said. “I want to win. I feel everything you can do right now as far as having fun… football should be fun, but you have to focus on the task at hand right now.

A record-setting high school QB from Manvel HS in Texas, King elected to begin his college career at WR to get on the field at Houston with senior and future NFL’er Greg Ward in front of him on the QB depth chart. His natural athleticism led him to catch 59 passes for 504 yards and 3 TD’s in a year and a half playing receiver, before he switched back to QB in the middle of his sophomore year when another future NFL player, Kyle Allen, got benched.

“I played receiver my freshman year of college, half my sophomore year - that was my first-time playing receiver,” King said. “Playing QB, I feel the QB has to work extremely hard to be productive. Quarterback is now second nature to me. I have a lot to work on, am trying to put the work in, get better.”

With the Canes moving to the spread offense for the first time, King feels the scheme will eventually give the UM players an advantage in terms of relaxing and letting their abilities take over.

"Having experience in playing in a high-tempo offense, I know it allows guys to go out there and play,” King said. “You still have to make the right reads, decisions with the ball... Taking a lot of shots, running the ball - I feel like playing in this offense can help me be successful here."

At the end of the day, King has just one goal.

"For me, I'm here to win,” King said. “I'm going to do everything I can, everything to help my teammates."

You mean, "I'm just here to smoke weed and hang out" didn't excite you?

He needs to help these QB’s learn how to work.
R

1. Win enough to make Miami respectable again.
2. Show TVD how to be a leader.

ThomasM said:
You mean, "I'm just here to smoke weed and hang out" didn't excite you?
Click to expand...

"I'm just here to smoke weed and hang out."

I love what he said. Hopefully it translates to the entire roster. Impressive as fvck that he had never played receiver yet has 59 catches to his name as a freshman and part of his sophomore year. No denying his athletic ability.

We need to be back to being QBU. Him killing it and having success here can take us there.

Diaz is more of a hype man and a backup dancer than a leader, so having a true leader at QB is more critical than ever

He ain’t gonna say I am scared and doubt I can do it. I will wait on results. Nice article though.

That would be funny. Recruit X stated today that he was surprised to get a scholarship and doubts he will contribute. Very honest and introspective young man.

Every kid wants to win. The question is whether he is going to put the hours in to win.

5Rings&an Asterisk said:
Every kid wants to win. The question is whether he is going to put the hours in to win.
Click to expand...

King is going to win here, time for yall to toughen up & get on board got damnit.

What happened last year with him? I haven't really looked, but that 18 year was great for sure.
L

What do ya'll think? 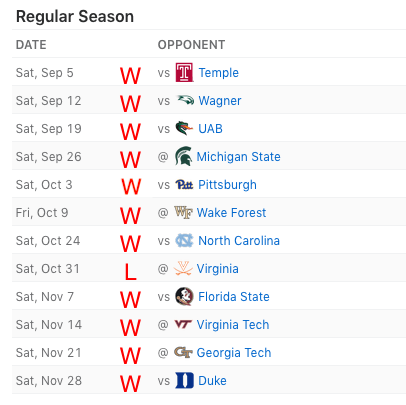 Would absolutely love to go 12-0 or 11-1 but I’m thinking 10-2 cuz we’ll we’re Miami and we lose a couple games to lesser opponents. If we start off 7-0, we’re easily a Top 10 program and the talk of college football again as we were in 2017.
Show hidden low quality content
You must log in or register to reply here.
Share:
Facebook Twitter Reddit Pinterest Tumblr WhatsApp Email Link
Top