Gregory Rousseau has Miami in his top 2 and plans on making his decision at the end of May. He is a very intriguing prospect, he plays WR and S for Champagnat Catholic in Hialeah but projects as a DE at the college level. He is 6-6, 205 and has great athletic ability. Coach Kool could make this kid special in this system.

I'm not expert enough to try to project to how he'll perform as a top Power 5 DE from those highlights. Is Kool high on him? If so, that's good enough for me.

grover said:
I'm not expert enough to try to project to how he'll perform as a top Power 5 DE from those highlights. Is Kool high on him? If so, that's good enough for me.
Click to expand...

Kool has complete control over what defensive lineman get offers and Kool offered this kid.

This is the type of kid I love to take, especially now that our edge depth chart is replenished. Is it us vs. LSU?

Also, if DE doesn't work out, he could get a look at tight end too.

The staff has been on him a while. I see two scenarios.

*They accept his early commitment because DE isn't a big need and this kid will have time to develop.

*They wait around to see if any highly rated national prospects come out of woodwork seeing as how are class is shaping up to be a game changer.

My only holdup on him is he's at champagnat HS and that school is dirty as hell. So many kids with qualifying issues come out of there. Kid has a very high ceiling he's just not fully grown into his position.

I feel almost stunned that we all just casually moved past the first positional projection for this kid which is clearly TE.....

All jokes aside, if he plays some WR now then TE seems like a natural progression, right?
K

Ashevegas Cane said:
I feel almost stunned that we all just casually moved past the first positional projection for this kid which is clearly TE.....

All jokes aside, if he plays some WR now then TE seems like a natural progression, right?
Click to expand...

Probably bc we are recruiting him as a DE
Advertisement

when you say "projects as a DE", who is doing that projection?

kid was running routes at WR in the recent rivals camps

To the poster above me [MENTION=6123]DerekDohrman[/MENTION]

Miami offers unique 2018 ATH Rousseau
2018 Champagnat Catholic ATH Gregory Rousseau is not your typical prospect. Yesterday at Miami's rising juniors camp, the coaching staff found out just that and extended an offer to the 6-6, 205- pound athlete.

Rousseau plays all over the field in high school, including as a wide receiver, but Miami sees his future on the defensive side of the ball.

"At the first session of camp, I worked out at defensive end and outside linebacker, and in the second session I was with the safeties and doing really well," said Rousseau.

"Coach Mark Richt came up to tell me. They want me at pretty much any position on defense," Rousseau said. "I was kinda surprised because I know how hard it is to get offered. It means a lot because they really aren't just offering anybody -- they really look into it."

One coach in particular also stood out to him.

"They're really great coaches over there. I like Coach Banda a lot. He's a good guy and the things he tells me promises me that they're honest."

Rousseau added that he is "definitely" open to playing defense. He says he sees himself playing some sort of hybrid role in college.

Much like cornerback D.J. Ivey yesterday, Rousseau said the thought of pledging to the Hurricanes crossed his mind.

"I thought about committing because of my emotions from the offer. My family likes it a lot and they love how it's close and can come see me play," he said.

Rousseau said that USC, Iowa State, and Indiana are a few of his other top choices at the moment.

I'm hesitant to take any kid who goes to Champagnat since its essentially a fake school. I can't think of one kid who went there and proceeded to have a successful college career.

yea, the camp clips i saw were actually from last summer. so if he's still filling out, i guess DE could happen.
C

Among the many things we have been missing at this program for some time now is a freaky pass rusher.

Every now and then you take a kid like this with the ceiling to turn into Ziggy Ansah, Aldon Smith, Jevon Kearse, etc...it probably doesn't happen, but if it does it is a true game changer.

And if he is athletic enough to play safety in high school, he could become the type of guy that truly wrecks game plans, because not only is he a pass rusher but you can drop him in coverage during a zone blitz or have him cover a tight end and not put yourself in a major mismatch.

Saw his highlights this morning and had no idea he was a WR and S as a 6'6" junior.

Dude is an impressive athlete. I think DE is his position moreso than LB.
Advertisement

umhurricane2511 said:
Richt seemed to always have a tall/thin athletic freak on his Georgia defenses just kinda roaming around
Click to expand...

6'6" 210 WR... Why not recruit him at TE? He will have to bulk up anyway if they want him to play DE, but assuming he has good hands since he already plays WR. 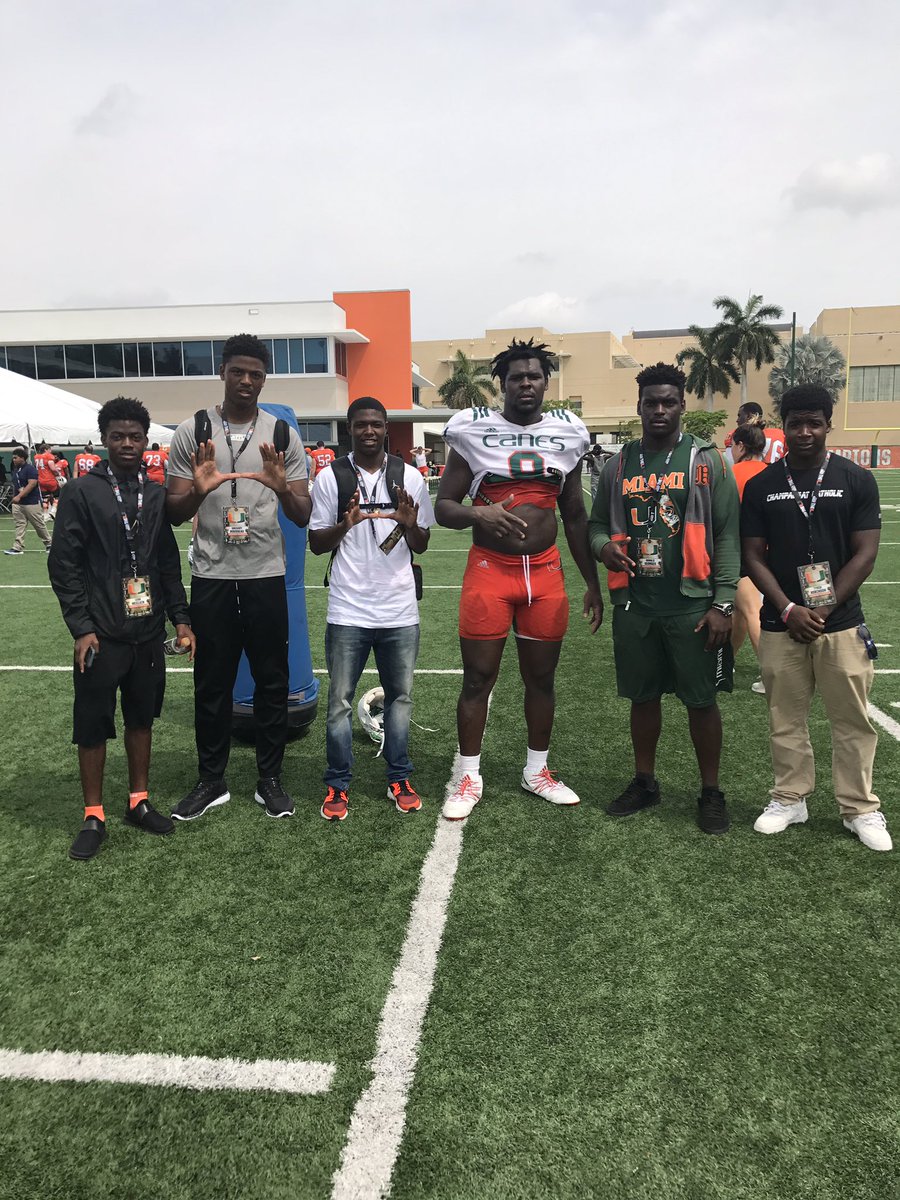 Hopefully champagnat hasn't bent him over so he doesn't end up like this kid.