The 6-3, 275-pounder is currently unranked in the VERY early 2020 national rankings. 247Sports has only ranked 134 players in the sophomore class, while Rivals has no rankings available for the cycle whatsoever at the moment. Moise’s commitment adds to Miami’s #1 2020 class on 247Sports.

He brings size and a very versatile skill set to Coral Gables, and will infuse more talent into a defensive line that is lacking in pure numbers right now.

Moise already has good size at 6-3, 275 pounds as a rising junior in high school and is still growing. He’ll likely be an easy 300 pounds by the time he hits campus in 2 years, and is a surefire interior player for brand-new DL coach Jess Simpson to work with. Originally from South Florida, Moise moved to the Peach State and spent his freshman year of HS in Valdosta, GA, before returning to the Miami-area for his sophomore year at Chaminade, where he played on both sides of the ball. While Moise was an All-Broward second team offensive lineman in 2017, the Canes see his greatest potential on the defensive side of the ball and are recruiting him as a DT.

Moise is explosive with his first step and is powerful at the point of attack, being able to push even the best offensive linemen off balance. He was out at the Opening Miami Regional and nearly made my list of top performers as an underclassmen. Moise’s build stood out at the event and he showed the ability to dominate at times because of how he gets off the ball, sheds blockers, and motors up-field to make the play. Moise's also picked up early offers from LSU, Tennessee, and Oklahoma, showing he is likely to become a national-level recruit within the next 2 years.

Moise is the 7th commit overall and 3rd defensive lineman in Miami’s 2020 class, joining 4-star DE Samuel Anaele and 4-star DE/DT Tre'von Riggins in the trenches. More notably, this is Simpson’s first pledge after not even one full day on the job. While it appears this commitment from Moise was a long time coming and likely to happen regardless, it’ll be a nice momentum boost for Simpson to help him hit the ground running at his new position with the Canes.

The Canes just signed 2 DT’s in a 2018 class where they could have easily taken 4, so DT has become a huge need for both the 2019 and 2020 classes. Being so early, it’s kind of hard to project out positional numbers for the 2020 class when the 2019 class is still so far away from being completed. So, while a lot depends on how many DT’s Miami takes this year, due to the lack of depth on the current roster, I’m pretty confident in saying UM is going to make the position a priority regardless and sort out the numbers later.

Defensive line recruiting has been the single biggest flaw from this staff as a whole the past few years. RJ McIntosh and Kendrick Norton leaving early for the NFL and DJ Johnson transferring back to the west coast put the staff in a bad position to be sure, but the shear misses at these spots were starting to mount. Those holes will be seen on the current roster for the 2018 season and covering it up won’t be easy. Defensive coordinator Manny Diaz loves to rotate on the line, so having plenty of capable bodies at DT is a must for his defense to function.

Within the next two seasons, Miami loses Gerald Willis, Tito Odenigbo, and Patrick Bethel from the position to graduation, and Tyreic Martin could be an attrition candidate if he doesn’t start to show up soon. That leaves only 3 DT’s on the current roster that would be on the 2020 roster, and playing time will absolutely be up for grabs. The Canes are banking heavy that Jon Ford, Nesta Silvera, and Jordan Miller will all develop properly and become a solid trio as upperclassmen in 2020. Behind them, Moise will compete with 2019 commits Renato Brown and Denzel Daxon, along with 2020 classmate Riggins, for a spot in the DT rotation as a true freshman, with the hopes he can develop into a starting level player by his sophomore season in 2021.

This 2020 class is shaping up to be a monster class.

We need another 2 DT for 2019 with Ranato Brown and Denzel Daxon committed. I recall a DT from Wekeiva and the other kid form Largo
we offered.

Gator Hatar said:
We need another 2 DT for 2019 with Ranato Brown and Denzel Daxon committed. I recall a DT from Wekeiva and the other kid form Largo
we offered.

Kid from Wekiva is Tyler Davis, won 247 alpha dog at the opening in Miami.

Lack of DTs will keep Miami from winning a championship.

Canething said:
This 2020 class is shaping up to be a monster class.
Click to expand...

Nah.....it's not a monster class, it's just another Richt class.

This is just what recruiting will be on his watch.

Cot Dam, what a beast for a Soph. Welcome Willie, you a road grader and we like it.

Not This Sheeit Again

Coach Simpson already paying dividends even before his contract is signed. 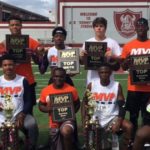 Put on 25 lbs in one year, will be around 300lbs by the time he gets to college.

lol @ Simpson outrecruiting Kul before the ink is dry. =P

THIS kid is going to be the real deal, after watching his tape he's definitely a recruit I want here at Miami!!
R

watched about 90 seconds of his tape. that was enough.

this kid could end up being one big bad mofo, when all is said and done.

welcome to the U!

OL all the way based on the clips I just saw. Looks like he has similar traits as Isaiah Wynn from UGA who's gonna be a 1st round pick in a few months.

Looking at those DT numbers, I can't believe how badly Kool mismanaged, and was allowed to mismanage by Richt/Diaz, the DT position.

Four DTs in three years when we should be bringing in 2-3 a year.