Huge game tonight for Canes Hoops. We beat Duke 76-74 at Cameron Indoor in our only matchup this season. A victory against Duke will be a Quad 1 victory, and could move us up a lot higher in the seeding for the NCAA tournament. #10 seed is where we fall right now according to most projections, but a win against Duke and a win in the Finals would be 2 huge Quad 1 wins that could move us up drastically.

Duke barely beat Syracuse, who was without their First-Team All-ACC G Buddy Boeheim. We can win tonight if we bring our A game, and avoid getting ourselves into a hole. This team has made some incredible comebacks this season from large deficits, but I hope we don't get into that type of situation tonight against Duke.

Duke is -9 and the O/U is 148. The game will be played on a neutral site at the Barclay's Center in Brooklyn, New York, where the entire ACC tournament will be held this year. I added this screenshot from teamrankings.com to give everyone an idea about Miami's bracketology projections. 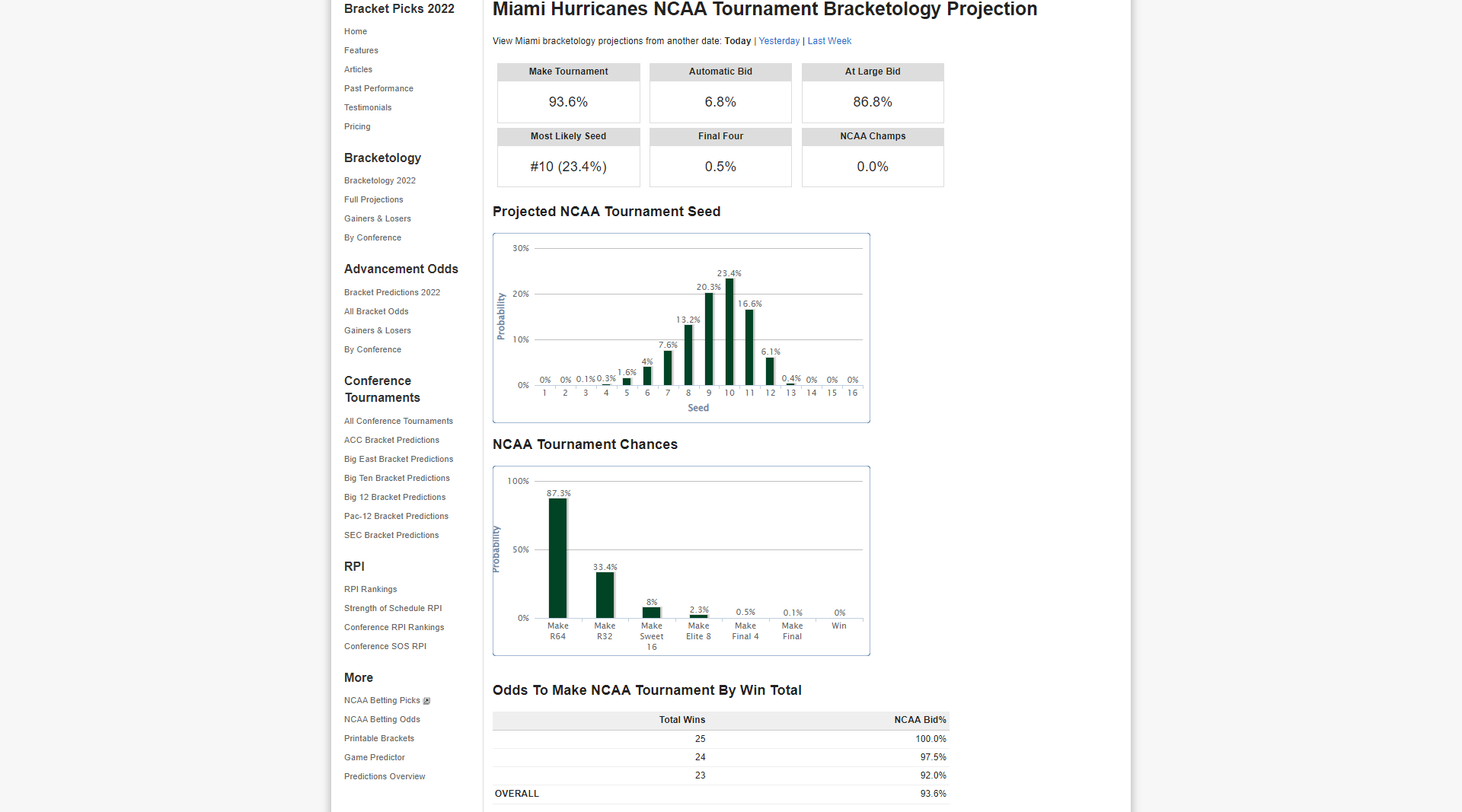 Heart of The Playmaker

2 hours ago I saw Lunardi on ESPN live....Canes are in according to him
He specifically said that there are only 2 slots open that are occupied by Wake Forest and Xavier... with 5 bubble teams trying to get those 2 spots.

It was 3 slots but Indiana winning today put them in.

We better be in. My God what do we have to do. Should NOT even be a question.
S

We’re in. Sit back, relax, and hopefully enjoy tonight. Got the 2 tv setup going tonight with the baseball game also at 7. Go Canes!

canester95 said:
We better be in. My God what do we have to do. Should NOT even be a question.
Click to expand...

Sad that anybody could question it…regardless, I don’t want them to go into the tourney off of that performance yesterday. Hope we play like our tournament lives depend on it today.
S

Fightinibis said:
Sad that anybody could question it…regardless, I don’t want them to go into the tourney off of that performance yesterday. Hope we play like our tournament lives depend on it today.
Click to expand...

A lot about this team has defied logic. Losing home games we should win. Winning road games we should probably lose. Two 18 point comebacks against Cuse. BC set up great for us to win by double digits, we squeak it out in OT. So with most every expert picking Duke to win comfortably tonight I’m gonna say the Canes bring a great effort and it’s one possession game late.

The 3 ball is falling thus far!

Couldnt ask for a better start

im just sitting here with my arms folded like Jim... and yes its definitely working, i aint moving. hope i dont cramp up.
N

Gotta clean up the rebounding, but that's expected with the lack of size. Just gotta out score them and get em out of rhythm
C

Walker, 2! (Coach L giving him and Joseph both early turns, i like it!)

Banchero is a really tough matchup given his size and athleticism