Cory Grimes
Jul 26, 2018
Miami’s last TD of the year was a 38 yard grab by Lawrence Cager, and we are now 38 days away from kickoff in Dallas. With a mix of explosive young talent and experienced familiar faces, combined with deep threat speed and size to create mismatches, Cager, Richards and the rest of the WR room look to be the deepest unit on the team. Here are some of my preseason superlatives for this loaded bunch.

No brainer here. Richards is the hands down WR1 and one of the top wide outs in the nation. He is an elite athlete who can run every route in the book. Richards immediately became a focus of the offense with a record setting freshman campaign, but then followed it up with a less than stellar sophomore campaign which was hampered by injuries. The Hurricanes offense took a noticeable hit with Richards sidelined. Richards has all the ability in the world, but as they say, “the best ability is availability.” The offense is at its best with Ahmmon at 100%. He demands a lot of attention from the defense, and when he’s making plays, he will open up huge opportunities for the rest of this talented group. At ACC media day, Richards said of himself that he looks to be more of an overall leader for the team this year. A healthy Ahmmon Richards in 2018 is crucial for this team. Likely his last season in a Hurricanes uniform, Richards looks to cement his legacy as one of the great Canes WR’s as well as his place as one of the top prospects in next year’s draft.

Sophomore Jeff Thomas is a big play waiting to happen. We got a sneak peek of what he could do as a real deal deep threat last year, but he looks to expand his role in 2018. He will help fill the void left by Braxton Berrios at slot, but I imagine Richt will get creative with JT and find every possible way to get this man the ball in all different places on the field. With a year of experience under his belt, I expect Thomas to play more under control and set himself up for a big time sophomore season. He can break the game wide open in a heartbeat. Jeff will be putting defensive coordinators on notice early and often.

Most to Prove- Lawrence Cager

The first several years for Cager have been a bit of a roller coaster. He is a smooth athlete blessed with an incredible 6’5 220 pound frame, but injuries and inconsistent performances have held him back in the early parts of his career. Last year, he had plays where he appeared unstoppable and others where he disappeared. He can be a serious problem for smaller corners, especially in the red zone. It would be very remiss of me not to mention blocking somewhere in this piece. Shoutout to Coach Dugans. Cager is one of our better blocking wideouts and can be extremely imposing on the outside when he wants to be. He’s shown just how good he can be, so that’s what is expected from him on an every down basis. As a redshirt junior, he appears to be completely healthy and emerged as one of the true leaders in the locker room. It is time for Cager to put it all together in 2018.

Most Intriguing- All of the Freshmen

Pope, Hightower, Wiggins and Ezzard are as talented a group of freshman wide receivers that you’ll see anywhere. I can’t wait to see how they work their way into the offense this year. I already talked about Mark Pope during Freshman Friday. I could go on and on. He will certainly be heard from this year. Brian Hightower nabbed 2 TD’s in the spring game and appears ready to make his mark right now. Wiggins also early enrolled and helped establish himself on this team in the spring. He showed he belongs skill wise but got pushed around at times. He could definitely benefit from some more time in the weight program. I’d put him on redshirt watch for this year but looks to have a bright future in green and orange. In my opinion, the most slept on out of this young bunch is Marquez Ezzard. The four star prospect from Georgia made tough catch after tough catch in high school. He’s 6’2”, a solid 215 and plays very physical for a wide receiver. He has the potential to be one of the best out of this entire group when it’s all said and done. This group is so deep that it’s possible Ezzard could also be a redshirt, but I also wouldn’t be surprised to see him work his way consistently into the rotation. I am interested to see what kind of impact Ezzard makes in 2018. Mark Pope and Brian Hightower are the most likely breakout stars in this group for 2018, but as a whole, this group of freshman looks to be in the makings of something special. 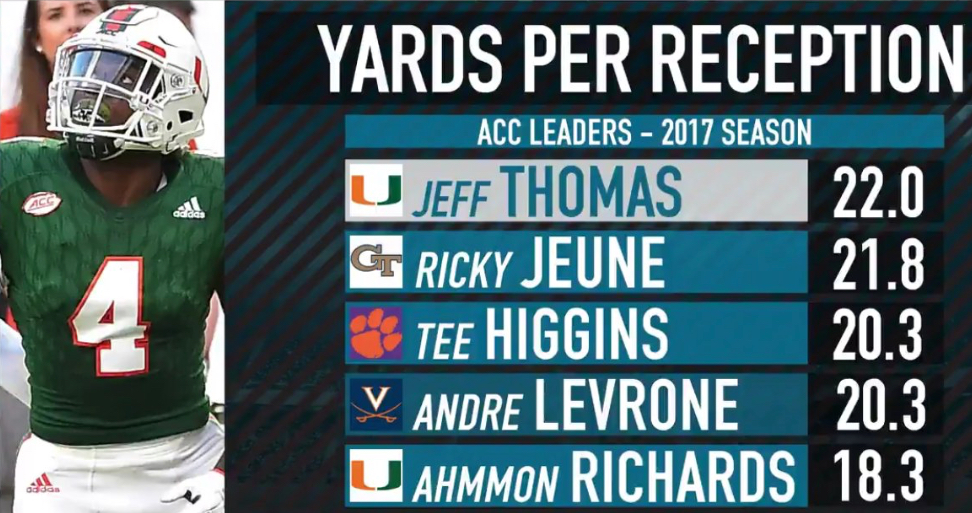 Whole Canes family seems to be sleeping on him.
Remember when Richt first got here, during spring and fall practices, the DB's were just sitting on routes because they were not afraid of any WR blowing past them? Those days are no longer! There's speed across the board. Iron will once again sharpen iron at Greentree.

Whole Canes family seems to be sleeping on him.
Click to expand...

No slight on Njoku. Excited to see what he does. But I was really just referring to this incoming group of freshman.
Dnt forget Mike Harley too
Just a quick note about saying Ahmmon Richards' Sophomore season was dissapointing (while I understand and slightly agree), statistically speaking, he actually had a better season his SO yr than his FR yr.

The most used analytical stat to predict NFL success of college WRs is Breakout Age which is basically how old they were when they broke a 20% Dominator Rating for the season, which is essentially the average of the players Yard share and TD share.

He didn't statistically 'Break Out' as a freshman. He did as a sophomore though. So his sophomore year, in the games he played, he actually got a greater percentage of the teams yards and touchdowns than in his freshman year.

Obviously Richards had the drop issues and the inuries really ****ed him, but he was still very good. But yeah slightly dissapointed because he should be great, and I expect him to this year.
The first several years for Cager. Lol sometimes it feels like a few of these guys been on the team forever 😂
Advertisement
With this talent, depth and variety of skill sets I really think Miami should run their fair share of spread sets and really play a fast, vertical game. (But again, QB play may not dictate that) but with this crew of WR this isn't the time to run Coker-T
We may have the best WR & RB rooms in the nation. Top 5 easy.
And don't forget the dude that helped cement two Cane classic game winners in Langham. He will go down in Canes history for those.

JgDaCane said:
We may have the best WR & RB rooms in the nation. Top 5 easy.
Click to expand...

When did this become a thing?

canesfanmpls said:
And don't forget the dude that helped cement two Cane classic game winners in Langham. He will go down in Canes history for those.
Click to expand...

He should never pay for a beer in Miami again.

He doesn’t have to do anything this year, and he’s still a legend.
Richards and Thomas will be downright nasty this year. And he may get squeezed out, but I really hope Langham gets a decent amount of playing time this year.
when thomas blew the top off of clemsons defense I knew right then and there he was a gamebreaker

bshaw28 said:
Richards and Thomas will be downright nasty this year. And he may get squeezed out, but I really hope Langham gets a decent amount of playing time this year.
Click to expand...

Langham is in my pantheon of great Canes. But he should just make the move to TE now, or GT like Harris did if he wants to see the field. Because there's no way Cager/Hightower/Ezzard don't eat up his reps. Not a knock on him. But our WR group is playoff level, Top 3 in country talented, and very deep.

ScubaCane said:
When did this become a thing?
Click to expand...