"Malik is going to start": Richt breaks down switch back to Rosier at QB

"Malik is going to start": Richt breaks down switch back to Rosier at QB

Stefan Adams
Oct 17, 2018
If you weren’t already expecting it, coach Mark Richt confirmed it today: Malik Rosier is back as the Miami Hurricanes’ starting QB and will take the opening snap against BC in two weeks.

“Malik is going to start,” Richt said. “We plan on getting N’Kosi (Perry) in the game. Malik will be the starter.”

Perry won his first two games as the starter after replacing Rosier, but struggled against Virginia last week and threw two terrible interceptions before Richt switched back to Rosier early in the second quarter. Is this move back to Rosier permanent?

“I don’t know the best way to answer the question, but certainly for Boston College,” Richt said.

As for why he decided to switch back to Rosier, Richt said it’s all about winning games for this season.

“Well, I think he deserves to play,” Richt said. “Again, my goal always is to try to get the guy I think gives us the best shot. At this point I think it is Malik, so... That's what we decided.”

However, Perry will not be sitting the bench the entire game, as Richt said he plans to work him in during the BC game.

“We plan on getting Kosi in the game, though,” Richt said. “If Kosi comes in the game, it's not like we're yanking anybody out. We want to plan to have Kosi get in the game because he's developing, he's getting better. All that experience is going to pay dividends throughout his career, maybe even before the season is over.

“Right this minute, I think Malik is just better equipped from his abilities and his experience to lead this team right now. But Kosi is certainly a guy that obviously we think very highly of. We want him to continue to grow as a quarterback and as a person. That's why we want to make sure we get him in the game."

How have the two QB’s looked in practice this week after hearing the news?

"I've seen great, not good, but great attitudes," Richt said. "They understand. I had a talk with them. I said, `Look, man, none of this is personal’. No decision I've ever made at this position is personal. It's always trying to do what's best for the team. I mean, we do love these guys. We care about them very much as people. We understand their feelings when things don't go the way they want, all that stuff.”

Richt said of Rosier that his demeanor after being benched made it easier to go back to him when the time came.

“If [Rosier] didn't handle his business the way he did under the times when he did get moved to second team, it would have been a lot harder to transition as smoothly as he transitioned,” Richt said. “Malik was cheering for N'Kosi. It was not easy, but he was trying to help the team win through how he would signal, how he would help N'Kosi during the practice and in the game. I got to give Malik a lot of credit as to how he handled everything."

Much was made about the UVA debacle being Perry’s first start on the road, however, Richt believes it wasn’t much of a factor for why he played poorly.

"I'm not going to say that was why he struggled," Richt said. "If we had the same game against Virginia at home, they did exactly what they did, I don't think it was attributed to that. There might have been some of that added to the struggle. I would say no. The one thing you have to change the most when it's loud, that's your cadence, use a non-verbal cadence, all that kind of thing. But we do that every day, every week. Even when we're home, we do it that way. The things that usually are different at an away game we do at home already. I don't see it as that big of a deal."

With the team in the middle of their bye week, Richt has held closed practices the past few days and will be giving players some time off.

“We have this open date, our players actually lucked out - our fall break ended up the exact same time as our open date so they’ll have a couple of days to get away, want to give them a little bit of a break,” Richt said. “Had a couple of practices the last few days and thought they went well. We were certainly taking our time scheme-wise, doing a little more fundamental work, making sure we’re blocking and tackling like we should. It was a good couple of days.”

Although the starting lineup changed on the offensive line against UVA with Navaughn Donaldson moving to guard and Delone Scaife coming off the bench to start at RT, the line had a lot of the same issues getting a push in the run game and protecting the QB. Miami is still rotating heavily on the O-Line, but Richt doesn’t see that as a problem.

“We don't think changing the combination really has been problematic because these guys are getting a lot of reps during practice in the spots that they play,” Richt said. “Now, if you have the same five every no matter what, could that be beneficial? To a certain degree, yes. Again, if you don't have anybody else who can play, then that's what it looks like. These guys, we got seven guys we think can play for us. We need to get them in the game. I think we're doing a good job of it. “

So, what does Richt see as the problem on the offensive line?

“I see we may block a guy to the perimeter, we don't get the perimeter blocking that would score a touchdown if everybody got their hat on the right people, block like they should,” Richt said. “I've seen quarterbacks bail out of a perfectly good pocket, start a scramble when they didn't need to do that. I'm not saying that's happening every down, but it's a little bit of everybody taking a turn. When you do that in offensive football, you're not going to continue drives.

“You throw a couple dropped balls, couple missed pass, a couple penalties, all of a sudden you're punting. That's what happened this last game more than anything. Virginia certainly did a good job. They played hard. They played well defensively. No doubt about it. But there were so many unforced errors, so to speak, coaches use the term 'self-inflicted wounds', just way too many of them. When we straighten that out, we'll be pretty good. There's no doubt in my mind we'll be good.”

True freshman TE Brevin Jordan has led the team in receptions, with 18 catches through 7 games, and Richt said he couldn’t be more pleased with his progress.

"A lot of people thought he was the best tight end prospect in America,” Richt said of Jordan. “We thought that. Actually, our number one and two, the guys we thought were the two best tight ends in America are here. (Will) Mallory we feel the same way about."

"The position that Brevin is in, what we call our F for the most part, he plays tight end, he'll play fullback, off position, he'll spread out, that position is the position that fits his skill set the best,” Richt said. “That's why he is starting right now. Because we had some injuries at the tight end position with (Brian) Polendey, Michael (Irvin), when those two got hurt, Mallory had to play backup to Brevin. If everybody was healthy, we would have Mallory split out more like we had Njoku. Mallory is doing things not in his skill set yet because he still has to grow physically.

“If everybody was healthy right now on our tight end board, in our current team, Mallory would be getting a lot more work as a split receiver. As it is, he has to get by Brevin. Brevin has done a great job physically and mentally. I think a lot of freshmen hit the wall. I think there's been times I've seen all them struggle a little bit through the practices and things of that nature because it's a grind for them. But this open date couldn't have come at a better time for those guys."

Can we get a 'Fire CoRch Rix' story now? 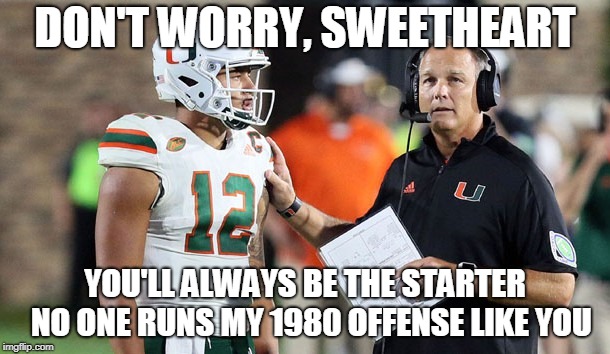 Last edited: Oct 17, 2018
Blah, blah blah and more blah!
Just root the team on , whoever the starter is....we want them both to play well
Done with this guy. Fly the fckn banners. We will never win anything with him. He just doesn’t have it.
Oh fvck off. Richt is exposing himself as a bozo.
Whenever someone says "this isn't personal" it's almost always personal.
I have maintained that I was a Richt fan from jump start. However, the more I hear him talk recently, the more I get the vibe of a crooked politician!
Richt is actually retarded. The more he talks it becomes more clear.

His 'coaching' moves are that of someone suffering from CTE.
"Miami is still rotating heavily on the O-Line, but Richt doesn’t see that as a problem."
Of course he doesn't.

"Is this move back to Rosier permanent? "I don’t know the best way to answer the question."
That's for god damn sure.

"True freshman TE Brevin Jordan has led the team in receptions, with 18 catches through 7 games, and Richt said he couldn’t be more pleased with his progress."
Progress? Richt just switched to a QB who won't throw passes over the middle of the field or to Brevin.

I never thought we'd be here with Richt. I knew things would get bad at times. But not this bad.
Last edited: Oct 17, 2018
tell richt to meet me in the blue lot
Maybe I'm a fool, but I think he comes across as genuine. I truly think he cares about his guys and I am typically VERY suspicious of zealots who are so openly religious.

paksat said:
tell richt to meet me in the blue lot
Click to expand...

#Bluelotboyz, #shank you in the blue, #juanfromlittlehavanah So entertaining.
Fantastic.

Spurrier had a platoon system, too.

The difference is Spurrier knew how to run an offense and could lay 50 on a team without working too hard.

SWFLSWAGG17 said:
Maybe I'm a fool, but I think he comes across as genuine. I truly think he cares about his guys and I am typically VERY suspicious of zealots who are so openly religious.
Click to expand...

Who gives a flying **** if he cares, he ain't cutting it now and won't get us too where we want to get which is winning Fuckin championships, not losing to garbage ass teams we should destroy like Virginia, and Pitt, and getting dicked by good teams, tired of this Fuckin bullshit man

Spurrier had a platoon system, too.

The difference is Spurrier knew how to run an offense and could lay 50 on a team without working too hard.