It’s Friday. We ain’t got no football this weekend. We ain’t got s**t to do. But I do have yet another impact freshman to introduce. With a brief stint as a childhood actor, this Army All-American is no stranger to the spotlight. But he wants to make it clear that nothing about him is an act. If you don’t already know the name, it’s time to wake up. From California, by way of the factory known as IMG Academy, Freshman Friday welcomes Brian Hightower.

Look up wide receiver and you’ll see something that looks like Brian Hightower. He’s a prototype wide receiver standing at 6’3” and 210 lbs. He vaulted onto the scene with 71 catches, 1344 yards and 14 TD catches in his sophomore year at Calabasas High School in California. For his final two years of high school, he decided to go across country to IMG Academy and play with some of the country’s top talent. While his numbers may have fell victim to a star-studded lineup, his time at IMG paid huge dividends in his overall progression as a player. IMG is second to none in high school when it comes to facilities, competition and player development. Combine that level of training with the ever-so-cool and unfazed demeanor of Hightower, and Miami has found themselves a receiver who is well beyond his years.

Hightower knows how to use every bit of his 6’3” frame to subtly shield off defenders and snare contested balls. He’s one of the best fade ball guys in this entire 2018 recruiting class. He never seems to break a sweat with the ball in the air. He’s the kind of receiver that is a QB’s best friend because you know you can put it just about anywhere and know that Brian is going to put himself in position to come down with the ball.

All his movements seem so effortless, and his strides are so long that his speed seems to surprise opposing DB’s. He’s so dang smooth that it may look like he’s not really trying. I say he’s just comfortable out there. He’s no burner, but he’s plenty fast enough to effectively stretch the defense. While it’s great that he is an exceptional 50/50 ball guy, I’d like to see him become a little more explosive and decisive in and out of his breaks to consistently create separation in his routes. He does have the size and skillset to dominate pressing corners. He uses active hands and feet to defeat press, which is something a lot of young receivers struggle with. He is an excellent blocker on the outside and more than willing to get a little dirty. He’s not overwhelmingly great in too many areas, but he’s good in just about every facet of playing wideout. It’s just natural for him, and it’s easy to tell that he’s very coachable. His skillset, work ethic and football IQ set Hightower up to be a complete wide receiver.

Hightower showed his maturity from the second he set foot on campus in the spring as an early enrollee. As cool a customer as he is, he is a fiery competitor and is ready to compete for serious playing time. He was the unquestioned star of the spring game with several catches down the field, including a pair of touchdowns. It’s safe to say he belongs. I mentioned his blocking prowess, which I personally saw a bit of during the spring game. That is something that we all know Coach Dugans loves and could help solidify substantial playing time this year for Hightower.

Brian Hightower is about as physically and mentally ready as a true freshman wide receiver can get. I’d say he’s probably already in place to be well within the wide receiver rotation from the start of fall camp. While Jeff Thomas, Mike Harley, Mark Pope and company may be seen on the outside at times this year, the main outside receivers right now (at either X Or Y) look to be Richards, Cager, Langham and the wild card, Evidence Njoku. I like Hightower’s chances to make a name for himself within this group. I see Hightower finding his way to the end zone a couple times in 2018. I, among many others, have spoken extremely high of this group of freshman wide outs, and to me, Brian Hightower has the most complete package to eventually fill the Ahmmon Richards role as a WR1 in the future. I see him being a go-to option on the outside for years to come. A star from a young age, Hightower isn’t satisfied with being behind the scenes. Number 7 is ready to land a leading role in the Miami Hurricanes offense. Hollywood is coming to Coral Gables in 2018.

View as thread
STUD, body control/hands/size.
True Cane through and through.
He got separation consistently against some of the top and fastest dbs in the country at the army all America practices. He definitely knows how to do that
Not as sold on his hands as many on here are.

You should add some water to that HALF EMPTY glass.

Prayers sent....the merry men are about to slaughter you
Best WR of the freshman class imo
What has he acted in?
Advertisement
Just a couple small films. Nothing really noteworthy.


tsimonitis said:
What has he acted in?
Click to expand...

Calling Mark Duper.
What he did in the spring is a true foreshadowing of what's to come for this young man. Though he was highly rated, in my mind, he was still underrated.

The kid is a f'ucking match up nightmare!

He DOMINATED the practices and the actual game during the Army All-American week; only to continue the same type of performance during his first taste of football at the collegiate level. It's like the All-American game was Garvin's strip sack against Virginia Tech, and spring camp was Garvin's strip sack against Notre Lame; back to back performances with the same result.......Domination! 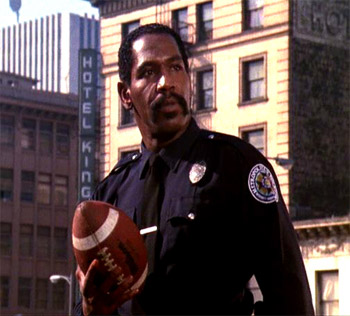 Our receiving core is in great shape for years to come. The 6 we got last year (including TEs) are gonna be legit come 2021. Hopefully Voldemort still hangin round Bama when that time comes. No ceiling on Hightower
He's going to be a good one for us - and he'll definitely be playing this year - and producing.
Bigger receiver that moves well and is consistent and has a knack for making big plays down the field. I’m very high on Hightower. Don’t make the mistake and thinking just because of his size that he’s a possession receiver. This kid can move and is actually a deep ball threat
I see Chris T Jones with better speed. He also has this effortless smoothness about him that reminds me of Reggie Wayne.

The thing with true freshmen is that no matter how talented they are, you just never know how long it will take them to make the adjustment to big time college football. In the case of Hightower it seems to have clicked immediately. At the risk of getting ahead of myself, I really think that we got a really really good one in Hightower.
Advertisement

jw410 said:
As long as he doesn't have Breshard Perriman hands we can work
Click to expand...

I remember way back in 2000 when Andre Johnson was a redshirt freshman he had his struggles in terms of being consistent catching the ball. I also distinctly remember that The Franchise was calling him "Roberto Duran" because Duran's nickname was "Hands of Stone" LMAO Remember that at that time, Andre Johnson had not yet broken out and was receiving very limited playing time behind Reggie Wayne, Santana Moss, Daryl Jones and Andre King as well if I'm not mistaken.

tsimonitis said:
What has he acted in?
Click to expand...

Your Mom was the co-star, you miss it?
Going to be yet another stud WR that Miami will have produced. I can see him balling out so well no way he’s here past Year 3. Could easily climb into AR82’s role come next season. I’m stoked about what he brings to the field, and know he will give Rosier a calming effect with his huge catch radius. Between these young lads coming in to rule the roost both our WR and TE positions are loaded for the next several years.
You must log in or register to reply here.
Share:
Facebook Twitter Reddit WhatsApp Email Share Link