Stefan Adams
May 8, 2019
2020 Mallard Creek 3-star DE Quentin Williams has had a busy spring of recruiting, making multiple trips to see UNC, while also attending the campuses of Tennessee and Virginia Tech. His most recent visit, though, was to Coral Gables to check out the Miami Hurricanes a few weeks back, and Williams reflected on his time at the U.

“It was great,” Williams said. “I talked to coach (Todd) Stroud for a while and coach (Blake) Baker. Got to check out the city and the campus was nice. I loved it.”

Both DC Baker and DL coach Stroud have been pitching the 6-3, 230 pound prospect on his fit in the Miami defense and see him as a pass-rushing force.

“They like my versatility,” Williams said of Miami. “I can stand up or get in a 3-point. They like my ability to get to the QB.”

Joining Williams on the trip was his father and uncle. The elder Williams is a long-time Hurricanes fan from North Carolina, so he doesn’t get to see Miami’s campus very often; he actually might have enjoyed the visit more than his son.

“He loved it of course,” Williams said of his dad. “Miami football, my dad raised me like that. He was out there pointing out all the players.”

A big selling point for the Hurricanes in recruiting since its inception last fall has been the indoor practice facility, and the staff made sure to give Williams a tour of the building as part of the experience of being on campus.

“The indoor facility is nice, nicer than I expected,” Williams said.

So, did the visit ultimately move Miami up in his mind?

“Definitely. I just wanted to see it and talk to coaches in person, let them see me in person,” Williams said. “I look forward to getting back down for an official.”

In terms of other schools that are after Williams right now, he cites three ACC programs and a Big 12 school that are in constant contact with him.

“I’m going to visit Louisville and WVU for sure,” Williams said of his future visits. “I may do UNC and VT again, but I've been to both a lot.”

As for his off-season, Williams says his goals involve working to improve his game and focusing on narrowing down his list of schools.

“I'm just working on school and starting spring ball now,” Williams said. “I'll have a top 5 out some time soon.”

View as thread
I would like him, Trenton Simpson and Kendrick billingsley-Jones from the Queen City this cycle!
Drake Maye, 2021 QB from Myers Park is the goods!
Yes please.. him and the NC LB would be a nice get
Last edited: May 10, 2019

Weird. Top 5 of Miami, UNC, VT, Louisville, and West Va. Maybe he deleted the tweet? I’ll try to fix it.

D RevLee said:
If this is his top 5 we are in there like swimwear
Click to expand...

Meh UNC probably leading right now for him
Kid is an absolute beast.
He’s probably staying home unless UNC has another year like last year. We need his teammate though.

TallyCane said:
He’s probably staying home unless UNC has another year like last year. We need his teammate though.
Click to expand...

Does anyone in their right mind think 68-year old retread Mack Brown is the answer to turning UNC around?

gcane44 said:
Does anyone in their right mind think 68-year old retread Mack Brown is the answer to turning UNC around?
Click to expand... 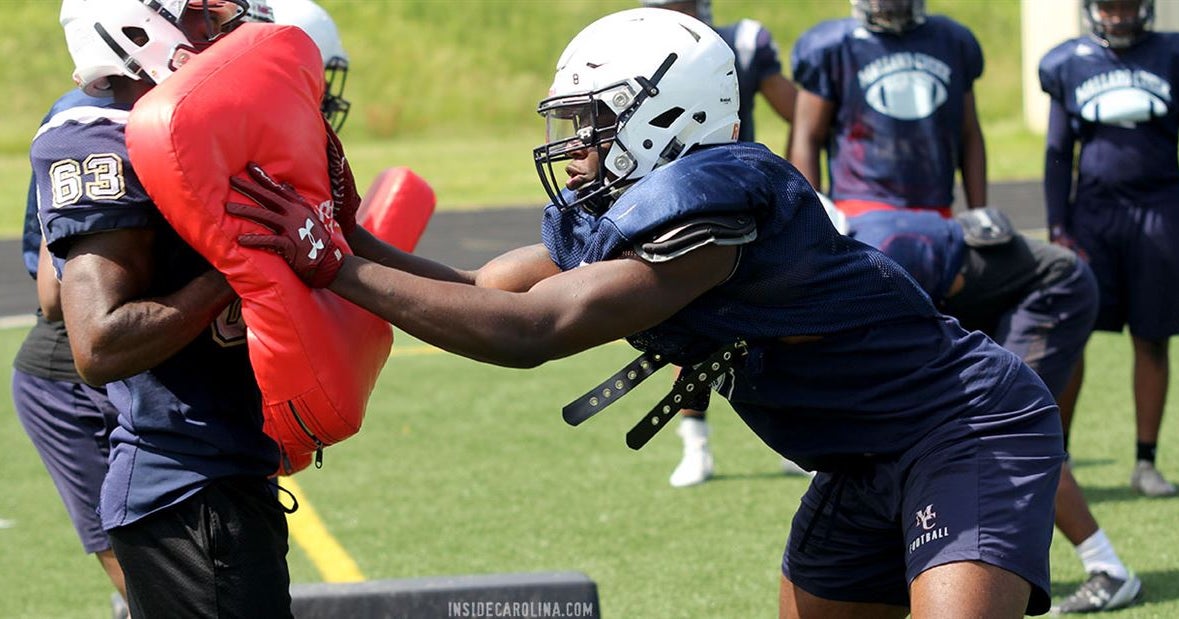 
Williams has an official visit scheduled to Miami, the school his father is a big fan of, for June 21. He's also finalizing June dates with West Virginia.

"On the official, I'll focus on how they play, how the players are, how everybody around them is," Williams said. "I want to see if it's family oriented or not."

Even if he's unable to squeeze in all five of his official visits, Williams will still commit before the season.

"A few of those places I've already been to already, so I've already gotten a feel for how their program is," Williams said.

With that said, Williams's primary focus during the next few months is visiting the two members of his top five that he has yet to visit, Louisville and West Virginia.

When Williams officially visits Miami, teammate Trenton Simpson will also be on an official trip to the school.

Miami is one of two schools (UNC is the other) that both Simpson and Williams are considering. According to Williams, he and Simpson haven't discussed attending the same college. But, if Miami or UNC happen to land Simpson first, it will provide that school with a bonus in its courting of Williams.

"Yea, it would [help]," Williams said. "It would make it more comfortable [with that school] knowing that I'll have a teammate that I've already played with that's going to a school that I'm considering."
I like our chances

Cuban-Cane said:
UNC is recruiting well but if we wanna be elite we gonna have to be able to beat them out for whoever we want
Click to expand...

Yeah they got the new regime bump. Once people see it’s still the same Mack Brown, they will fold
If we truly push for this kid and leave no doubt in his mind that we want him then we will get him.
Once we spank unc I like our chances even more. Even though I think he is lower on our board and might not be a take right now

A1cane said:
Once we spank unc I like our chances even more. Even though I think he is lower on our board and might not be a take right now
Click to expand...

Yeah I fully expect us to again dominate them all game long like we did last year...