Corners could prove to be key for Miami's 2017 defense

Corners could prove to be key for Miami's 2017 defense

Peter Ariz
Aug 8, 2017
The Miami Hurricanes defense returns a strong front seven for the 2017 season -- a group that helped catapult the Canes last season into a respected defense once again. Where the change comes for the defense is mainly in the secondary, highlighted by two experienced newcomers at the cornerback position.

With Corn Elder and Adrian Colbert on to the next level, Miami coaches went out and got junior college CB Jhavonte Dean and grad transfer Dee Delaney from The Citadel. Sophomore Malek Young proved his worth near the end of last season, starting multiple games for the Canes, and impressing in the early part of fall camp as well -- he is in the mix for a starting spot. Add freshman Trajan Bandy and junior Mike Jackson to the mix and that is the expected rotation at corner.

The biggest question regarding Delaney was if there would be any sort of adjustment period to the speed of the game at Miami in comparison to his time at the FCS program. According to himself and cornerbacks coach Mike Rumph, his transition has been more than smooth.

"A pleasant surprise -- just very strong and physical and athletic, but most of all he's almost taken control of the room already. He's a guy who's disciplined because he's coming from The Citadel, he's a little older, and he's urgent. He's similar to Adrian Colbert last year," Rumph said of the 200-pound corner.

"He looked the part, but I didn't know he was as intuitive as he is. He asks a lot of questions, good questions, and it's really pertaining to the rookies and what they need to know. So he's kinda showing the room how to ask questions even though he already knows the answer to them," he added.

If you're looking for a potential surprise player at the position, look no further than Mike Jackson, who has played sparingly over his first two seasons, but has been steadily improving according to Rumph.

"Michael's been pushing, man. He's done it in the spring and he started where he left off in the spring. Him and Dee Delaney have a good chemistry working together. He's urgent and physical -- Mike understands triple times what we want him to do," Rumph said.

Trajan Bandy has people inside the program excited as he's already showcasing his football instincts that shined through in high school. Don't let his 5'9" height fool you either, as Coach Rumph explained he is not stepping down from any challenge.

"Physical. He probably gets his hands on the receivers very single time when we're playing press, which is amazing. He has a knack for making a play on the deep ball as well," Rumph said on Bandy.

View as thread
Pete, do you even sleep anymore?
Bandy isn't any shorter than that little turd Joyner from FSU, and that guy was a major pain in my ass.
probably Delaney's most overlooked skill set is the discipline he developed at The Citadel. We've all been talking about how he could've been drafted this year, his size, his instincts, but I'm not sure I've read anything up to now talking about the discipline and work ethic he's undoubtedly developed over the last several years. This gets me even more excited about having him on the team. Showing the young players what it takes to take care of business on the field, weight room, in school, and the film room is extremely important. Off the top of my head I'm not sure we have had a stand out leader for the team at the DB position in a long time.

Thinking about it even further, the leadership on the team this year is shaping out nicely over several positions.

Still missing the big one at QB

All of those guys are great examples of work ethic, coachability, and leadership. They represent the U at a high standard on and off the field.
All bandy did in HS was make plays. I'm in south Florida all the time for business and when I have a chance I stop by the high school games. Kid was the goods in HS. I believe his game will transition over to college fairly easily. Honey Badger 2.0

Bandy gonna be a torpedo like missile on punt coverage. He's gonna knock someone out this year, and they won't even see him coming. Someone come find this post for me when he does it. 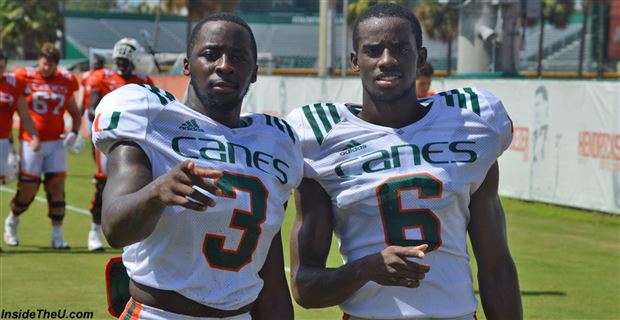 This defense is gonna be nasty

Front 7 that will be top 5 in the country + secondary that will be top 3/4 in conference = best defense in ACC. Not worried about Delaney at all. A lot will ride on Dean stepping up and keeping injuries to a minimum. Also, these guys are naturally more aggressive than last year's group, and they don't have to cover for young guys making mistakes up front. I hope/expect that translates into a lot more interceptions.

Back in the early 2000's, I remember one commentator referring to us as "The fastest, nastiest, stingiest defense I've ever seen." I think this group of players are perfectly capable of eliciting similar compliments.
After years of hearing about all our shortcomings and having only hope to finish above .500, I can wait till the season starts. We are a Miami team again with pro caliber talent all over. Considering sacks, TFL and turnovers, no reason why Bethune Cookman shouldn't end in the negative offensively.

g8rh8rMD said:
Bandy gonna be a torpedo like missile on punt coverage. He's gonna knock someone out this year, and they won't even see him coming. Someone come find this post for me when he does it.
Click to expand...

How would you like to be fielding a kick with Bandy and Carter running at you full speed?

"Sleep is the cousin of death."

Nas
I want that dude that does the "gooooaaaaaaallllll" call in soccer to do Delaney's first interception as a Cane. Like an 80 yard int return for a TD and my man yells "Deeeeeeeeellllllaaaaaaaannnnnnneeeeeeeeyyyyy!!!!!!" the whole run back. Yeah, and I want it at FSU. cue the dog and little boy praying gif.
You must log in or register to reply here.
Share:
Facebook Twitter Reddit Pinterest Tumblr WhatsApp Email Link