Hundley wasted little time pledging to Miami, giving the staff his commitment today just one day after receiving his offer. Hundley doesn’t have much film publicly available, but he impressed multiple coaching staffs in spring practice at Booker T. Washington so far this year. He landed his first Power 5 offer earlier this month from LSU, and then programs like Kentucky, Louisville, and Syracuse quickly followed suit.

In his less than one minute of tape, Hundley is shown to be a powerful interior lineman at the point of attack that does an outstanding job of shedding blockers to hit his target. Shows ability to run down a play in open-field pursuit. Early signs that he is a technician with his hands. One former coach described him to me as a "freak" athlete and it's clear his athleticism is in the upper-tier for a big man pushing 270 pounds. Hundley is also a standout basketball player.

Hundley’s commitment brings the total class numbers to 9 and he is the second defensive tackle, joining Southwest Miami (FL) 4-star Savion Collins. The Canes would love to hold on to both and pick up Miami Palmetto (FL) 4-star Leonard Taylor at the position as well to close out the class at DT. Taylor made multiple visits to Miami this spring, and UM is in a good spot for Taylor right now, but watch out for a program like Auburn. Taylor is in the process of setting a visit there as of now and the Tigers want him badly.

Other recent offers this spring have gone out to Armwood (FL) 4-star Desmond Watson and Terrebonne (LA) 4-star Maason Smith, but neither have visited at this point and it’s hard to say where Miami is in either’s mind.

Assuming there’s no attrition, the DT’s from the current roster that will still be on campus when Collins arrives in 2021 are Nesta Silvera, Jordan Miller, Jared Harrison-Hunte, Jalar Holley, and Jason Blissett. In 2020, UM has pledges from Tre'von Riggins and Willie Moise, with more additions possible in the future.

Hundley will battle with all these players and Collins for snaps in the rotation as a freshman and is physically developed enough at this point to have a chance at seeing solid playing time early on by the time he hits campus. With his talent, there’s no reason Hundley isn’t battling to start by his sophomore season.

View as thread
Nice write up. Hopefully D-Jax can keep the bagmen away.

Go Canes
A world away from when coach kool was here.
Great player, and more importantly looks like a young man that has room to grow!
Get Taylor and SHUT. IT. DOWN. It's not every year that three of the best DT's in America play for high schools that are located South of N.W. 20th St.

Is Taylor supposed to be leaning to us?
Always a good day when we get commit, esp when from home.
Love the commit, although that Dream School line was funny 😂
Nice commit! We haven't had the best luck keeping DTs committed for 2 straight years. Got to starting winning on the field and lock down the 20 and 21 classes.
Advertisement
Since when did our 2021 kids become #21Savages? What was it before? I know 2020 kids are #Category20 but #21Savages is dope.
The U Welcomes You
Currently lists himself at 275.
Welcome to the U🙌🙌🙌
Yes please more great linemen, welcome to the U!

Collins, Hundley and Taylor would be an insane DT haul. These are the types of battles we need to start winning more consistently for TNM to actually mean something.

grover said:
Nice commit! We haven't had the best luck keeping DTs committed for 2 straight years. Got to starting winning on the field and lock down the 20 and 21 classes.
Click to expand...

Yep, beat Florida and have a year with inspired play and they will come.
Advertisement
Sounds like a Miami DT - strong, fast athlete who can disrupt the middle and bring havoc to the backfield. As important as QB is, DT is the essential position for Miami Hurricane football. If LSU is after him, that is good sign. Dline and secondary are positions they are sound evaluators of.
Kid is gonna be special... He's gonna get better.
We’re forming a formidable defensive front seven . They’ll be very physical with an attitude when we platoon these dudes those next studs coming will looking to whip someone’s arzz .

Imagine the third unit coming off as the forth quarter starts and the first team comes in all fresh.

Boys Diaz is building D for National Championships , this is his focus and Enos will worry about running up scores.

Let there be no DOUBT we will be running up scores and kicking sand in people’s face not giving a hoot.

THIS IS WHO WE ALWAYS WERE , WITHOUT REMORSE. 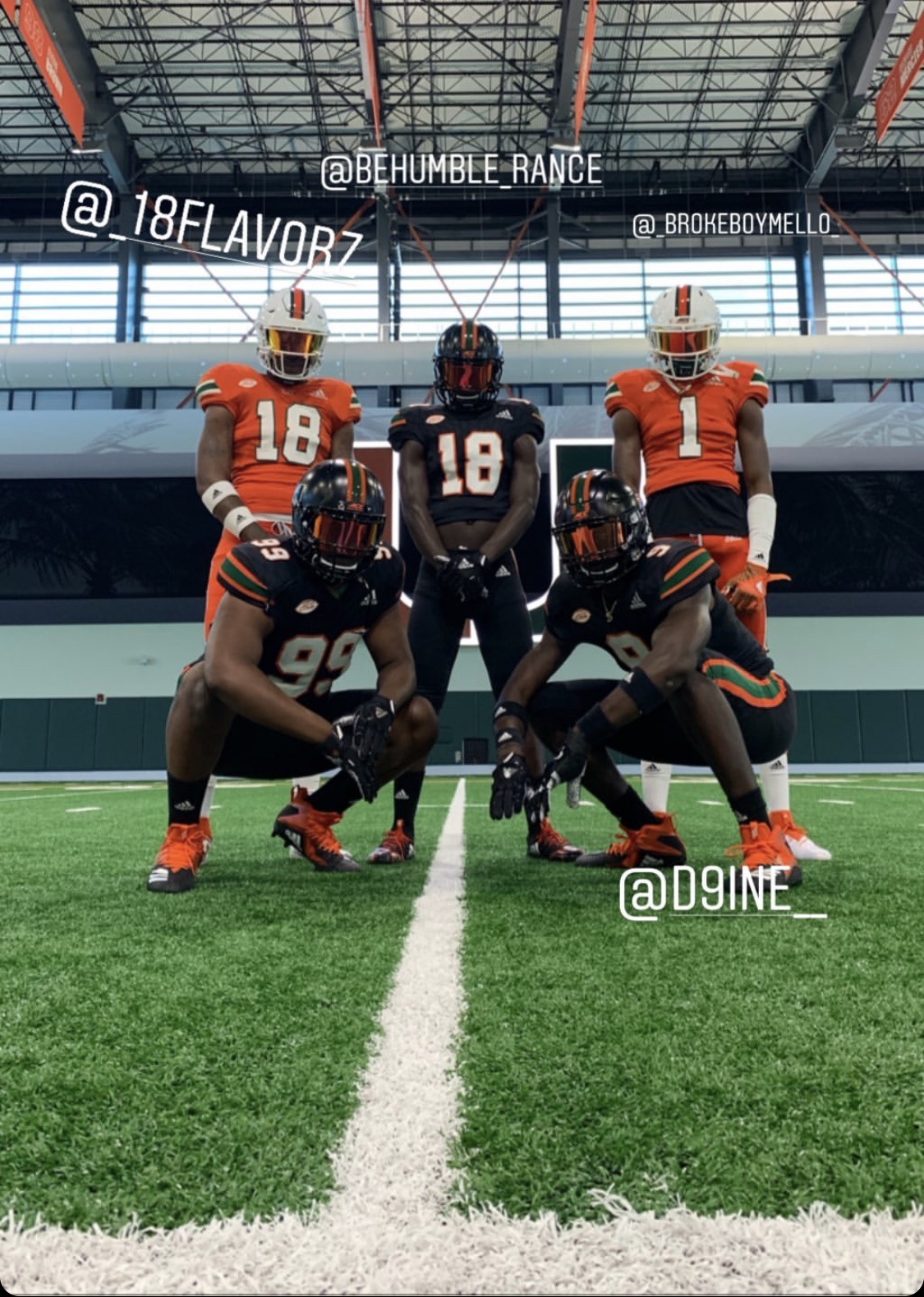 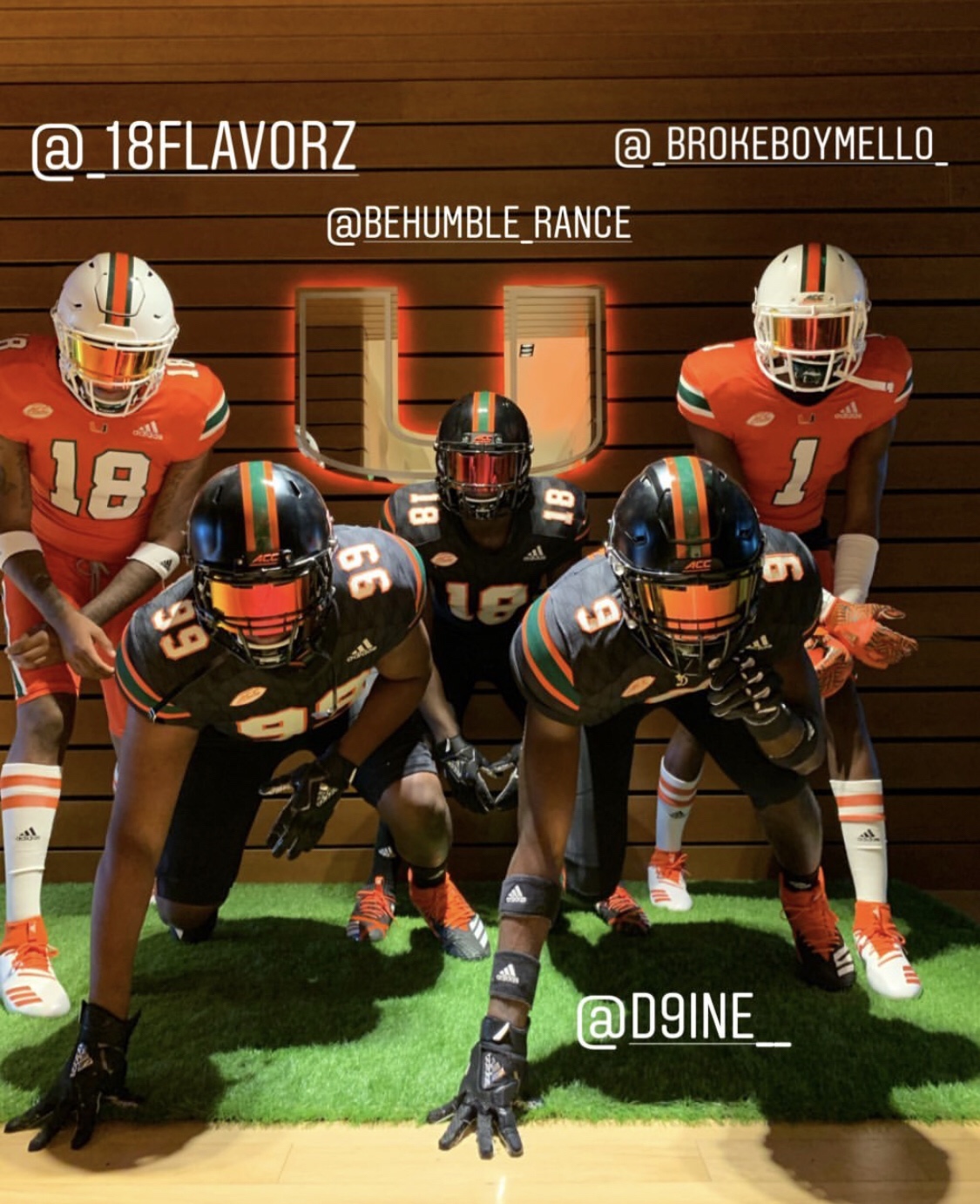