Stefan Adams
May 2, 2018
2020 Cocoa ATH Caziah Holmes already possesses a Miami offer and has visited the Canes more than any other program. His most recent visit was for the spring game and afterward he told CIS that UM was his leader.

“The spring game visit went great, also meeting the coaches and meeting players in my recruiting class was really nice,” Holmes said. “The best part was when I got to walk around the field and looking and imagining the atmosphere that I could possibly play at. My interest in Miami is high and I'll probably take another visit in the summer. (Miami is) number 1.”

The 6’0” 180 pounder is in frequent contact with Mark Richt’s coaching staff, and safeties coach Ephraim Banda has taken the lead in Holmes’ recruitment.

“I talk to coach Banda mostly, but pretty much most of the coaches,” Holmes said. “My relationship with the coaches is that they are like family.”

As one of the best athletes on the field, Holmes plays all over the place for Cocoa. He spent some time at running back as a sophomore, but mainly played corner and showed out in his first year at the position.

“My season went great and my team made it to states,” Holmes said. “I feel like I performed great this season playing a position I’ve never played.”

So, where have the Canes been recruiting him at?

“Mostly as an ATH and they say I'll fit into the team nicely,” Holmes said. “They have been my dream school since I was little and I love the history about Miami.”

While Holmes plans no other visits at the moment, other Power 5 schools that have offered the talented athlete include Florida, Rutgers, Kentucky, Maryland, and Syracuse. Holmes plans to make an early decision and his school of choice will make him feel valued, sport a great family environment, and have solid academics.

View as thread
Sounds like a CANE to me already

He's a burner.
The infamous dream school. Hope he picks Miami
Being from Cocoa and I've had two sons that played with him the kid is the real deal and I could see him as a Cane talented and fast great kid love to watch him play and would love to see him in Miami 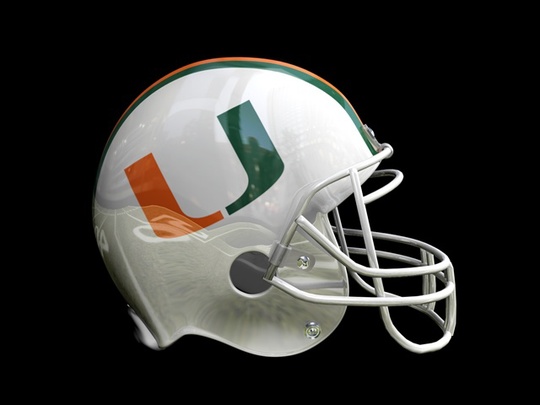 Sounds good but a long way to go. I'll get excited around this time next year. Too many heartbreaks investing in kids a couple years away.
Any relation to John?
10.60 is his best 100. Keep the speed coming.

He is young, and it looks like his technique needs some more refining....which is a good thing at this stage. He is still raw and is an athlete who looks like he has good instincts. Being that he's already 6 ft is even better. I look forward to this young man developing.
Check out his GPA as well. Kid is a STUDENT-Athlete. Straight A type of kid. Will be a great get for Banda and Crew.
I am happ we’re back to recruiting the north east coast of Florida. Move straight across the state to Orlando and Tampa and will be good
You must log in or register to reply here.
Share:
Facebook Twitter Reddit Pinterest Tumblr WhatsApp Email Share Link