Eric McAlister is a 6’3 180 WR from Azle, Texas and plays for Azle High school. Really productive kid, had 63 receptions for 1449 yards and 23 TDs. Basketball players and high jumper with a 5-10 his sophmore year so he’s probably going to need weight room work since he participates in track. Long kid who high points well, can track, and looks to have good hands. Really good at getting vertical and putting a DB in a rough spot. Only thing I see is that he needs to add strength/weight, a bit of route refinement, and open up his hips a little more but I’m shocked he’s so under recruited and I know it’s not an academic issue since he’s got offers from 2 academies. 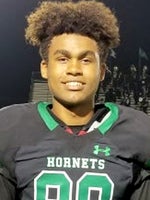 Not only was play #1 a HUGE PLAY.....side note is that the Sideline was going NUTS....usually a good indicator that the kids teammates like him and ride with him (which isn't always the case).

Kid is a take IMO

Edit: Maybe it's the level of competition, but I'll you what, our last take of the 2020 class "K Smith" is making me question the old logic of a kid being no good if he hasn't competed against the best of the best in HS. Some kids just rise to the occasion and raise their level of play as the competition gets better and better. To be right outside of Fort Worth and basically, shoot 3hrs within every school like OU, then TxTech, then obviously TCU like 20min away, and then SMU and on and on and on....I just don't see how this kid gets out of TX unless he's pretty much decided to be at one of the academies. But hey, let's shoot our shot and see what happens.
Last edited: May 7, 2020

I happened to stumble upon this kid's Hudl. He is a BEAST and the production (62 catches, 1449 yards, 23 TDs) matches the film. We probably are done with the WR recruiting for this cycle which sucks, because he is DEFINITELY a take IMO.

Sounds like he is headed to Wisconsin, which is pretty dumb because the Badgers are a power running team that throw the ball maybe 20 times a game

He is exactly what Nebraska needs. This guy would be a good cold weather receiver.

Can’t believe he hasn’t found his way to Aledo yet.