First and foremost, I just wanna say that this spring game was night and day from the one I went to in Orlando when iaz was coach. Entire staff brought the energy early during stretches hyping the fans and players up and you could tell the players were ready. And if they weren’t they had better wake up, coaching staff had these guys going fast-paced through the stretches. No breaks, no slacking.

Things I noticed during position group drills was that Bissainthe, although he needs to add weight, looks ready to play early and often just based on how well he moves, quick feet and good acceleration. Didn’t drop a single ball thrown his way in warm-ups either, has great hands. Flagg wearing the neck pad today made so much sense. If there’s anything I’ve learned, it’s that 9/10 modern-day LBs who wear neck pads are not to be trusted to get sideline to sideline and make plays. I’ll eat my crow on him, was excited about him coming out of North Shore but the athleticism just isn’t there.

DBs overall were much improved as everyone I’m sure has noticed. Having seen him in person, Tae looked like he's added some strength overall, especially noticeable in his lower half. He is AGGRESSIVE and FAST coming down hill and is ready to make a big impact this season and beyond. Potential 1st round talent. A lot of those guys looked like they are in the best shape of their lives, Blades and Gil in particular.

Over on the offensive side, Brinson was warming up and had a nice one handed grab. We obviously didn’t see them ball out like we expected in game, but overall the receivers look good in warm up, they track the ball well and everything is caught with hands. The TEs work def translated in the game tho, they’re gonna eat in this offense.

As for Thad, while I know a lot of people were saying (rightly so imo) that he isn’t a #1 back, he has excellent vision and cuts through holes well for his size. Which btw, he looks like 240 lbs of solid muscle. A massive individual who is gonna be the soul crushing, move the chains/break the plane of the endzone back. With Parrish’s skillset, the possible emergence of Perry as a useful piece, and the fact we get Chaney and Rooster back, shįt will look scary.

At one point they were running 1v1 coverage drills with each QB, which I loved, and what I could gather was that Jacolby George will have a great season. He’s quick and sudden with his cuts when he’s running routes and the crowd audibly OOOed when he beat a corner bad on one lol.

When they started running 7-on-7, Steele was out there ripping his defense, and Keontra specifically, a new one for their play. One thing is for certain - you don’t wanna fvck up on an easy assignment with this staff. ZERO slacking and everyone will be held accountable from the top down.

Graves and Jaden Harris pulled up, was nice to see seem on the sideline, McCloud was there at one point and Jaelan joined him. Great to see those guys and all the alum back supporting this program.

At one point before the game started, Dan Radakovich came out and made the rounds to people sitting by the sidelines to greet and thank them for coming out. Mario even came later in the 1st half to hype fans up. Totally different feel in the program, community outreach is more of an emphasis and it’s little things like that that go a long way feeling like you’re part of the family.

Playlist was dope, mainly was a mix of reggaeton and rap. For the most part was representative of Miami and the kind of music recruits are listening to.

Was watching from the east side of the stadium where the defensive sideline was and got to see a lot of guys up close. Elijah Roberts was in a sling, but he looks LARGE. A lot of mass but not sloppy looking at all, built like an absolute unit. He should contribute heavily when he’s back 100% and I can’t wait to see him produce. Same for Nyjalik Kelly too, he is obviously less developed muscularly but he will be a terror in college you can bet on it.

At one point during the game I saw Jason Taylor talking to Thomas Davis about the previous play. Says a lot about what this staff thinks about his ability/potential. Can’t state enough how amazing it is for guys like Taylor to be on staff offering insights to these players. Absolute boss move.

From the QB standpoint, if we can develop Jacurri to be a true dual threat he’ll be a problem for defenses and can potentially be an all-timer at the position for this program. He certainly has the right mindset and maturity level to take in all the coaching and learn from mistakes, time will tell.

Watching Gil and Couch make plays was awesome to see, they’re playing up to their potential it seems. Gil specifically will be a gamer for us, might be the best tackler on the team and has high iq. Everywhere I looked it seemed like he was there to make a play and the TFL he had was big time. Hot take, but he will play his way into All-ACC territory this season.

We have a good transfer in Lichtenstein. He is a solid disrupter on the line and was around the ball making plays. We can def use him, it’ll be nice to see how this DL pans out when we get players back healthy and get more help from the portal.

Overall, great experience and excited for both sides of the ball to show out and for coaches to work their magic. Will def watch the broadcast of the game to see what I missed despite how shįtty ACC network is lol. Nevertheless, big season ahead of us gentleman. Go Canes!
Last edited: Apr 16, 2022

Also here are some pics I took throughout the day 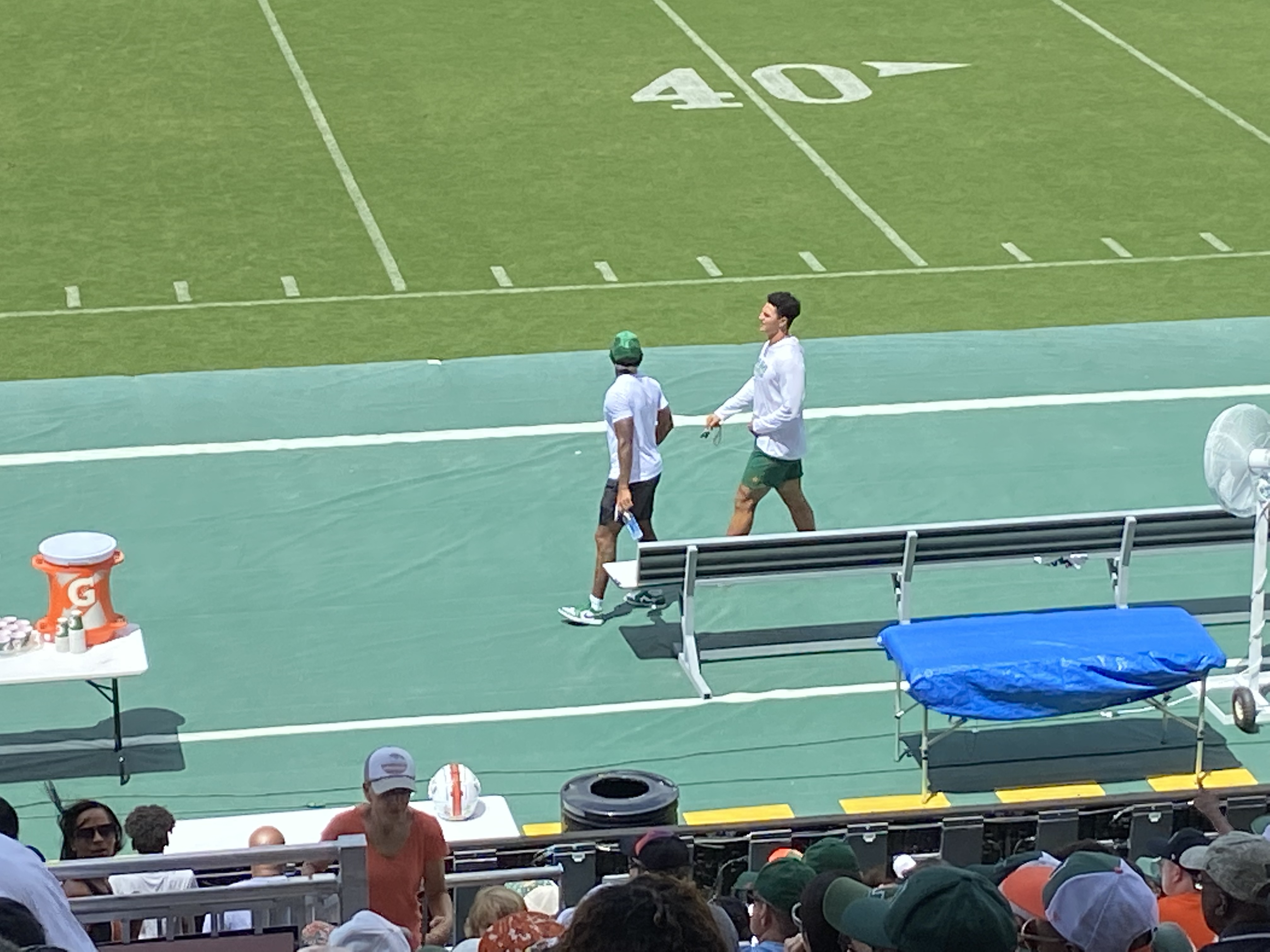 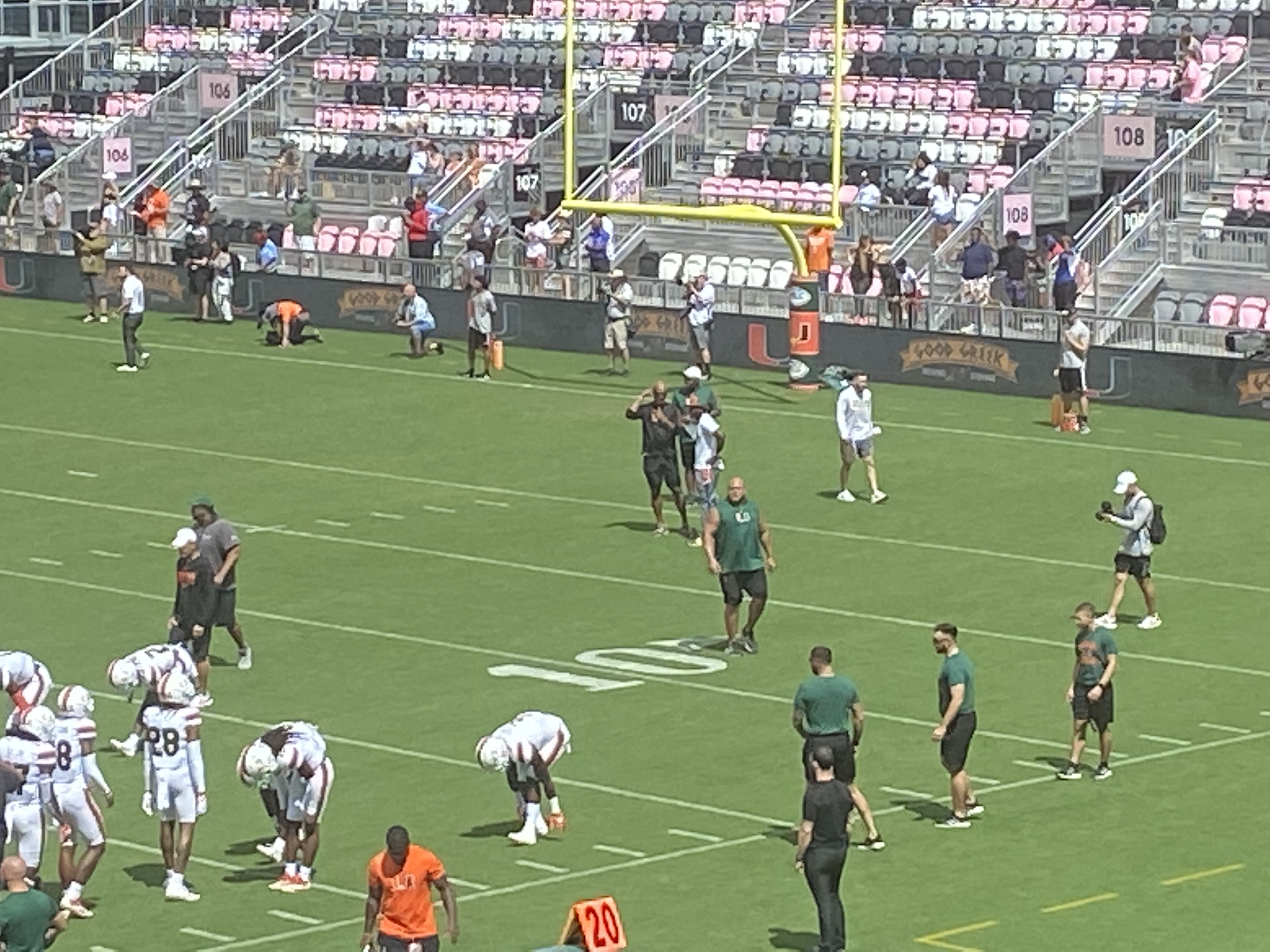 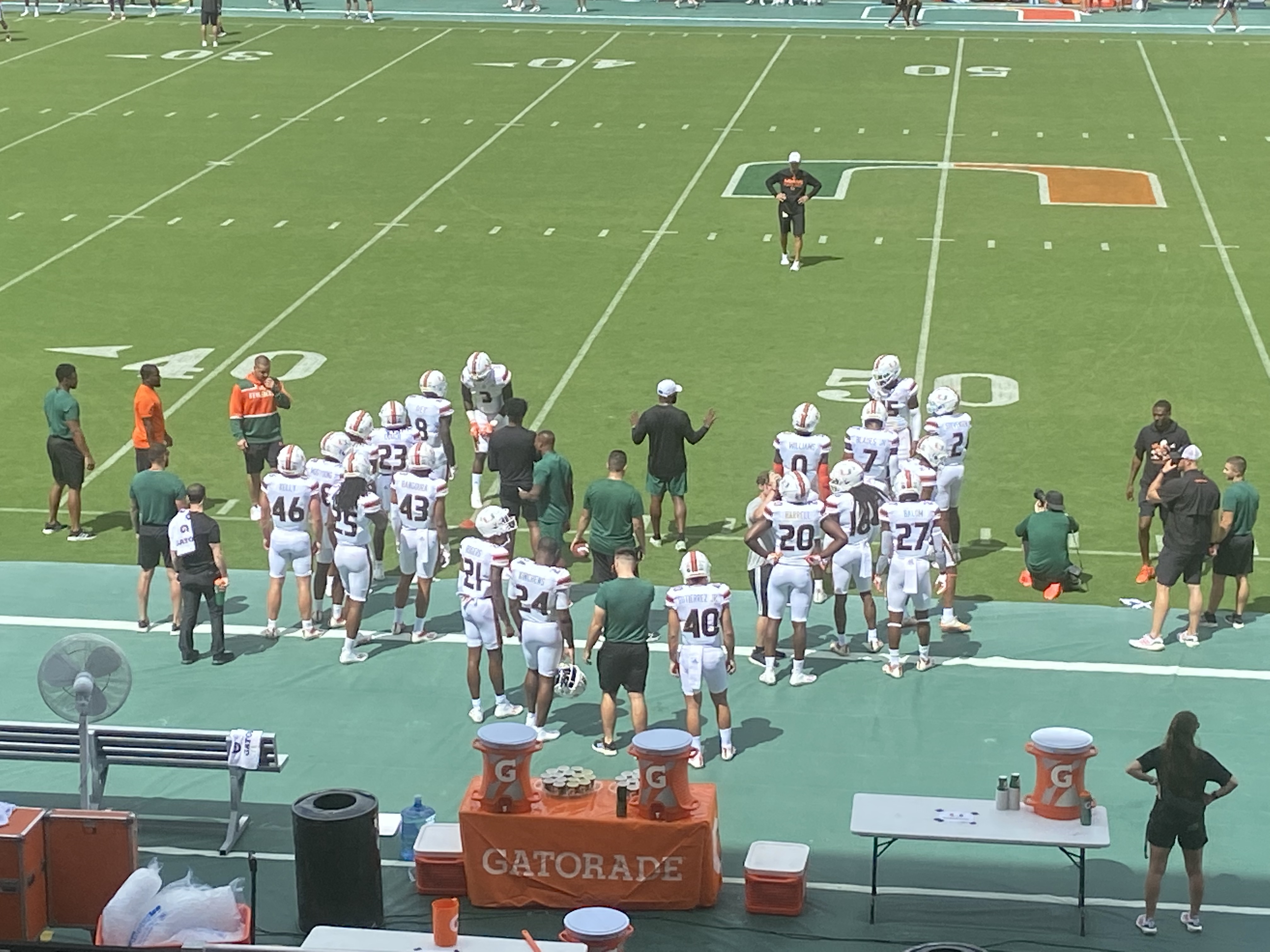 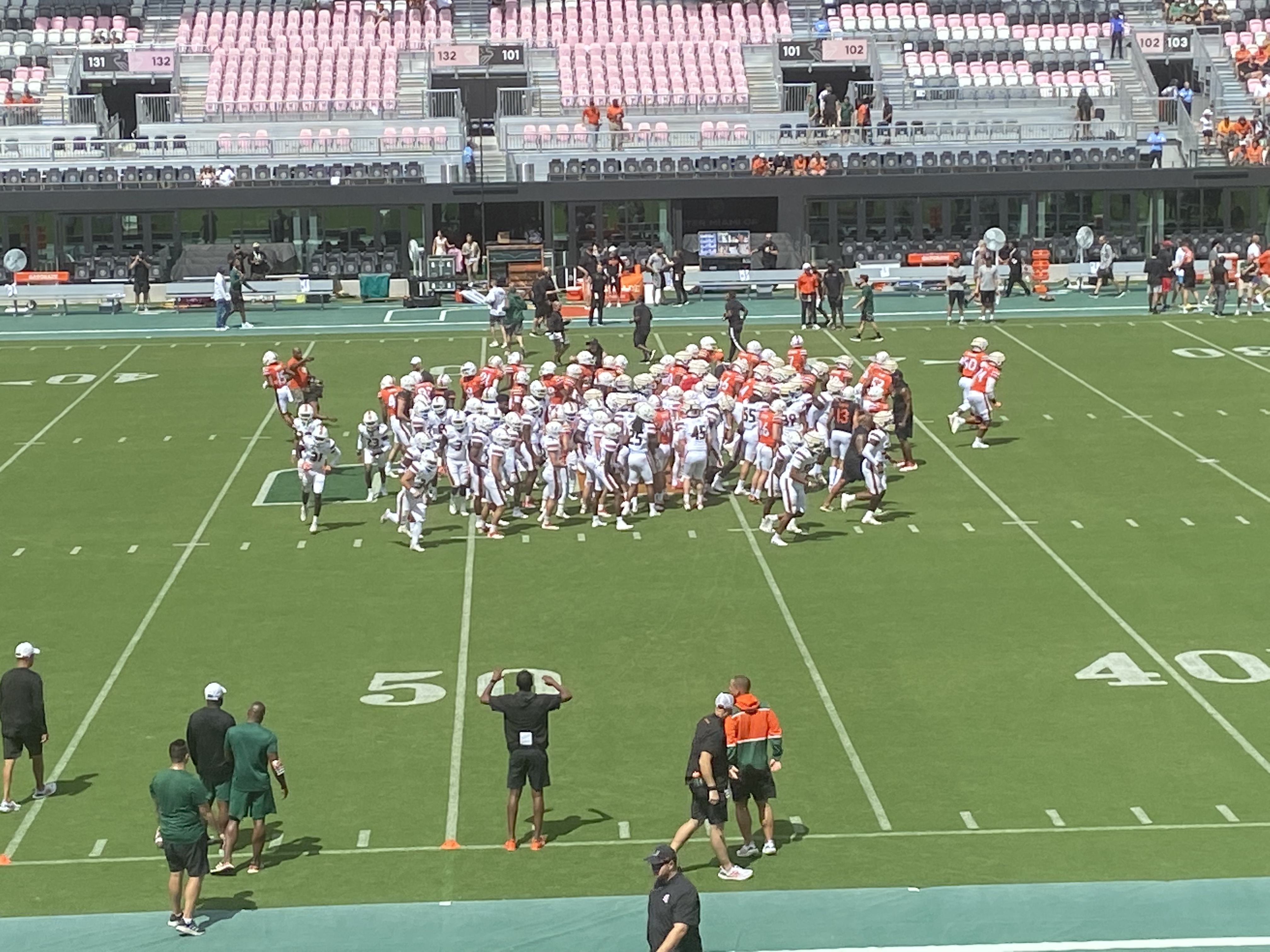 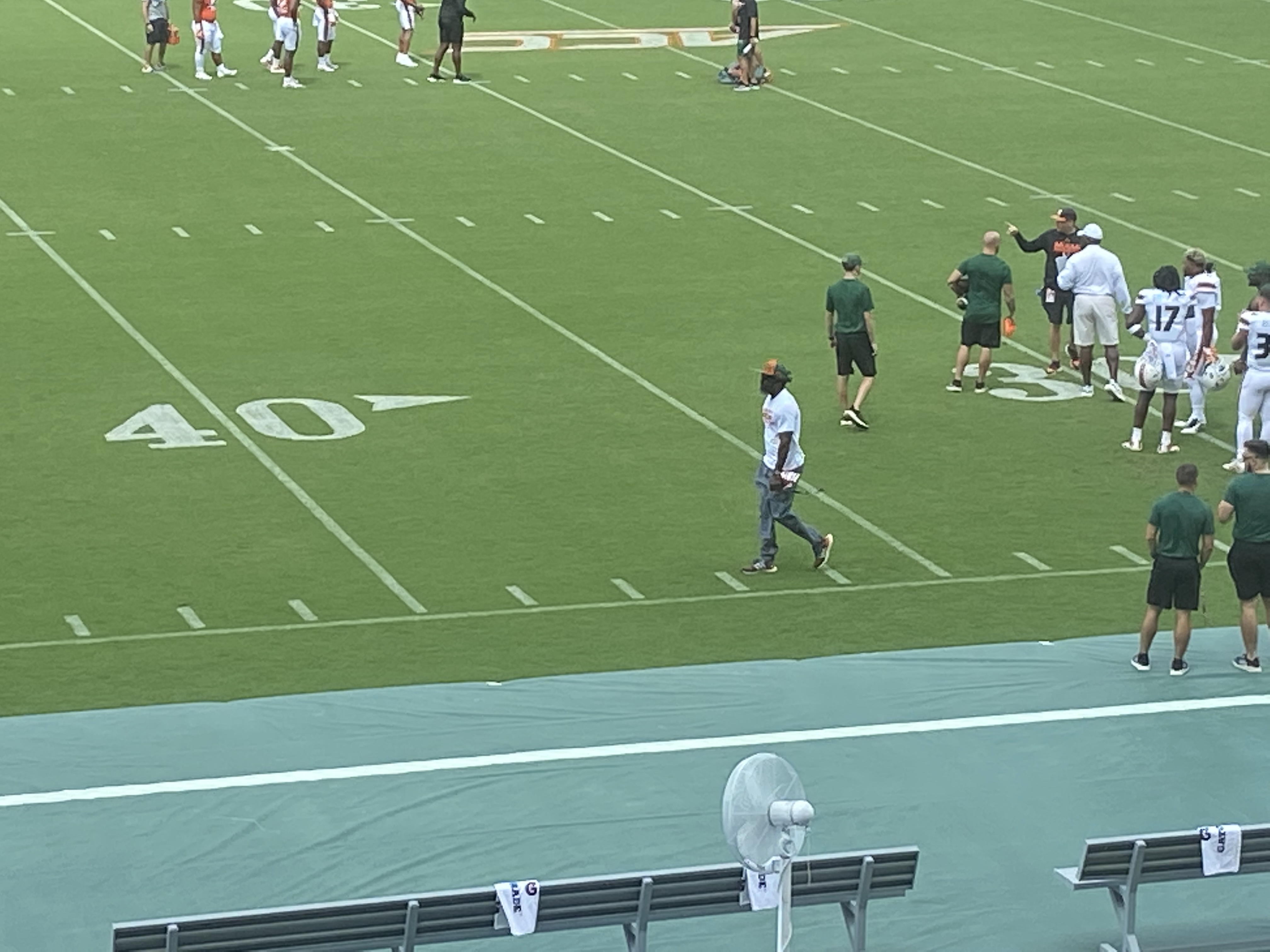 I thought Elijah looked yoked as well. Kid is carrying the weight well. Hope he heals up soon.

For the most part OP's post is accurate, perhaps a smidge too much homerism. Thad22 is a 'Balla and will get substantial playing time this year. We don't have a number 1 Receiver. The Defense won this scrimmage.

Our Defensive Backfield is for real: Avante, J.Will, Gil, Te'cory, etc. We better start paying attention to Thomas Davis, he is disruptive

Our TE's are always open. Perhaps this will be our "Go To Guys"
C

Thad's gonna have to either get faster, and/or lose some weight. He got tripped up on a couple of runs where He had daylight, including one where He had a TD. Agree with the OP on His inside running though.

Swampcity said:
For the most part OP's post is accurate, perhaps a smidge too much homerism. Thad22 is a 'Balla and will get substantial playing time this year. We don't have a number 1 Receiver. The Defense won this scrimmage.

Our Defensive Backfield is for real: Avante, J.Will, Gil, Te'cory, etc. We better start paying attention to Thomas Davis, he is disruptive

Our TE's are always open. Perhaps this will be our "Go To Guys"
Click to expand...

Preciate the comment, I’m a naturally optimistic person so I tend to see the good first before I notice the bad and shįt that needs to be cleaned up. We certainly have a long way to go on the defense from a talent and playing perspective, but that backfield will set the tone for sure.

Nice write up! Please don't tell folks it's long anymore. There are plenty of desperado’s around here that need to put more time into reading.

South Side Chi Cane said:
Nice write up! Please don't tell folks it's long anymore. There are plenty of desperado’s around here that need to put more time into reading.
Click to expand...

Lol, I’ve never understood why you need to warn people about your post being long. Like it’s that much of an inconvenience to click on it then decide not to read because it’s too long? That’s some snowflake sh*t.

kryptonite said:
Lol, I’ve never understood why you need to warn people about your post being long. Like it’s that much of an inconvenience to click on it then decide not to read because it’s too long? That’s some snowflake sh*t.
Click to expand...

I think y’all are reading too much into it lol. More of a disclaimer out of convenience if nothing else. I’m well-read, but that doesn’t mean I’m gonna take the time to analyze any and every dissertation posted by any poster here lol. I pay attention if it’s those who have something valuable to add like Liberty, Cribby, Rell etc.

Wasn’t too long so no worries there mate. I like the positive thoughts on the Spring game today. Certainly we’re highs and some lows, but overall the physicality will certainly be evident in this team come September. Luckily we have two essentially warm-up games out of the gate before A&M on 9/17. I think once we add all of the players who were out for the SG plus the incoming frosh that we’ll have more firepower on defense. That, and some key portal additions then the sky’s the limit for us in 2022.
Share:
Facebook Twitter Reddit Pinterest Tumblr WhatsApp Email Share Link
Top