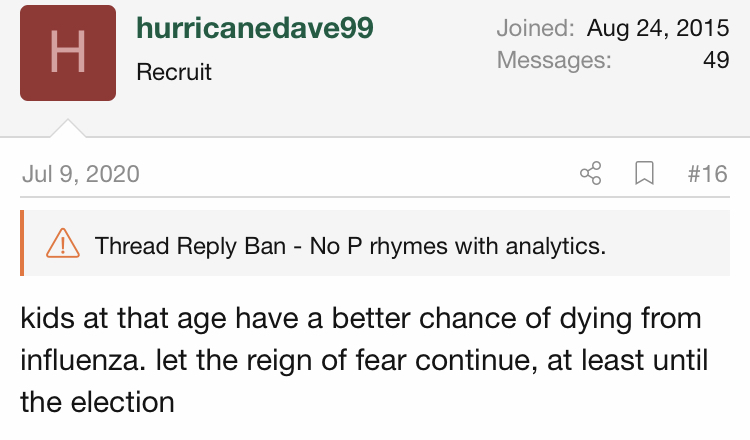 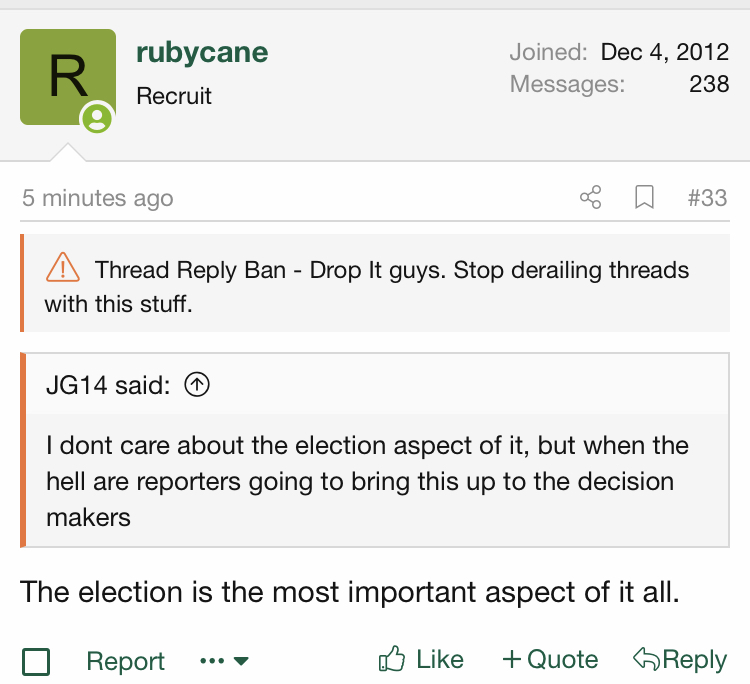 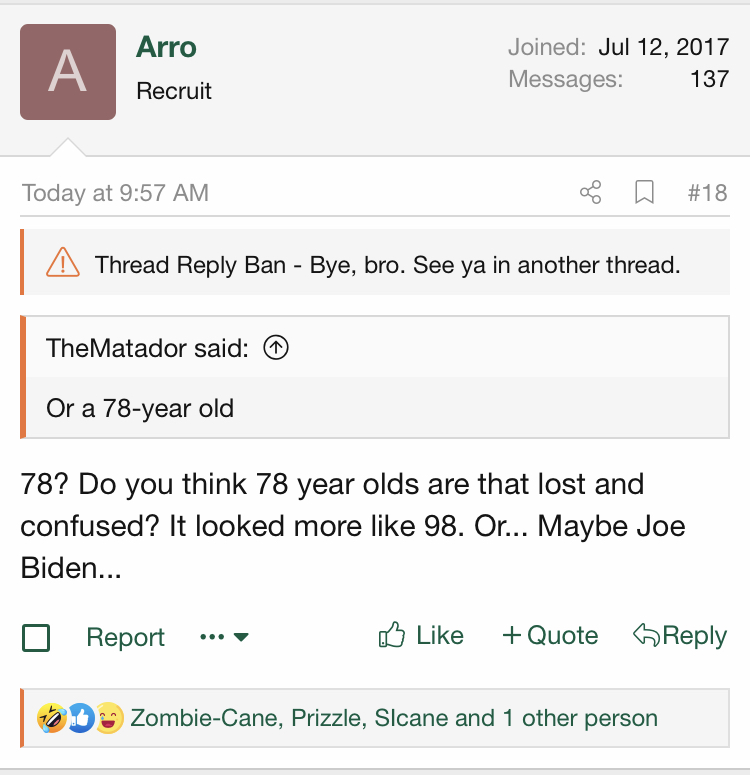 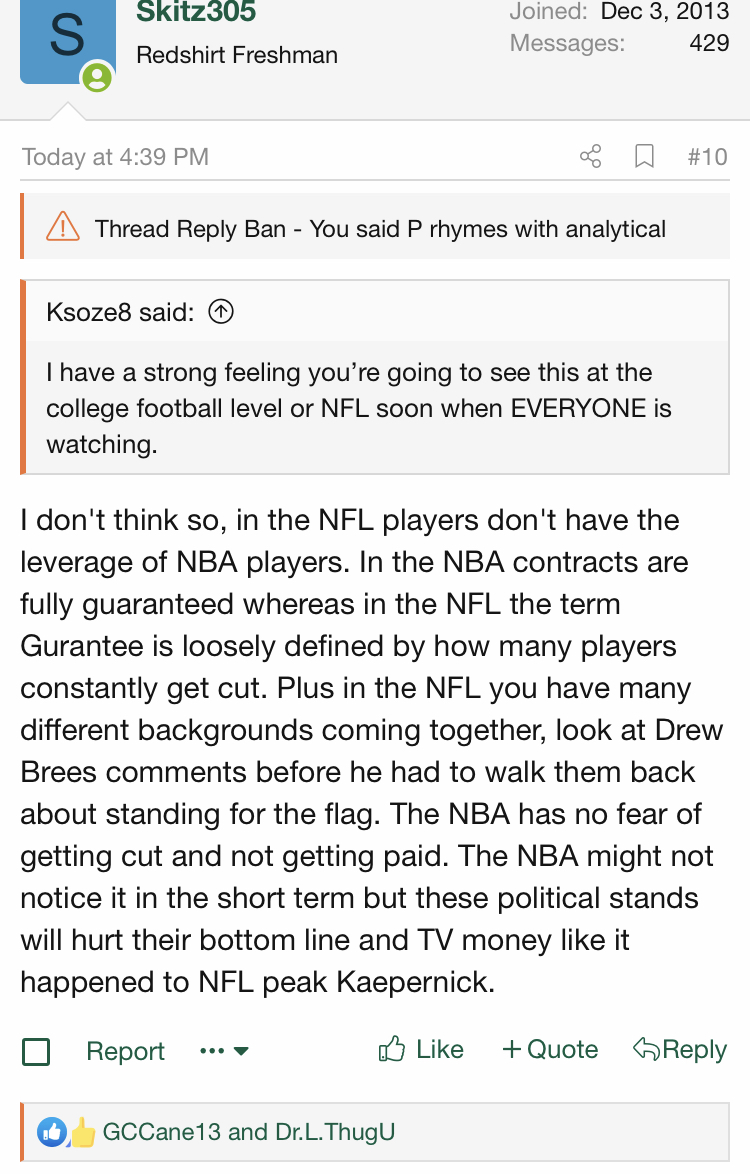 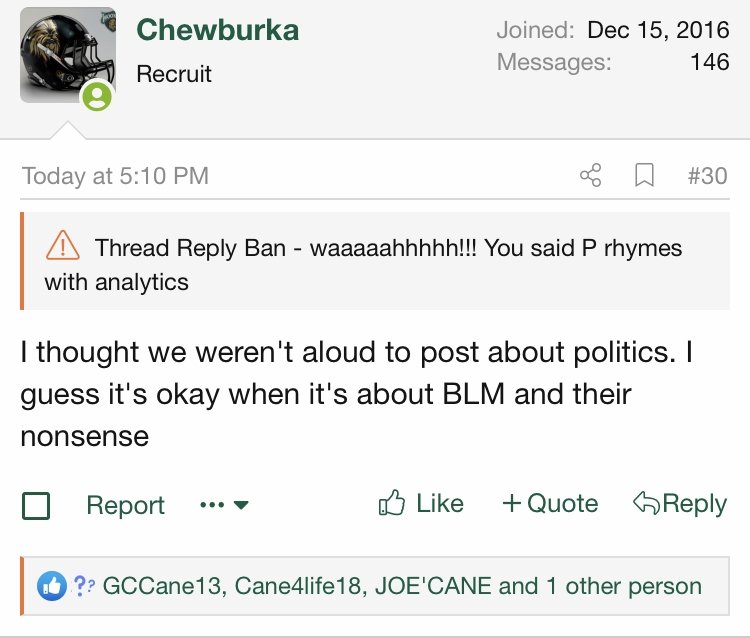 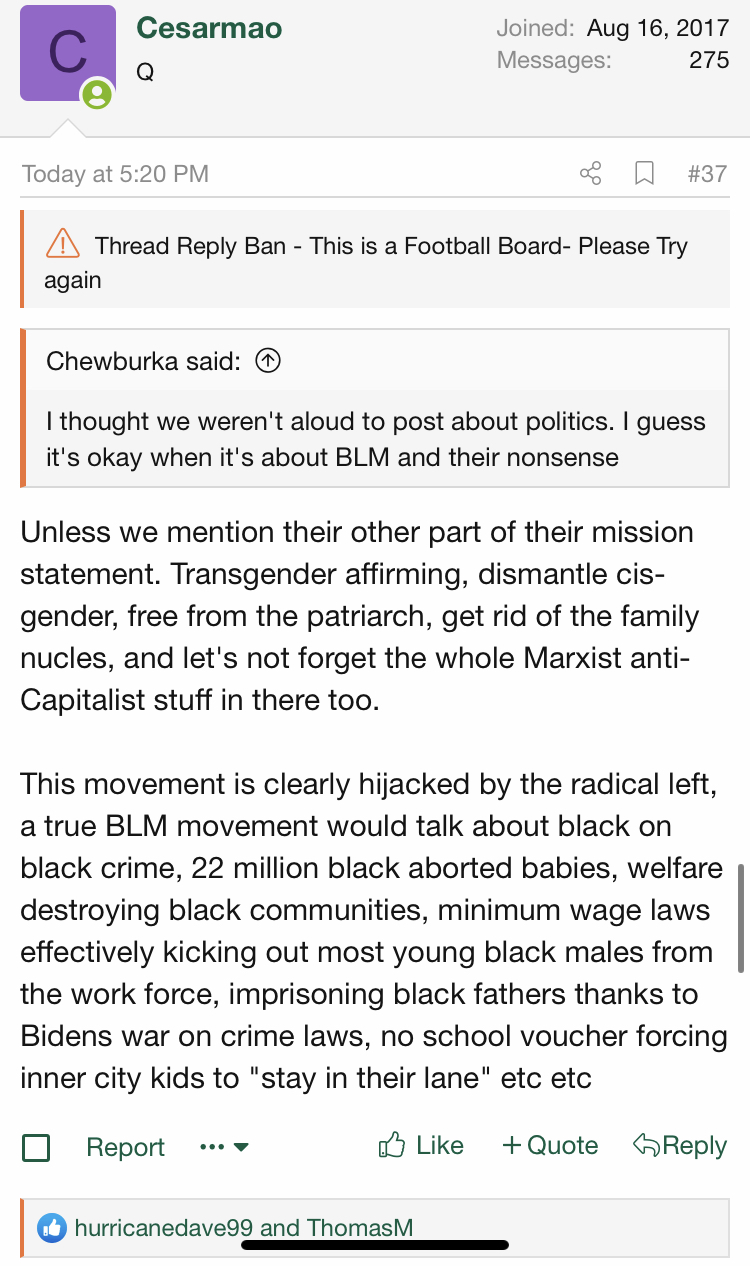 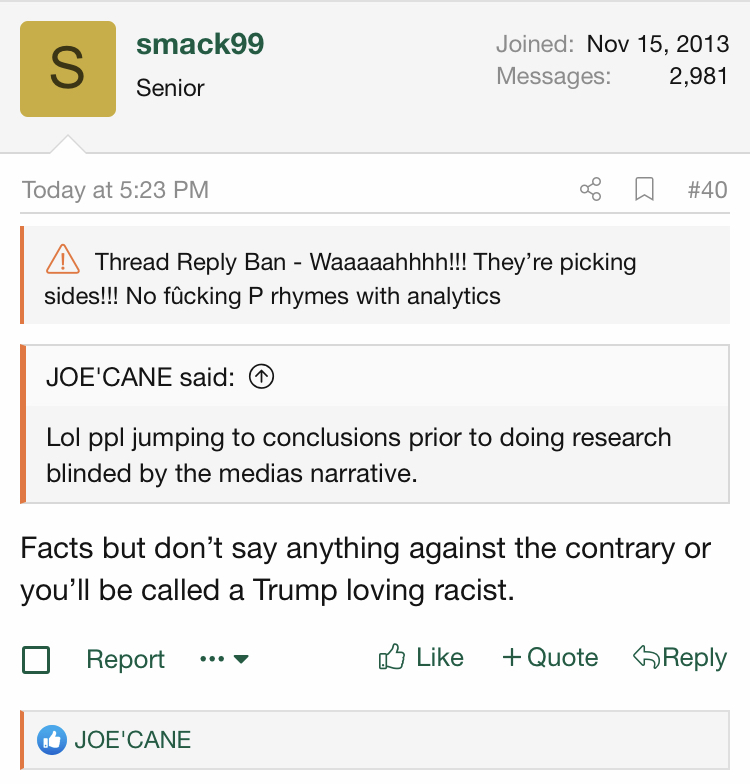 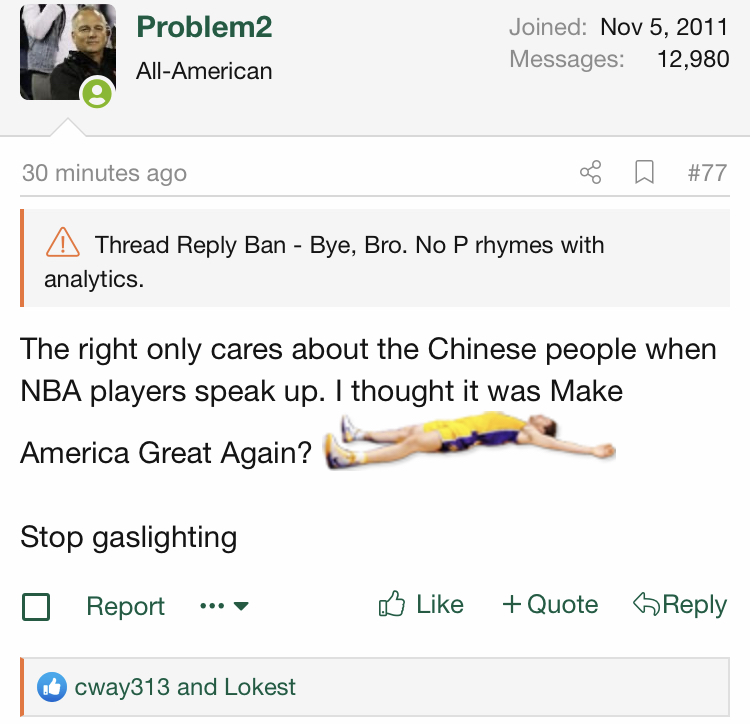 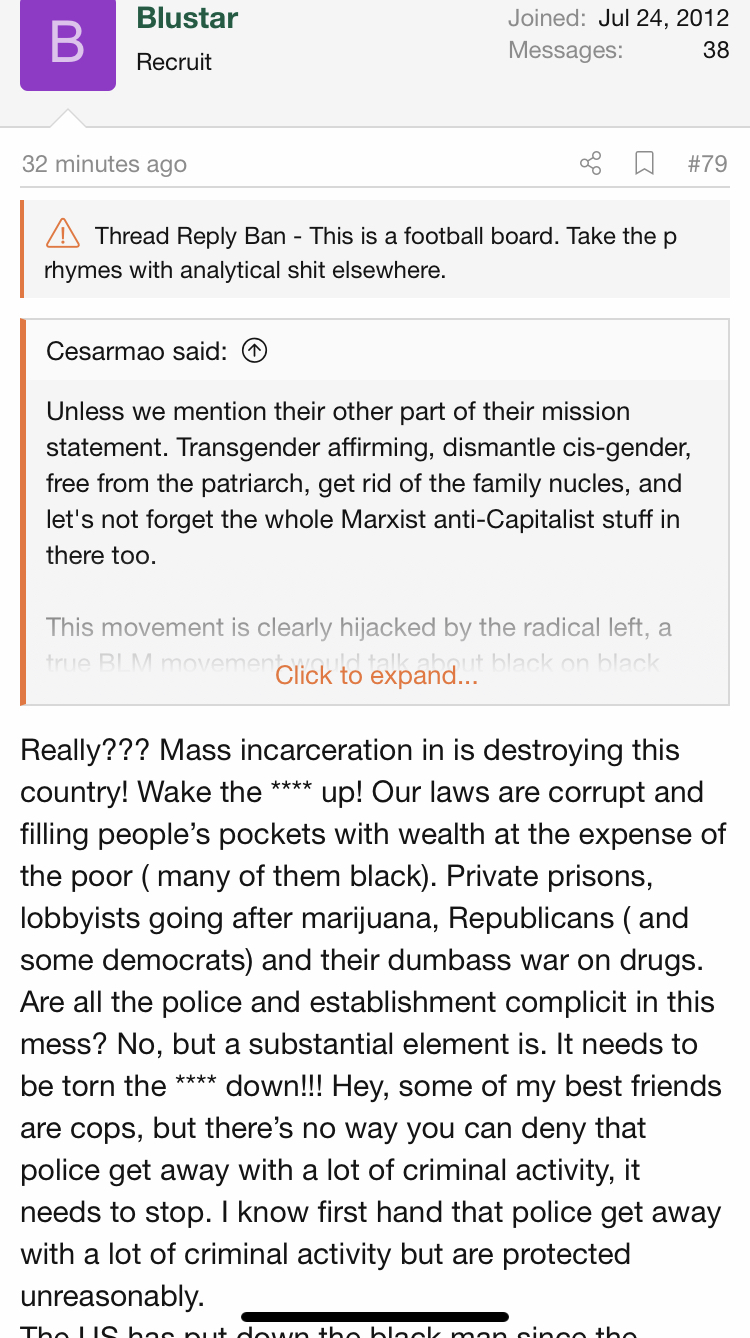 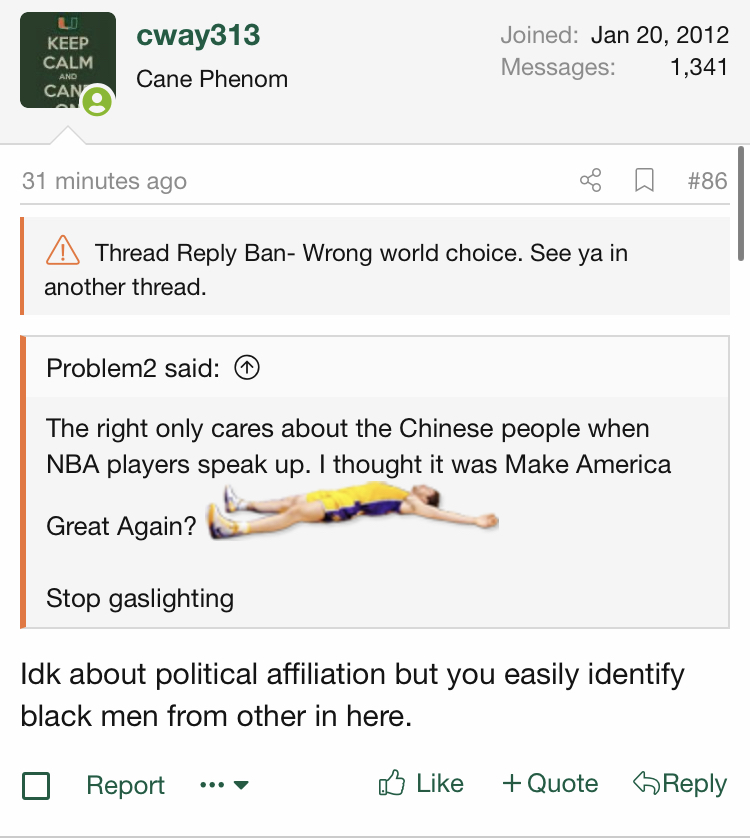 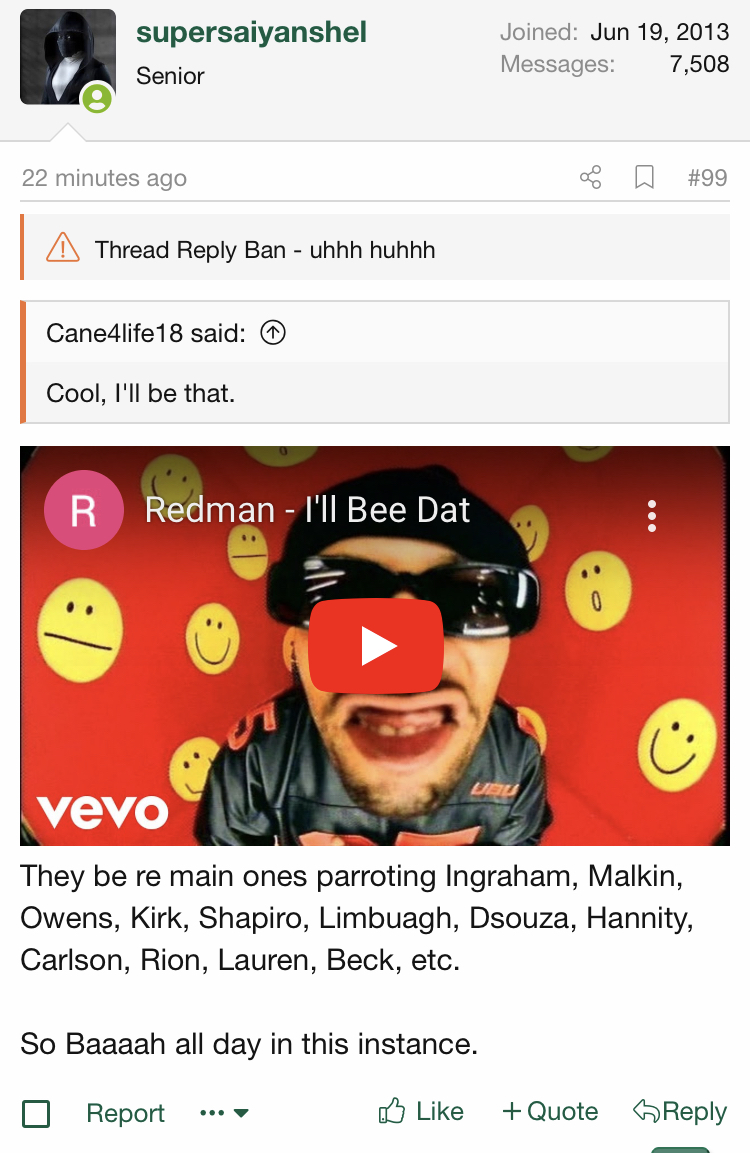 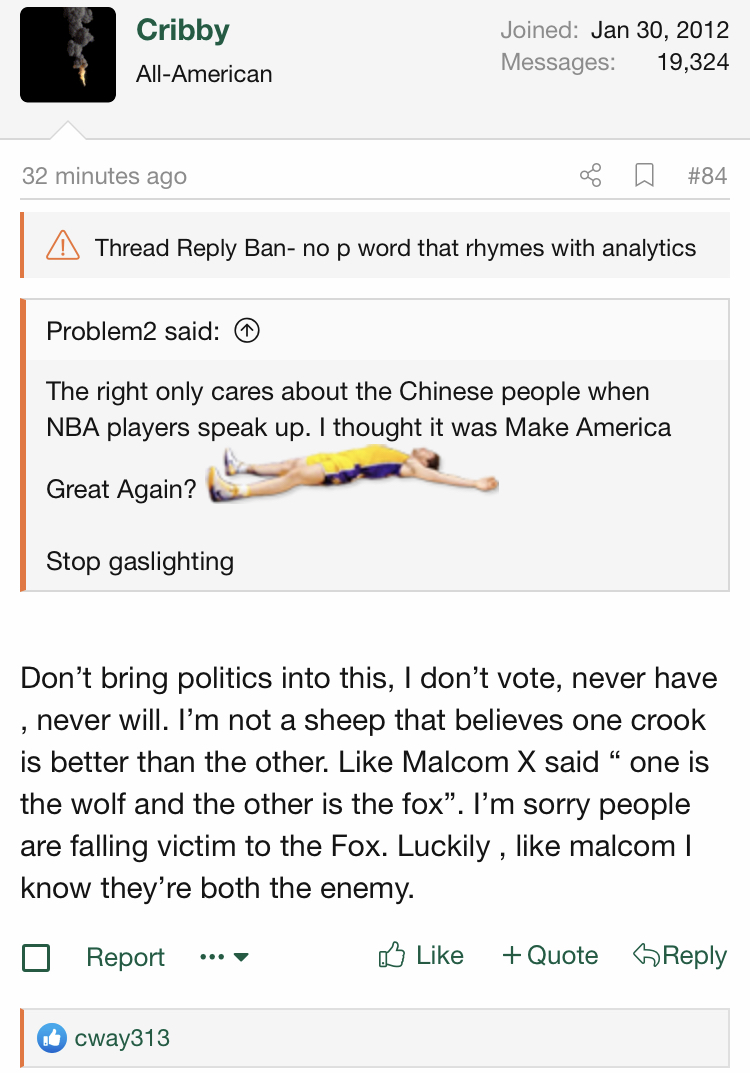 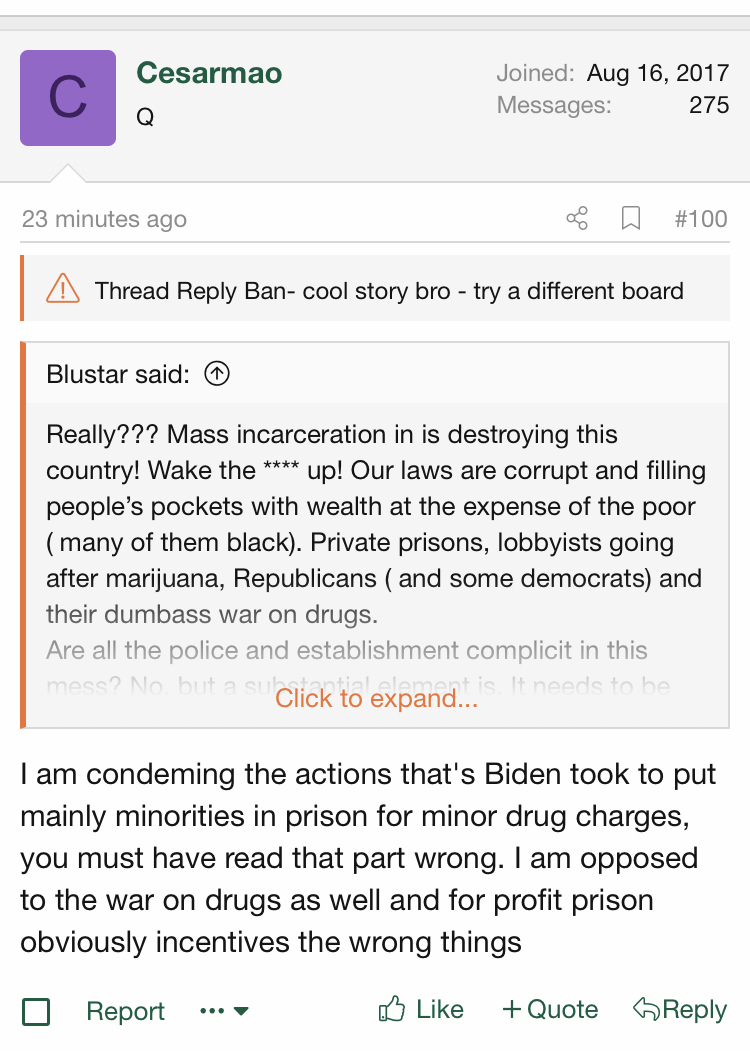 11 reply bans for p rhymes with analytical **** plus the thread is going down a bad path anyhow as to race. Regardless of what happened, those things never go well here so that thread will probably get locked shortly. 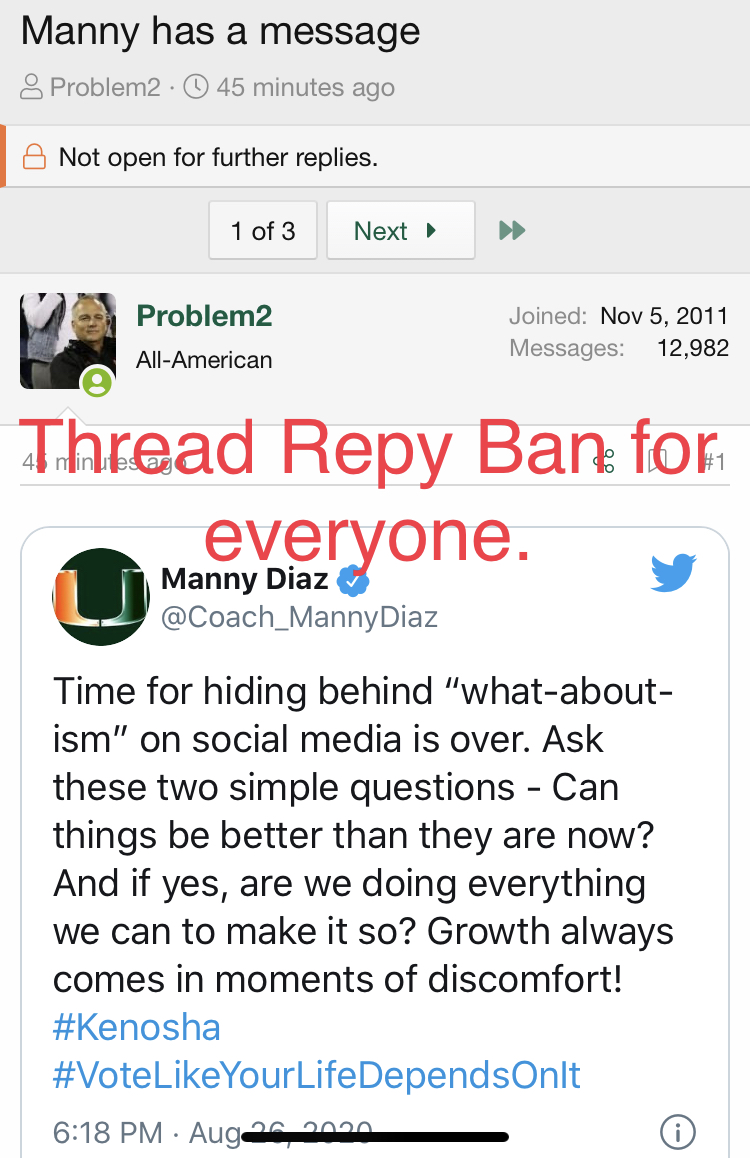 I’m about to start randomly assassinating repeat offenders with full board bans. People just get banned in one worthless thread and then do the same **** in another meaningless one.

I’m bored and I know most of you are too. Should we be like Emeril and kick it up a notch? Make the stakes higher for the serial p rhymes with analytical thread wreckers of threads in Eye in the Sky and the Recruiting Boards?

A day, a week, a month, permanent??? I don’t know. My guys @Mklein13 and @gooner44 got perma-banned for serial thread wrecking. I don’t know what @Andrew will allow but I do know that most of you think that the 2 main boards have been way better with the crackdown on P rhymes with analytical ****... so as Reggie Hammond would say - “Let’s see what we can **** with next?”

Oh... and FYI - if you start racial shît on here, I’ll just end your stay on here period. IDGAF

And just like that, we’ll start with P rhymes with Analytical Repeat Offender - 48 hour board bans.

And no you don’t have a fucking right to continue ruining the Eye in the Sky and Recruiting boards here. This is a Canes football board. Take it somewhere else. 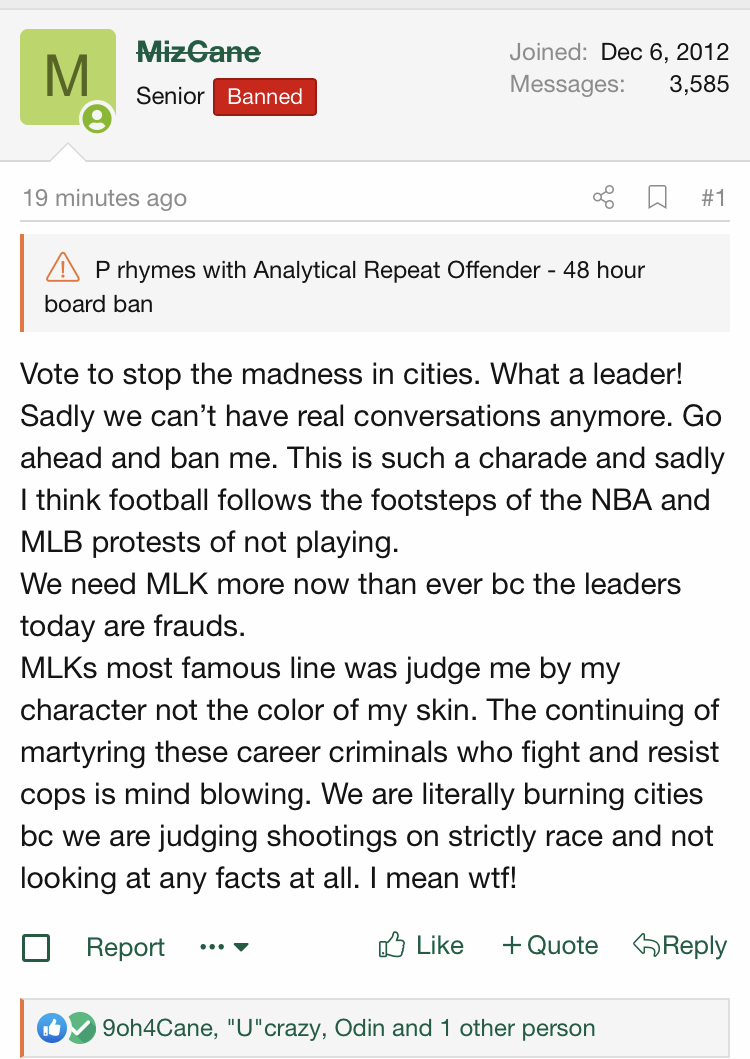 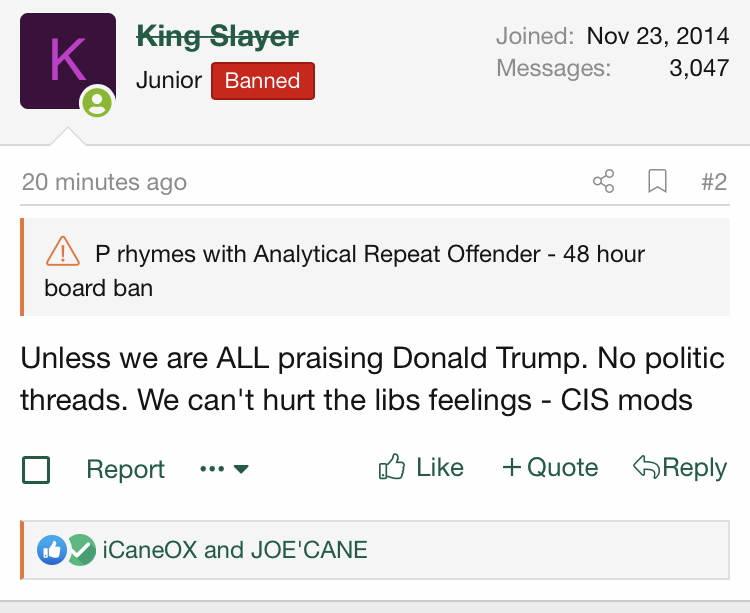 I guess I missed this thread before it was deleted... 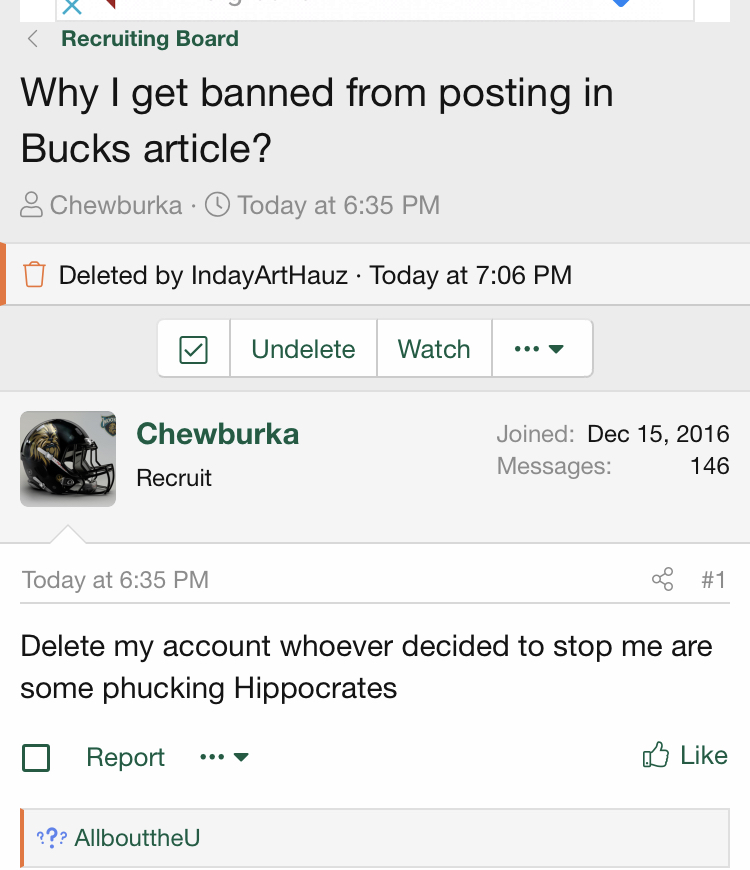 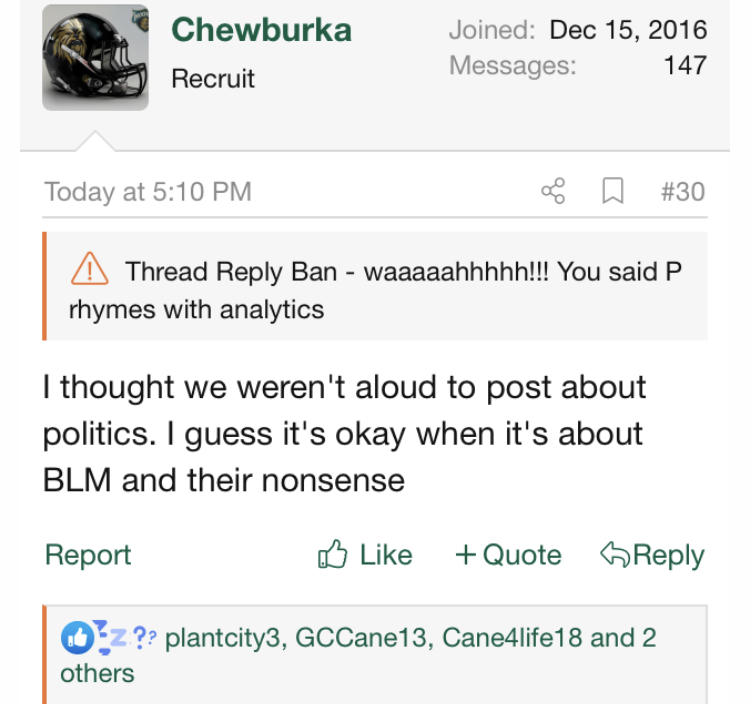 Unreal. Less than 150 poRsts and he’s mad because he can’t freely spew his P rhymes with analytical bullshit on our Eye in the Sky and Recruiting boards? And he starts a call out thread?

Per your request, @Chewburka, I am copying @Andrew so that he can delete your account. In the meantime, I’m just gonna ban you because I’m not interested in your insults or seeing any more of your ****. 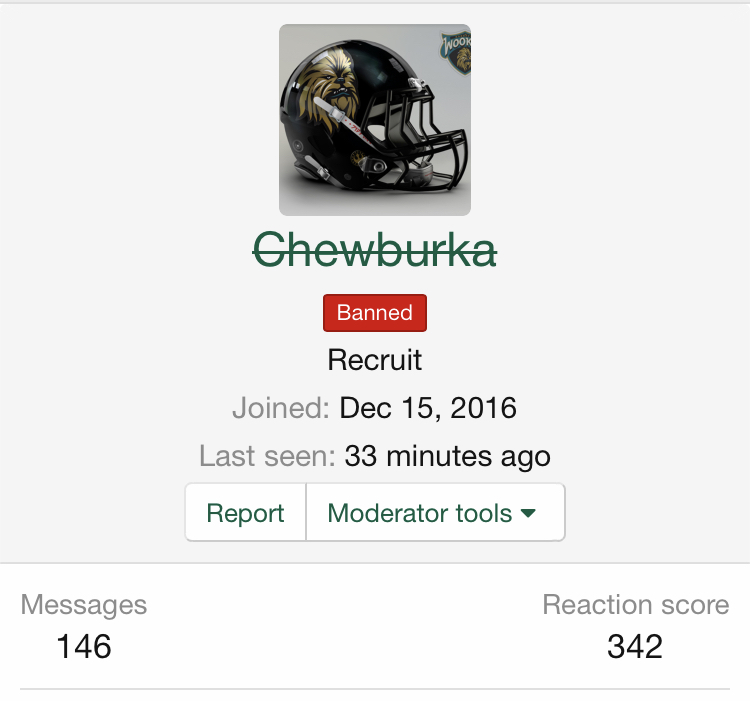 For the vast majority of those who want this crap off the 2 main boards because you’re here for Canes stuff, I’m trying...

Even though the poster is responding to a totally asinine comment, don’t go p rhymes with analytical... 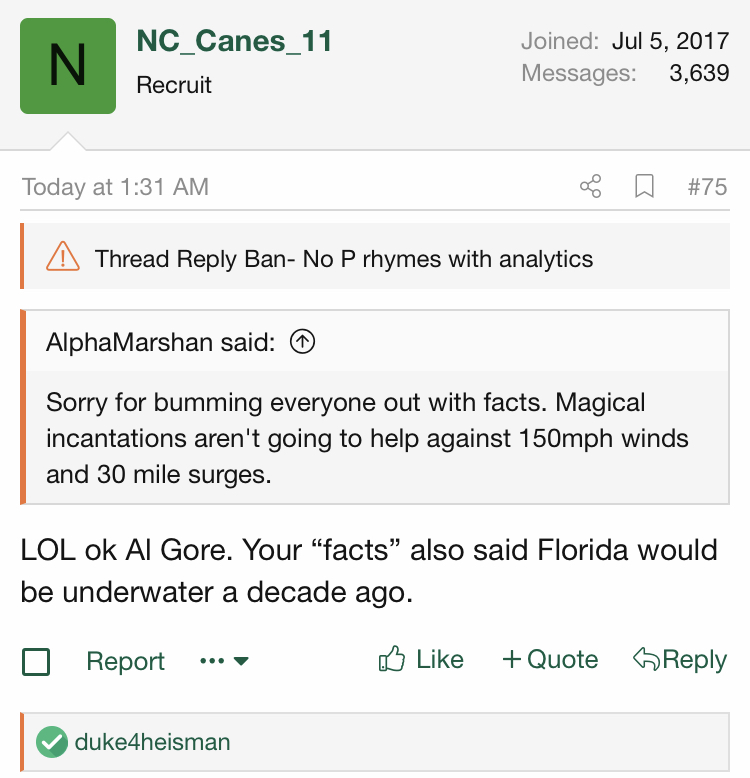 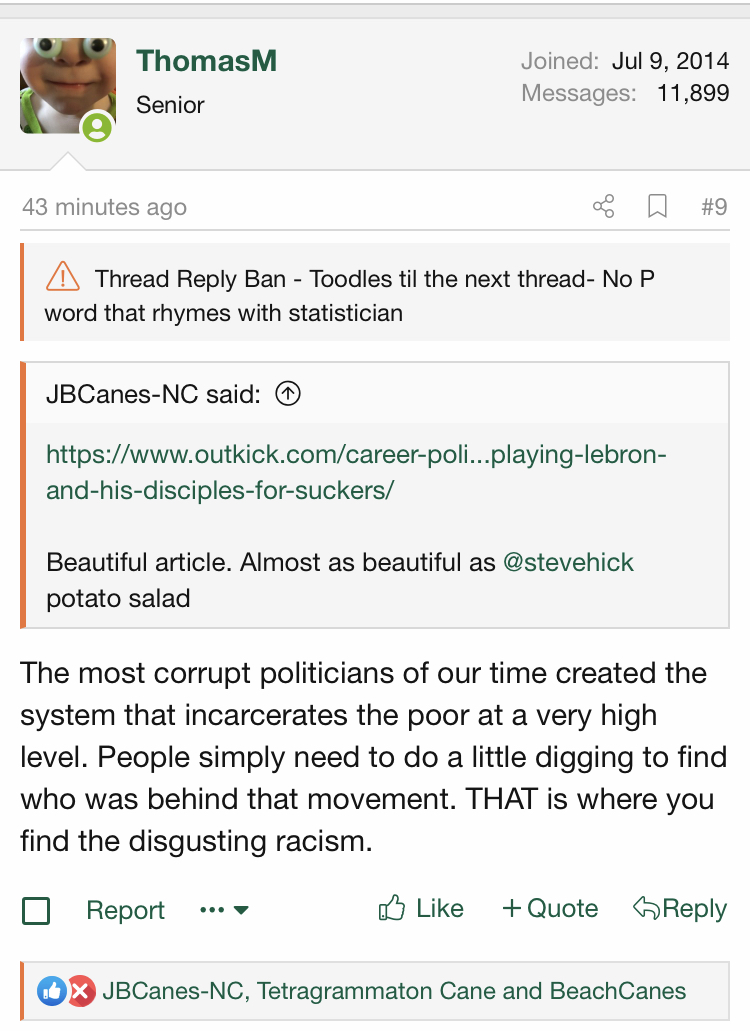 I’m sorry for those who get upset with reply bans but at the same time, I’m also not sorry. This isn’t a free-for-all open ended democracy. It isn’t a free for all for people to go into their own views of things in divisive areas which derails threads and divides posters in paralyzing ways and makes this place something other than what we should reasonably expect.

We’re here to talk Canes which brings us together. Please keep the Eye in the Sky and Recruiting boards clean of this type of thing. 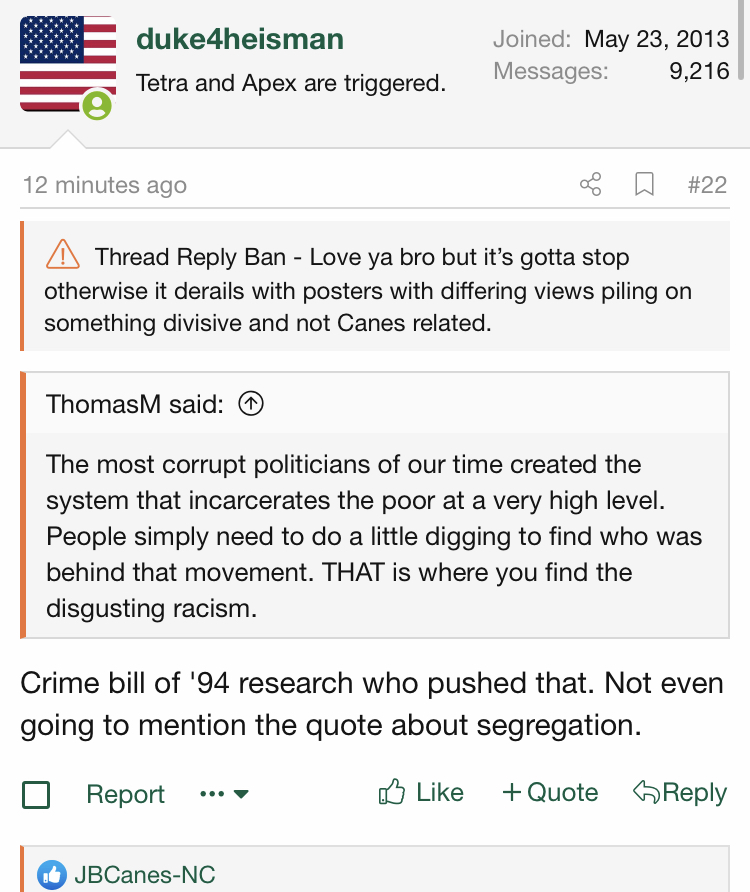 Great news! Due to their immaculately exemplary behavior (they were on short term bans so they couldn’t do otherwise), the 48 hour bans of @MizCane and @King Slayer have been commuted by me to the less than 24 hours served and they have been reinstated in full.

It’s come to my attention via a wise poster that I need to thread ban and delete posts as best I can to stop the continued comments. I’ll still ban the people replying but I’m going to try to delete posts to nip the derails. You may not see the screenshots in here but rest-assured that the work continues.

And serial problem starters will still be subject to greater penalties but hopefully this curtails more of the domino effects. 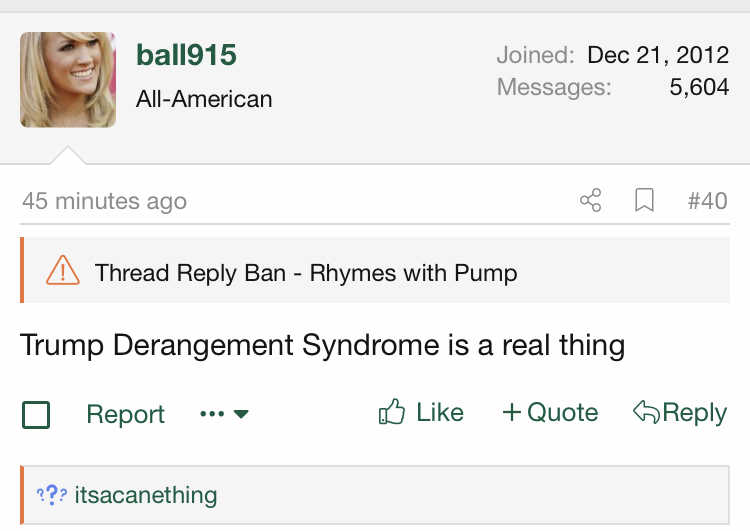 I have now started to invisibly thread reply ban users and delete their posts without public warnings posted. That is the direction I’m going in right now in order to stem some of the domino effect. I will ease up on someone responding to stop posting politics as long as it’s bipartisan and helpful and stop with that ban. If the board can’t handle it then I’ll go back to banning everything that moves.

Like 8 said, you might not see the reply bans in threads any more but rest assured that they continue for violators. I’m just deleting the posts to nip derails in the bud. 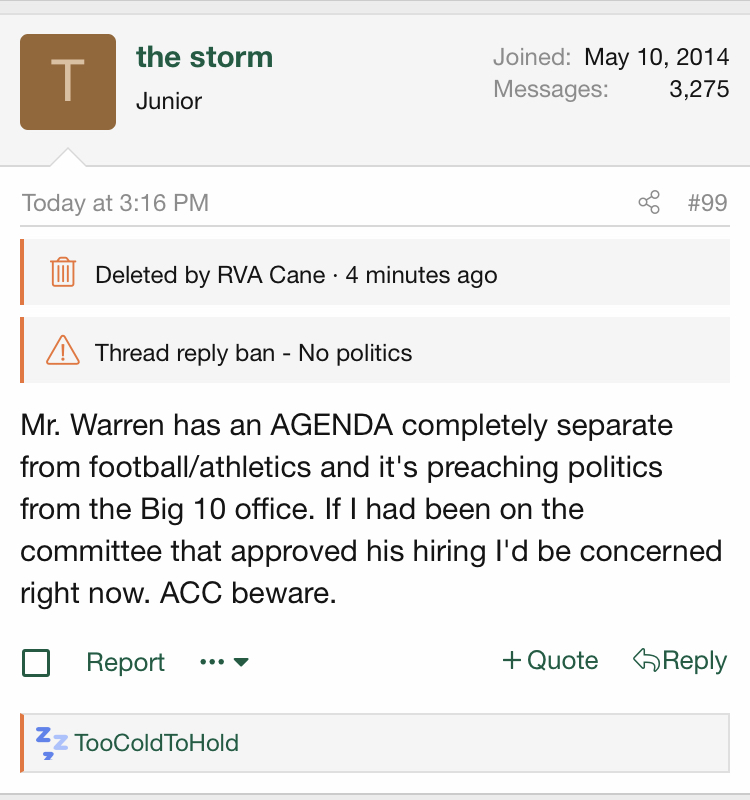 I have no issue giving out 24-48 hour board bans to repeat offenders either. If I’m going to have to repeatedly delete the same **** from the same posters then the thread bans aren’t enough for them obviously. And they can complain all they want. No one will save them from me escalating it in measured steps. When that happens I’ll post them here.

Stop fûcking up our Board! Leave p rhymes with analytical, race baiting/bigotry and other Mongoloid behavior out of Eye in the Sky and the Recruiting boards.

And now we break for a brief message from one of our sponsors...

The work continues. The bans continue. The posts disappear. 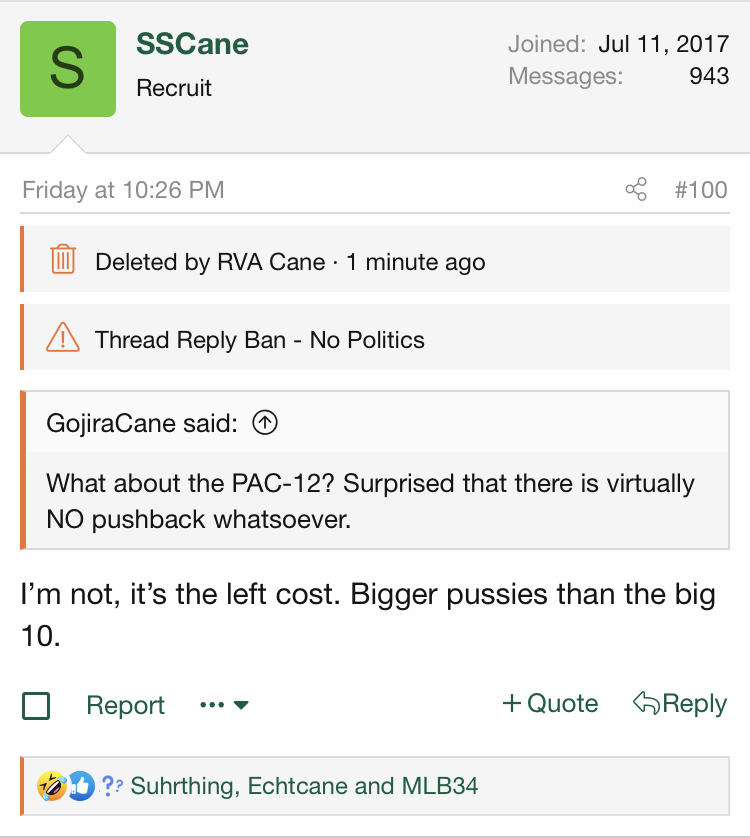