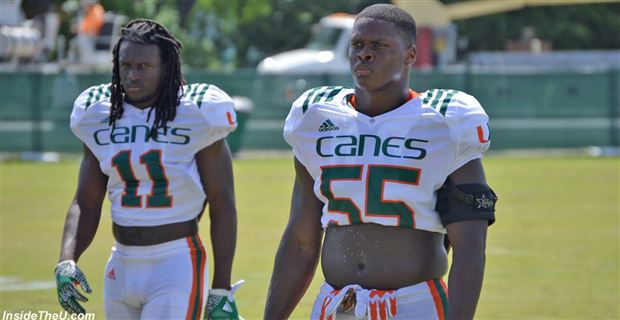 Defensive coordinator Manny Diaz is pleased with the leadership that has emerged on the defense going into the 2017 season.


Diaz told The Joe Rose Show on 560 WQAM that there is leadership on every level of the defense.


“One difference we are seeing from a year ago is that last year anything that had to be corrected had to come from us,” Diaz said. “Now, we are on the way out to make a correction and the player is already on the way to do it. The pack mentality is already taking over. The pack is starting to correct the pack. That is something you have to have to really be great.


In the secondary, Miami is led by junior safety Jaquan Johnson.


“We are getting great leadership from Jaquan Johnson,” Diaz said. “He has become the veteran back there and he has done a great job of leading the guys.”


Sophomore linebacker Shaquille Quarterman has also grown into being more of a vocal leader for the entire defense in his second season.


“You can see the transformation,” Diaz said. “He has had the respect of the locker room since he has been here, but you can tell now that his ability to grab the microphone and get in front of some guys and challenge some guys is really changing.”


Diaz mentioned senior Chad Thomas as the player on the defense line who has done a nice job of being more of a leader.
Advertisement
D

Everyone is excited about the starting DTs, Joe Jackson, and the freshmen ends, but I think Chad Thomas is going to have a real nice season.

Just when I think I should temper my expectations a bit I read articles like this one that make me want to say we are going to the playoffs.
I can't wait to see our defense dominate.
J

HOLY $HIT IS THAT DEANDRE WILDER???? In just 3 months Felder has that guy looking like he is ready to contribute now! Wow! No redshirting that guy.

Glad to see the Defense is stepping its leadership up. Hopefully gone are the days when we dont have natural vocal leaders and not guys who want to "lead by example" or fake tough guy leaders who only did it when the cameras were on. Sounds like we will have accountability on D across the board.
T

An important piece left out of Mannys interview when asked about the freshman overall.

He said the probably the biggest dramatic change from last year to this year is the juice we have added on offense. Said the speed compared to last year since bring in the young guys has been a big change.

My thoughts. Last year we finally looked like Miami on D. This year you add in the fire power on O and we have something dangerous!

Wilder has been eating!