2022 Carrollwood Day (FL) DT Brandon Cleveland made a Friday night commitment to the Miami Hurricanes over the weekend.


The 6-3 260 pounder is considered a consensus 4-star prospect by the rankings industry. According to the 247Composite, Cleveland is the #175 overall player in the country, the #13 DT nationally, and the #20 player in the Sunshine State. The commitment moves Miami’s 2022 class up to #14 in the team rankings according to 247Sports and #26 on Rivals.

Cleveland began getting Power 5 attention after a strong sophomore season at Seffner Christian Academy in 2019; he would later transfer to Carrollwood Day over the offseason ahead of his junior year in 2020. The Canes were his first Power 5 offer back in late January, and used that head start to develop a relationship with Cleveland, who made clear from the beginning he was looking to make an early decision. After Miami landed in his top 7 group last month, Cleveland stuck by his original commitment timeline by committing to UM sight unseen before the start of his junior year. He ultimately chose Miami over offers from FSU, Penn State, Auburn, and South Carolina among others.

On film, Cleveland flashes qualities of a versatile and disruptive pass-rusher that can be lined up all along a defensive front. Massive frame for a rising junior that is only going to grow. A prototype 3-tech at the next level, but can be seen playing some 5-tech, and shows he is comfortable standing up and rushing in off the edge. Impressive swim move and quick feet to get around offensive linemen, paired with a great initial punch to go through his opponent and get them off balance to shut things down in the backfield. At his size of 6-3 260 pounds, there aren’t many guys that have the athleticism to sink back into the middle of the field and effectively spy the QB in space, but that is exactly what Cleveland has the ability to do, and shows range in doing so to contain the edge in limiting big plays. Devastating hitter if he gets a runway. Not just a pass rusher, though; displays he has enough power and strength to mix it up on the inside as a run stopper, using his strong hands and upper body to move interior OL and demolish RB’s. High motor prospect that is relentless in pursuit and doesn’t give up on plays.

As a sophomore in 2019, Cleveland was highly productive and put up a monster stat line of 76 tackles, 18 TFL, 9.5 sacks, 2 FR and a blocked punt for a Crusaders team that fell to Champagnat Catholic in the 2A semifinals.

Cleveland is the second commitment on board for the 2022 class, following up Chaminade-Madonna (FL) 3-star DE Jamaal Johnson’s pledge to UM two weeks back. At this juncture, it would be pointless to try and discern the number of defensive tackles Miami might take in 2022 with the 2021 class yet to be completed, but it is a strong year for in-state talent when looking at the position nonetheless.

In terms of in-state guys, the top two targets on the board are a pair of 5-star talents in Lakeland’s Gabriel Dindy and IMG Academy’s Tyler Booker. Of course, the Florida Gators have a strong track record at Lakeland, but Dindy currently cites Florida State, Oklahoma, and USF as those that standout and are in contact with him the most, so there may be some room to maneuver if Miami feels they have a shot. Booker is the more interesting prospect to me as a guy that is originally from New Jersey; the Canes loved what they saw from him after watching him practice at DT back in January, but Booker also has top schools coming calling for him as an OT as well after getting his first action at the position in 2019. Booker told CIS in May that he has a strong connection with former teammate and current Cane freshman Michael Redding, and displayed a deep knowledge of the UM program and its history, so there is a ton of preliminary interest here. His recruitment will be an interesting one to follow as Booker says he is completely open right now.

Booker’s 4-star teammate at IMG, Nick James (also known as Dominick), has also attracted early attention from UM and told CIS in June that he sees a great fit in Miami’s defense. Being originally from Alabama, James has been a frequent visitor to Auburn in the past and the Tigers are considered an early top contender for his signature. Locally, the Canes have two offers out to rising juniors in 4-star DT Daniel Lyons from Homestead and 3-star DT Alton Tarber from Deerfield Beach. Lyons seems to be the top target for Miami in the South Florida area, as UM is in frequent contact with the athletic pass rusher; FSU and LSU are also heavily involved. Tarber is a guy that has slowly raised his recruiting profile in recent months, but has kept quiet about where things stand with him.

The defensive tackle position at Miami last season was a solid, if unspectacular, group that held the point of attack in run-support, but didn’t make many impact plays in the backfield. Still, the group has untapped potential going forward. Jonathan Ford is a returning starter at one spot that still has room to improve, and he is expected to be joined in the lineup by Nesta Silvera, whom many see as the UM DT with the most potential for a huge season after sitting out most of last year with an injury. Behind them, Jordan Miller showed flashes in very limited playing time in 2019 and looks to take another step forward in his development, while a group of freshman and redshirt freshman fight to round out the rotation. Miami also has commits in 2021 from 5-star Leonard Taylor, 4-star Savion Collins, and 3-star Allan Haye.

All of the returning players at DT have potential, but haven’t yet proven at this point that they can relied on for a full season of high-level play. I’m a big fan of versatile guys like Cleveland that can play all across the line, as they give you more options when running a defense; those are usually the guys that play early and are already physically developed enough to hold up at the college level. Not to mention, Cleveland still has another two years to put on good weight and improve his game from a technical standpoint, so we are really just seeing the tip of his potential. He offers All-ACC and NFL upside if he can hit his ceiling.

Great content per usual, Stefan! This kid is a STUD!!!

Stefan Adams how are you feeling about this one?

How’s the competition for his high school?

i like the trajectory of him and Johnson. Now finish with a big 1 tech type and we good for next year.

Stroud is a savage.

Kids looks the part big time. He’s a great pairing with Johnson. Tough to hold on to top talent at DT but if we can show out and Nesta can play up to his potential for once we can keep both these studs in our 2022 class. We really need to show up on the field. Could solidify us with 3 Top 10 classes in a row, that’s building chips across positions and developing talent to make a run at Clemson for tops in the ACC status.
C

CaneDog66 said:
Kids looks the part big time. He’s a great pairing with Johnson. Tough to hold on to top talent at DT but if we can show out and Nesta can play up to his potential for once we can keep both these studs in our 2022 class. We really need to show up on the field. Could solidify us with 3 Top 10 classes in a row, that’s building chips across positions and developing talent to make a run at Clemson for tops in the ACC status.
Click to expand...

The main thing is, it's the coach richt affect, by immediately getting us back to a 4-3 defense, it's the scheme, brought in by coach diaz, added with the strong resume that coach stroud has, some will remember and some don't know, but it was a coach stroud coached d-linemen that went #1 overall over a guy like reggie bush and rightfully so in mario edwards, you won't find to many d-line coaches that can say they had the #1 overall player selected in the draft, well coach stroud can say that, and with the way jock rousseau performed last year, stay tuned if theirs football again.

He’s probably unranked by ESPN and Rivals at this point. He might be Top 100 in the Composite once he gets those rankings.

And we should have solid chance at adding Top 100 kids at DE with all the options locally.
A

Kid having himself a day. He’s on the same team as Michael Trigg(TE) and is playing Melvin Jordan(LB). 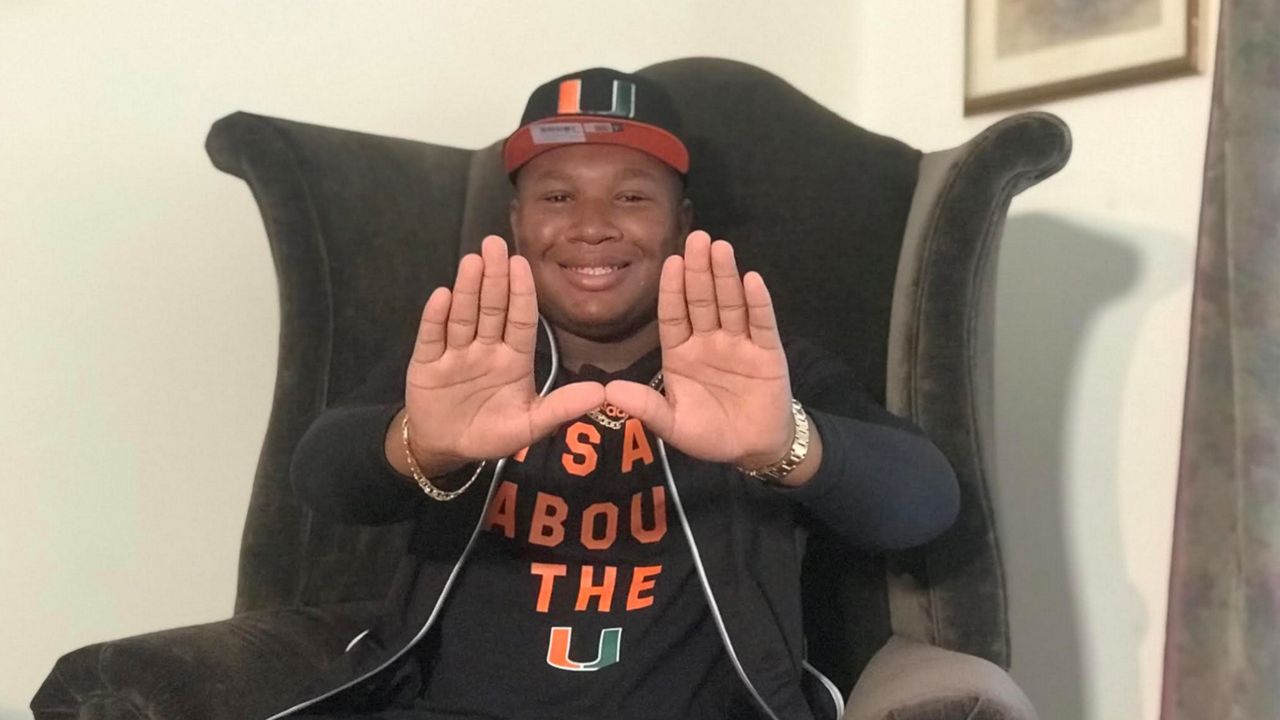 EXCLUSIVE: Behind the Decision of New Miami Commit Brandon Cleveland

Love the interview, but the bump scared me.

puertorricane said:
Love the interview, but the bump scared me.
Click to expand... 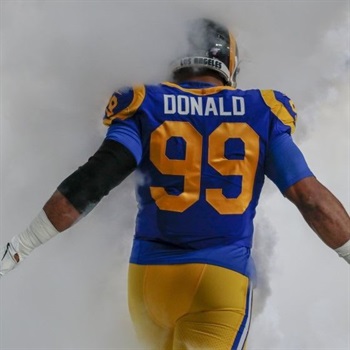 First step needs work, and a little stiff at times. Everything else looks really good. Powerful legs and arms, agile, accelerates to the ball, doesn't let the OL get their arms on him. He's a big kid who will make a great 3 tech. Reminds me of RJ and Bethel. In that video of him committing to the U, he shows a great attitude. Will be an amazing team player.
G

The biggest selling points of Miami and it has nothing to do with football.

Miami honestly has every young persons best interest at heart during there time on campus.

Kid just got offered by Nc State today.....for both football and baseball.

very interested, didn’t know he played baseball. Is he any good?

Kid has a nice first step and is relentless to the ball, be it a QB or RB. Will show the ability to play outside as a SDE and inside at the 3-tech. What’s not to love about him? Is a very nice addition to this early ‘22 class, he’s going to become a very nice player for Miami.

CaneDog66 said:
Kid has a nice first step and is relentless to the ball, be it a QB or RB. Will show the ability to play outside as a SDE and inside at the 3-tech. What’s not to love about him? Is a very nice addition to this early ‘22 class, he’s going to become a very nice player for Miami.
Click to expand...

Respectfully disagree on the first step. Agree with the rest. Though I think he's a 3-Tech all the way.

I'm picturing in my mind a Cecil Fielder meets The Birdcage scene. Kind of a beefed up Bull Durham scene.