ditto on the great shows

We'll be posting all the shows in this thread- CanesInsight Live, CanesLegacy, and Canes Breakdown.

We argue about the potential 12 team CFB playoff.

We discuss a nonsense UCF article and address the upside down U saga.

The Likens interview was more like a conversation. Relaxed, full of fun and personal things. Well done. Just a fine crafted video.

We argue about the potential 12 team CFB playoff.
Click to expand...

Talking about a potential larger tournament is my kryptonite.

I think that 12-16 is far too large a number, and yet 4 is far too small per the reasons demonstrated in the video. The regular season isn't necessarily devaluated because each fan base's primary motivation is for their own team to win, and not the overall landscape of the game. The same applies all across sports. Watching great games isn't something that's set in stone. It either happens, or it doesn't.

It's possible for a great team to lose their QB at the beginning of the season and lose 2-3 games, only for the QB to return and ream their conference then on. At the same time, I don't want a chance for a UAB to enter the tournament. There's no good for a major program. Win, you beat a cherry. Lose, your entire program can sink from public perception. 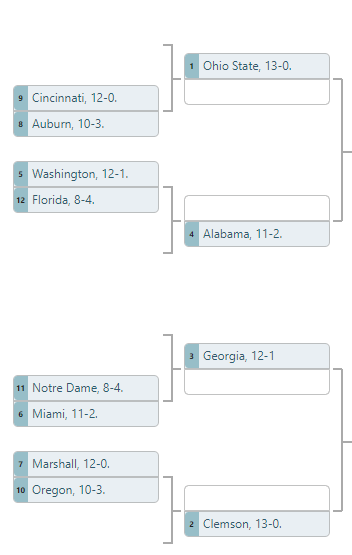 * Something like this would see Notre Dame enter at 11, because of the money they make and overall publicity. They do not deserve to be there, but they would be. In this scenario, I have no doubt UM would win.

* Worse still is a Washington team from a Power 5 conference taking on a 4 loss Gator team. The only reason they're there is $EC. There is a large chance Washington could have a bad half and lose the game to a fluke. In that case, Alabama would wax the gators by at least 3 TD's. It's not compelling TV in general, and most of the country who don't hail the SEC would be irked. Including me.

* Undefeated Marshall and Cincinnati do deserve to be there. Marshall beats Oregon in round 1. It wouldn't hurt Oregon in the long run because an undefeated team beat them. * Round 2, Marshall v. Clemson. Marshall maxed out on every opportunity and the record is spotless. For much of the country, they're not aware of what they can really do. That's compelling. A big program like Clemson facing another undefeated team. Even a close half would make add to the overall value of the tournament. And a Cinderella team would be national news in the event of a Marshall victory.

* Cincinnati isn't facing a 4 loss team, but they are facing a 3 loss SEC team who played a tough schedule, and came very close to knocking off #1 and #2 in the regular season. They'd lose, but they have more of an opportunity to win against Auburn than Marshall > Oregon. Say they win. * Cincinnati v. the #1 team in the country, Ohio State. Regardless of outcome, it would be a another knockout experience.

I vote 10 max.
- It allows the undefeated surprises to demonstrate their worth.
- It gives the top 2 a chance to rest. Even if their budget is higher than other schools, they did win all of their games and the conference title.
- Alabama, a 2 loss team, doesn't get rewarded with a week's rest. Neither does Georgia, who has one loss.

I picked Marshall because 1/4 years they have a team that can go undefeated. They've had high-profile NFL players like Chad Pennington, Randy Moss, Byron Leftwich, Troy Brown, and Ahmad Bradshaw. I'm from WV (as a Canes fan). The Herd isn't an obnoxious couch burning sensation like the WVU fanbase. It's a place hit hard by drugs near a major university. It also, in this instance, has the ability to heal a city (as in Miami's history w/ Howard S.). Another great story.

Note: I forgot the Big 12 because they confuse me. One can sub out Oregon for a Big 12 champ and the logic holds.

We discuss WR recruiting (from Saturday)

We discuss Justice’s philosophy when it comes to OL recruiting.