2022 4-star OT Trent Ramsey has 12 early FBS offers, with 9 of them being of the Power 5 variety, and, on mid-April, the East Lake (FL) star received an in-state bid from the Miami Hurricanes after talking to the UM staff.

“Being able to talk with coach (Todd) Stroud and coach (Garin) Justice, and being able to hear what Miami has to offer, it was just very exciting,” Ramsey said. “It’s an up and coming program. They’re reestablishing who they are to rebuild the program and make it great.”

The 6’5” 270 pound athletic tackle has primarily worked at right tackle during his career, and Justice sees him sticking on the edge at the next level as well.

“I’ll play wherever they need me, but they are recruiting me as a tackle and that’s where I’ve played my whole life,” Ramsey said of Miami. “I look forward to getting down to Miami and seeing the campus and meeting the coaches in person.”

Ramsey is originally from Arizona, and he spent his freshman and sophomore year playing for Higley High School under head coach Eddy Zubey and blocking for two Power 5 level quarterbacks (Spencer Brasch and Kai Millner). After moving to the Tampa area over the Christmas holiday break, Ramsey says he has taken to living in Florida quite well and wouldn’t mind staying in the state for college to be closer to family.

“My uncle, he lives in Orlando, so we’ve done the whole Disney/Universal trip in the past before I moved here, but now that I’m here, Florida has been treating me great,” Ramsey said. “It’s like moving to paradise – I go out on the boat on the weekends and get some fishing in.

“I would say location is important in picking a school. I’ve been all over the country, so I don’t really favor one part over the other, but staying close to my family, I think that’s important.”

Ramsey is relatively new to the recruiting process, as he held just one offer heading into his sophomore season in 2019. It wasn’t until this spring that the scholarship offers started coming in when his sophomore tape started circulating, with half of his bids coming while in quarantine, so Ramsey still feels he has a lot to learn about all of his new options.

“I’m still very young and it’s still very early for me, I’m just starting to familiarize myself with all of these different colleges and coaches, really just starting to build relationships and build a connection,” Ramsey said “Not one of them sticks out above the rest right now, I want to visit some schools first. Being so young still, I want to see things with my own eyes and feel things out, familiarize myself with the facilities, all of that.”

Ramsey also spoke about his improvement as a sophomore and why he thinks all these new schools are beginning to take interest in him.

“Last year, it felt really good compared to my freshman year. I felt like I had a lot more control of the players in front of me, I could handle things a lot more being a sophomore on varsity,” Ramsey said. “I was driving people down the line. I think going into this junior season, I’ll dominate on the O-Line. Back at Higley, I worked with Jason Harris and Ty Robinson, both All-American 4-stars, and iron sharpens iron. They helped prepare me I think.

“My first mindset is, when the ball is out and the guy is in front of me, it’s time to destroy. My play style, I like to explode out of my stance and just smack them right there.”

With a plan to decide sometime following his junior year, and with campuses across the country locked down, Ramsey says he is making the most of the extra free time to make the 2020 season his best yet.

“We actually have a small home gym here, so I’ve been getting in my reps,” Ramsey said. “I’ll go down to the park and get in some speed training. I’m working with my coaches and really starting to build up my speed and my strength, so I’d say I’m definitely improving during this quarantine, I feel it has been beneficial to me.”

I see Stroud and Justice being a very good combo together on any kid. Energy, wisdom, relational.
3

Heavy gater and nole area. My youth team beat them in the championship years.
O

He has some tools to work with but needs to improve his strength/power and play through his hips more. He's still young so his technique should improve over the next two years. He is a good athlete at this point but needs to keep improving in this area. That's where agility and movement training comes into play. He's a good prospect. It'll be interesting to see where he is in a couple of years.

305407cane said:
If he likes to fish I will sacrifice and take him fishing where we will drop the heavy CIS-sponsored bag
Click to expand...

2022 OT Trent Ramsey by most accounts had a good showing at the 2021 Miami Under Armour Camp. Hopefully he took the opportunity to UO visit Coral Gables. 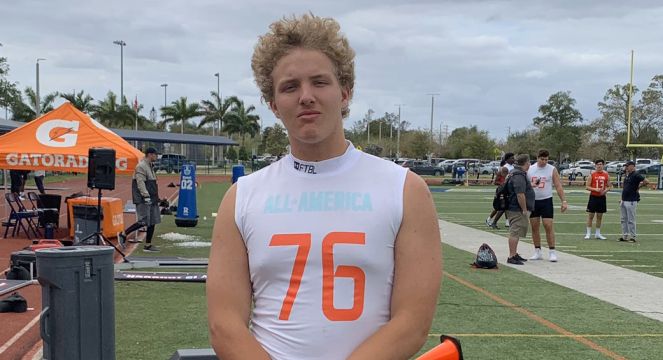 The best college football recruiting interviews in the country