Matthew_Suero
Dec 19, 2018
Poly Prep (NY) DT Jason Blissett signed with the Canes today. Blissett's signature is the 11th of the day so far for Miami.

The 6-4, 270-pounder is currently a 4-star in the national rankings. According to the 247Sports Composite, Blissett is the #318 player nationally, #22 DT in the country, and the #2 player in New York.

Jason Blissett is a player that could have easily never even been on the Hurricane’s radar if some other factors were not in play. Coach Jess Simpson and Miami only found Blissett because they were watching tape from a New York camp while evaluating Penn State signee and former Miami target Adisa Isaac. Blissett showed off his quickness and athletic ability at that same camp and coach Simpson could not ignore it.

Coach Simpson brough Blissett down for Paradise camp and offered the New York based DT two days later. Then, after talking it over with his family, Blissett called Coach Simpson sometime in August and gave a silent commitment to the Hurricanes. Finally on September 14th, Jason Blissett went public with his commitment to Miami.

Blissett actually played mostly end in high school, but he’s the type of jumbo end at 6’4” 270 that UM loves to move inside to take advantage of their quickness and athleticism against slower guard types. And Blissett certainly brings that quickness, as he has tested extremely well this off-season for a big man, clocking a 4.40 shuttle time.

On tape, Blissett plays with good pad level and leverage. He fires off the ball and dips under blocks with ease. Blissett’s hands are fast and powerful and he shows the type of strength and balance that allows him to fight through blocks.

Before his senior season Blissett was a 3-star prospect because there were some people in the recruiting industry who wanted to see him put it all together on the field rather than just test well athletically. Blissett’s on field performance during his senior season put all of those concerns to rest and, as a result, he received a bump to a 4-star prospect.

As a player that has spent the past year or so rapidly improving, Blissett has landed recent offers from SEC schools like Florida, Texas A&M, and Tennessee, as well as Penn State. He’s another in a long line of Surge19 commits where the staff is trusting their own evaluations over recruiting hype, but Blissett certainly has the potential to make Simpson look good in a few years.

Blissett is one of 13 current Miami commits expected to sign this week and he joins St. Thomas Aquinas (FL) 3-star Jason Munoz and Buford (GA) 3-star Jalar Holley at DT in Surge19. As a die-hard Cane, Munoz’s was never going to sign anywhere but Miami and Holley is also expected to sign despite some negative rumors coming out of his official visit.

With Gerald Willis and Tito Odenigbo both graduating and going to the NFL, the Canes are banking heavy that Jon Ford, Nesta Silvera, and Jordan Miller will all develop properly and become a solid trio to complement Patrick Bethel. Behind them, Blissett will compete with fellow 2019 commits Munoz and Holley for a spot in the DT rotation as true freshmen, with the hopes he can develop into a starting-level player by his sophomore season in 2020.

Under Manny Diaz Miami loved to rotate defensive linemen in and out of the game. With Coach Patke and Coach Banda taking over as co-DC’s, I expect Miami to continue with that same strategy. You mix that with the fact that Blissett is the most talented of the defensive tackle signees and you would expect him to get at least a few reps per game in 2019. Should Miami bring in a grad transfer at DT or sign someone who is more college-ready, then I would expect Blissett to take a redshirt year, but as things stand now, it appears he will be relied upon in some capacity in 2019.

View as thread
Another DL 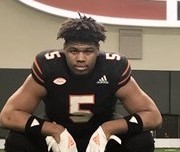 I had the chance to speak with incoming DT commit Jason Blissett over the weekend. Blissett, who is one of three 2019 commits from the state of New York, says that although the offer was somewhat o…
flust.blog
Impressive young man. Explosive.

Kid is going to be a problem for the ACC olines...

Cant wait to see him after a year or two of S&C
If Blissett has a 31 beer dunking Hunts has to at least have a 36. Pair of beasts.
If JMiller can get take that big step and pair with Nesta, UCLA DT, Ford (also needs to get his head out of his a$$), and Bethel to give us solid 5 deep at DT.. we could redshirt Hunte, Blissett and Holley and get them a good year of strength and conditioning. Of course with our luck, it won't turn out like that.
retiring
Why bump a recruiting thread when it's being discussed on the main board.

puertorricane said:
Why bump a recruiting thread when it's being discussed on the main board.
Click to expand...