Stefan Adams
Nov 1, 2018
Sophomore defensive end Jon Garvin was a bit surprised by Boston College’s offense ambushing the Canes early and often to the tune of 17 straight points on their first three drives.

“If anything, I will say, we are human,” Garvin said. “Not to say that we thought we were anything better, but it just shows that we are the same as everyone else. We can get worn down, we can be shocked. Because that’s what it was. It was a shocker for us. So, we just got to make sure that we do better and capitalize on that next time.”

After those first three drives, UM’s defense locked down: the only other points BC scored in the game were off turnovers gained deep in Miami territory.

“We responded. We came, and we played lights out again,” Garvin said. “So, that is what we are supposed to do. We are supposed to execute and just be able to adjust to any situation. So, I was proud of that, because it was tough for us in the beginning. We were not doing well. But better later on.”

What has he seen from Duke on film this week?

“We’ve got to respect all of their players and of course they are another ACC team and this is one of those games where our discipline comes into the game a lot,” Garvin said. “So, we have to be disciplined in our eyes and our assignments and make sure we are not doing anybody else’s job.

The leaders of the team are making sure everyone stays focused on the Blue Devils, not caught up in the losing streak or outside chatter.

“All of the leaders ended up came up and they spoke their peace,” Garvin said. “And we spoke to each other and reassured each other, letting each other know, we are a team regardless of what happens. No matter what goes down… So, everybody is accountable and we are all going to be accountable for each other.”

“To continue to work,” Johnson said. “Play to our standards, the standard we set all camp, all spring. And everything else will take care of itself.”

As Johnson is considered a team leader, what has been his message to his teammates?

What did the defense do differently after those first three successful drives by BC?

“Guys just doing their job, us getting aligned, being used to the tempo,” Johnson said. “That was the fastest team we played this year with the tempo… With our defense and the way we swarm to the ball, teams are going to try and do trick plays to gain yards and get momentum. So, we have got to be alert for that all the time.”

Head coach Mark Richt has taken some heat this week with Miami in the midst of a losing streak, but Johnson stressed the system is not broken.

"I mean, it's been the same system for three years since they've been here,” Johnson said. “It worked for us last year, it's going to work for us this year. Guys just have to execute it."

This will be the third anniversary of Corn Elder’s miracle lateral play against Duke, and Johnson hasn’t forgotten the moment that happened back when he was a freshman.

“I don’t get too much asked questions about it,” Johnson said. “Sometimes I’ll see it on social media, but it was a great play back in the day…It definitely was a moment to remember.”

After a month away from home, Johnson is excited to play at Hard Rock Stadium again.

“You know, that will be good getting some home field advantage,” Johnson said. “We play [well] at home. I think it is going to bring us together, be great for us.”


**After losing to Boston College last week, junior LB Michael Pinckney reflected on his reaction to the loss and how he will move forward.

“Boston College did a great job scheming for us. They had two good weeks to scheme for us,” Pinckney said. “Their offensive coordinator and their team did a great job preparing for us and hats off to those guys. We just have to come back and get everything back together, remind ourselves on what we have to do.”

Is it a compliment when team’s come up with trick plays to try and beat your defense?

“Of course. With that type of thing, of course, but thanks to those guys to come out there and respect us,” Pinckney said. “At the end of the day, we still have to handle our business if we want to be one of the best defenses in the country.”

Does he feel any more pressure to try and force the issue on defense with the offense struggling?

“We try and complement each other as best as we can. There’s no pressure on the defense,” Pinckney said. “We go out and we tell each other we have to do our jobs. Each drive is really important and we have to take every drive seriously.”

Pinckney has felt things haven’t been quite right since the FSU game when Miami narrowly escaped with a home win over a sub-par Seminoles team.

“These last three or four weeks have been tough,” Pinckney said. “Florida State, we came and we did something real good, but I felt like it wasn’t clean enough. Then a week after that we took an ‘L’ and then the following week we took an ‘L’. It’s tough. I mean, I don’t like it. Nobody likes to lose especially when we put all this time and effort. That’s on the leaders. We have to take control of the team and get back on that win streak.”

So what needs to change for it to get better?

“Just keep working hard and play as a team,” Pinckney said. “We can’t listen to the outside noise of everybody talking and saying what they have to say. We have to stay inside and make sure everything inside the house is ready.”

With the team back at home this week, Pinckney feels that this is a golden opportunity to right the ship and change the narrative of Miami’s season.

“We’re back at home this week and that’s important to protect our house,” Pinckney said. “It’s going to be a big week for us…A win is a win. We have to get it in. We have to do what we have to do. We pride ourselves in winning games and it’s not like us to lose. We don’t like losing. We put all this effort and time into something and you end up losing, of course no one likes to lose. We come back and try and get that win. It’s going to feel real good.”


**Like everyone else, junior DT Pat Bethel wasn’t happy with how the Canes defense started the game against BC last week.

“We just have got to get the ball stopped earlier. It’s plain and simple,” Bethel said. “After that, we just started stopping the ball. We didn’t let them start scrambling and picking up those extra yards.”

Playing in front of the home crowd again is something that Bethel looks forward to, but he says it won’t make a difference if Miami doesn’t play their game.

“We love being at home with the fans, obviously,” Bethel said. “But at the end of the day it’s us and the white lines. And we have got to play our ball, regardless of where we are at. That’s just the fact of the matter.”

View as thread
Defense has definitely taken on Manny’s personality. They are conscious to what is actually happening and are allowing themselves to be corrected .
Meanwhile on Awfense 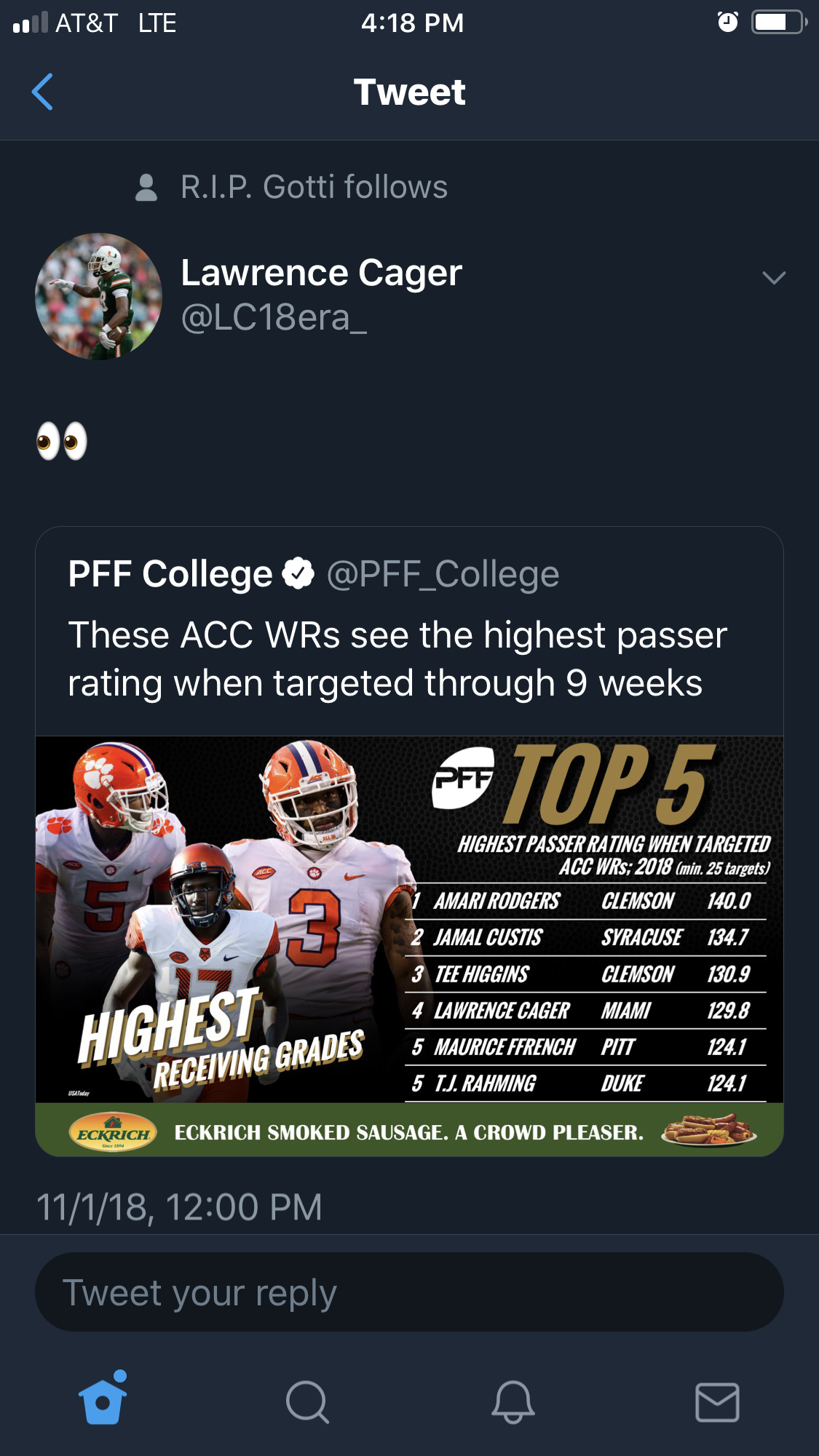 The canes are 5-3 and Cager is stat chasing
Last edited: Nov 1, 2018
The defense will be focused but what about our inept offense? Does anyone expect anything different or more of the same?
I like the defensive attitude..."Protect our house!". If I remember correctly, I believe we have a 12 game regular schedule home winning streak dating back to 2016 to protect!

I believe Rosier plays a little better at home also so let's go get that Win Saturday.

Go Canes!!!
"Their offensive coordinator and their team did a great job preparing for us and hats off to those guys. We just have to come back and get everything back together, remind ourselves on what we have to do.” - Michael Pinckney

Funny how that usually works out. BC went above and beyond to throw our defense off balance. Yet, our O-coordinator/coach...........you know what, never mind. It's frustrating.

Rellyrell said:
"Their offensive coordinator and their team did a great job preparing for us and hats off to those guys. We just have to come back and get everything back together, remind ourselves on what we have to do.” - Michael Pinckney

Funny how that usually works out. BC went above and beyond to throw our defense off balance. Yet, our O-coordinator/coach...........you know what, never mind. It's frustrating.
Click to expand...

you mean an offensive game plan is actually supposed to be designed to use plays and formations that will create mismatches with Miami's passing game and try to take advantage of a defensive weakness ? what a concept !

mdpcane said:
you mean an offensive game plan is actually supposed to be designed to use plays and formations that will create mismatches with Miami's passing game and try to take advantage of a defensive weakness ? what a concept !
Click to expand...

Rellyrell said:
I'm not 100% sure, BUT I detect a hint of sarcasm in this post.
Click to expand... 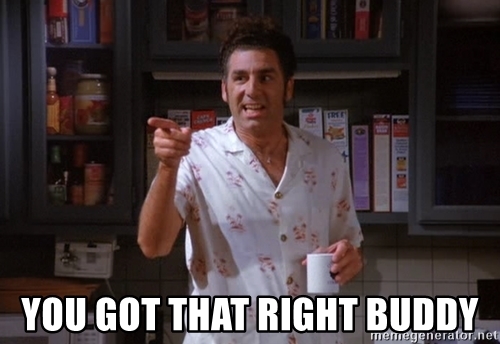 SinisterCane said:
Meanwhile on Awfense
View attachment 68040
The canes are 5-3 and Cager is stat chasing
Click to expand...

So he shouldn't be proud that he's doing his part? lmfao

SinisterCane said:
Meanwhile on Awfense
View attachment 68040
The canes are 5-3 and Cager is stat chasing
Click to expand...