I hope he is more flexable than the two women be hind him in the video!

The Miami Hurricanes have signed dozens of standout prep players from Miami-Dade, Broward and Palm Beach counties during the past five years. But as explained here, not enough of them have met expectations or become elite college players.

ESPN’s ranking of the top 300 prospects in the 2022 class includes 17 players from South Florida.

Where the Canes stand in the competition for those players, listed by order of appearance in ESPN’s top 300:

▪ Miami Pace defensive end Shemar Stewart (rated by ESPN third overall among all Class of 2022 prospects nationally): The 6-5, 235-pound edge player this week spent parts of two days at UM, speaking with coaches and is scheduled to return for a 7-on-7 camp on June 13. It’s no secret that LSU is high on his list, and he plans to visit Florida, Georgia, FSU, Clemson, South Carolina and Alabama this month. But Miami is very much in this after the Canes reportedly made a favorable impression on him this week.
Stewart told Canesport this spring that on-field success will be key to Miami’s chances of luring him. “I have to see them win,” he said. “How they do this season will have a big impact.”

▪ Hollywood Chaminade-Madonna defensive end Kenyatta Jackson (rated 74th overall): He has said he’s considering UM, but Miami faces formidable competition (Clemson, Ohio State, UF, others). Jackson, who wasn’t a Canes fan growing up, has June visits scheduled to Ohio State and Oklahoma. But UM remains in the mix; the Canes landed two Chaminade players in the 2020 class (Allan Haye and Thad Franklin) and must hope that they — along with defensive coaches Travaris Robinson and Jess Simpson — sell Jackson on the merits of becoming a Cane. Robinson has taken over his recruiting and those two seem to have forged a good relationship.

▪ Plantation American Heritage outside linebacker Marvin Jones (107th): FSU is considered the favorite for the 6-4, 220-pound linebacker; his father was arguably the best linebacker in Seminoles history. UM, Ohio State, Alabama and Clemson are among others in pursuit. UM must hope that Jones’ uncle (former UM star Santana Moss) or mother (who was on the Canes’ track team) can sell him on the Canes, who are underdogs here.

▪ Fort Lauderdale Dillard defensive end Nyjalik Kelly (134th): He decommitted from FSU in April, and UM has a decent chance here. He spent time on UM’s campus this week, as an 247 Sports’ Andrew Ivins noted, defensive line coach Jess Simpson has told Kelly and Stewart they are good fits for UM’s 4-3 defense. It would be a disappointment if UM doesn’t land at least one of these skilled pass rushers though competition is intense for both.

▪ Plantation American Heritage athlete Jacolby Spells (138th): Spells told 247 Sports this week that UM is in his top three with West Virginia and Indiana. And Georgia has begun inquiring about Spells, which could change things; Spells has called Georgia his “dream school.” So UM’s chances are better if the Bulldogs don’t offer him. Spells attended UM’s cookout this week and will take an official visit to Miami next weekend after visiting West Virginia this weekend. He can play wide receiver but believes his future is at cornerback.

▪ Miami Columbus offensive tackle Julian Armella (168th by ESPN): The difference in how Rivals and ESPN rate the 6-6, 320-pounder is stunning. Rivals ranks him as the No. 1 offensive tackle and sixth-best player overall in the country in the 2022 class.
Rivals’ evaluation appears far closer to how he’s viewed by major colleges; I’m dumbfounded why ESPN rates him this low.
He’s a high priority for the Canes, but Miami faces stiff competition from UF, Clemson, Alabama and LSU, among others. And he grew up an FSU fan. He chose to spend Monday night at FSU’s Midnight Madness event, when recruits nationally were allowed on campus for formal visits/events/camps the first time in more than a year. But then he rushed back to South Florida to attend the Canes’ barbecue on Tuesday. Armella — who isn’t tipping his hand about his favorites — will visit LSU and Alabama this month and then return to UM for Paradise Camp on June 26. Miami must hope that interior lineman and incoming freshman Ryan Rodriguez, a close friend of Armella, enjoys his UM experience and helps convince Armella, his former high school teammate, to join him at Miami. Armella, who has lost 40 pounds, told Canesport that he will name a top five during the 2021 season, and UM has a good chance of making that list.

▪ Coconut Creek cornerback Trevell Mullen (178th): The 6-foot, 155-pound corner was on UM’s campus this week and has unofficial June visits set up to UF and FSU and an official visit to Indiana. He previous listed a top four of UM, Indiana, West Virginia and Oregon. UF could become a major factor if it begins to pursue him aggressively. But UM has a good chance at this point. Rivals rates him more highly than ESPN, ranking him 128th overall in the 2021 class.

▪ Miami Central outside linebacker Wesley Bissainthe (184th by ESPN): Another player who appears absurdly underrated by ESPN; Rivals rates him 88th in the country among all 2022 players and 247 Sports has him 113th. The 6-1, 195-pounder attended this week’s UM cookout and plans to take an official visit to UM on June 18. But FSU looms as a serious challenger. The Seminoles convinced him to change his official there from June 18 to during the season, hoping the game day experience leaves him with a lasting impression. He will visit West Virginia this weekend. And Alabama remains a possibility.

▪ Homestead defensive end Dante Anderson (rated 185th overall): The 6-3, 205-pounder has a close relationship with UM recruiting coordinator David Cooney and that should help the Canes. He plans to visit Florida on Thursday and Florida State on Saturday, with later visits planned to Georgia Tech and Mississippi. Penn State also is a factor. Anderson reportedly wants to go to college with Homestead’s Daniel Lyons, a three-star defensive tackle who has an offer from Miami.

▪ Plantation American Heritage cornerback Earl Little (198th): UM hopes to land a legacy player rated 93rd overall by Rivals.
His father was a standout at UM and he told Rivals a few months ago that if he had the opportunity to sign with UM last summer, he would have. (Juniors, of course, aren’t permitted to sign with colleges.) But this is worrisome from a Canes standpoint: Rivals national recruiting director Adam Gorney said Little told him recently that Alabama is recruiting him harder than any school, and Gorney said Little is impressed with Alabama and plans to visit in the months ahead. He plans to visit USC, Oregon and Alabama this month. UF also could be a factor. After attending a UM barbecue on Tuesday, Little told 247 Sports that UM is “definitely in my top five. I have to come during the season and see what it is like in the season for the football players and make my decision off of that.... It is a tough process to try and figure out what the best fit is for me. ““I know I have Miami in my backyard and my father went to Miami too, so I know they are a great option. I have a tough decision to make, but I will get through it all once I take all my official visits and then I will have a solid idea.”

▪ Fort Lauderdale St. Thomas Aquinas quarterback Zion Turner (222nd): UM pursued him before getting a commitment from four-star Georgia based quarterback Jacurri Brown, who might be the only quarterback in this class.

▪ Deerfield Beach running back Jazuin Patterson (275th): Miami has offered, but the Canes might not even take a running back in this class. He told Rivals that Penn State and Auburn have impressed him.

▪ Miami Gulliver safety Travious Lathan (279th): The 6-1, 200-pounder has been told he’s No. 1 on UM’s ranking of outside linebackers, according to CaneSport. Lathan has UM in his top eight, but his parents reportedly want him to go away for college. He plans to visit Pittsburgh this week, with visits to Indiana and West Virginia later in June. And he likely will visit Oregon and LSU later on. The Canes are in it, but not the favorite.

▪ Chaminade-Madonna cornerback Brian Dilworth (291st): The 6-foot, 175-pounder was committed to Auburn for nine months before decommitting in February. He told Rivals earlier this year that UM, Penn State, Wake Forest, Georgia Tech and Connecticut have subsequently contacted him. He had 10 interceptions during the past two seasons.

▪ St. Thomas Aquinas running back Anthony Hankerson (292nd): The 5-8, 190-pounder has offers from UM, UF, FSU, Georgia and West Virginia, among others.

▪ American Heritage defensive end Richard Thomas (295th): He committed to Indiana on May 14, bypassing offers from UM, Michigan, FSU, Oregon and others. 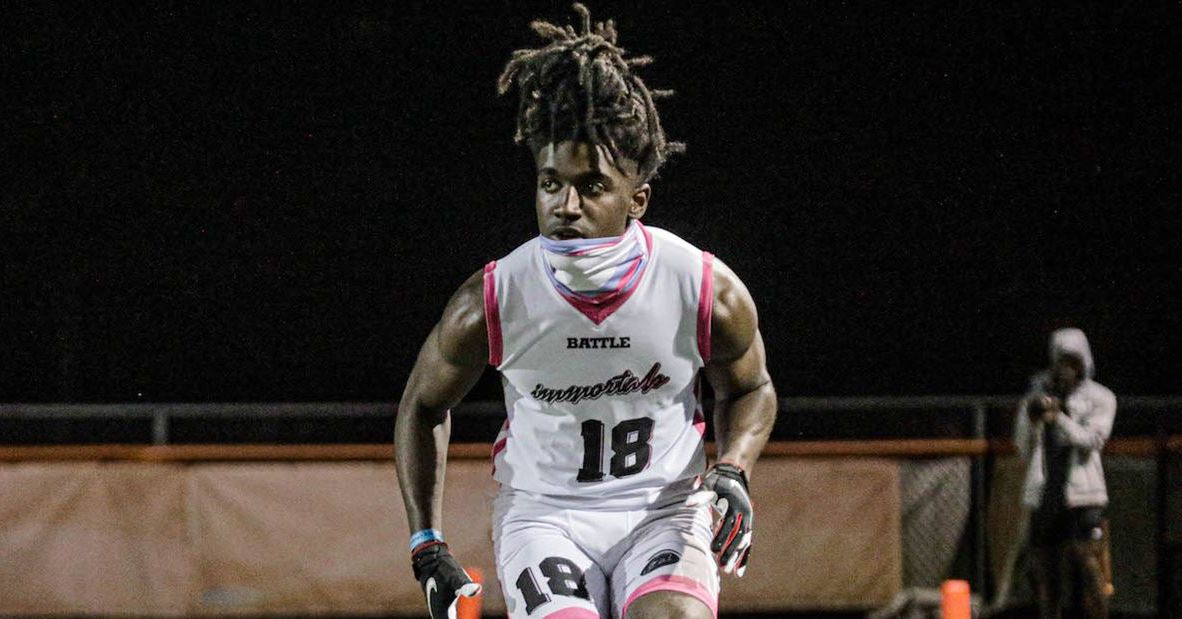 Let’s look at the landscape of the first official visit weekend in more than a year, shall we?

3rd team is disrespectful. The man wasn't even listed on the top 50 CB's. Crazy, considering he'd played and made impact plays at UGA.

I'd be willing to bet he won't end up 3rd team. 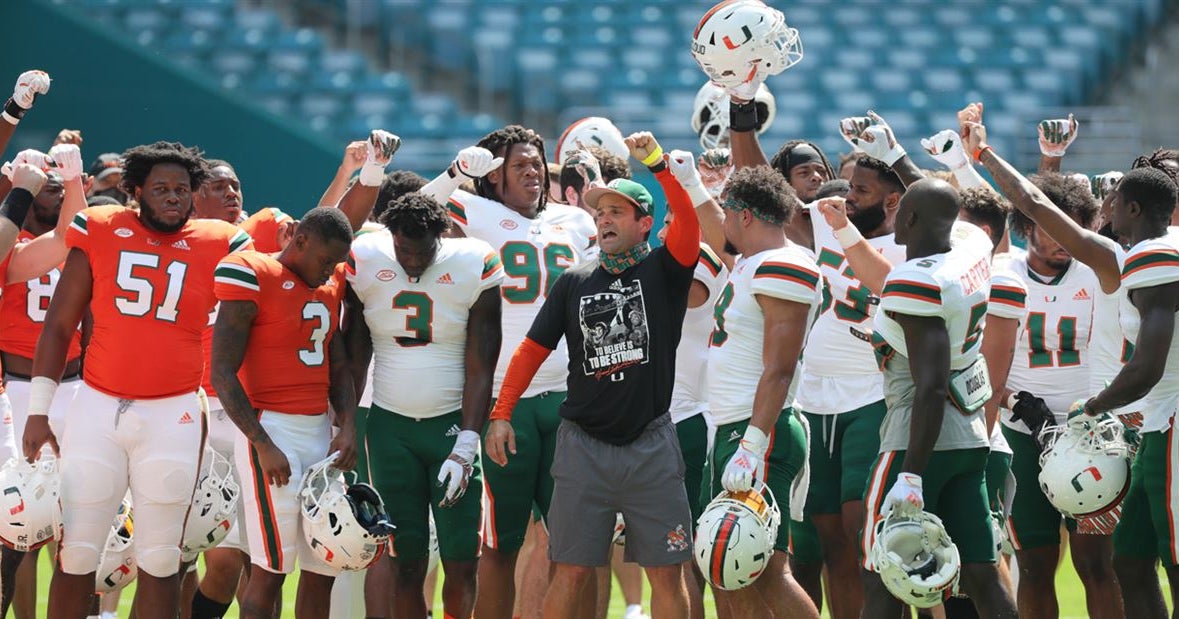 The Miami Hurricanes are a team to watch in 2021.

Cane4life18 said:
3rd team is disrespectful. The man wasn't even listed on the top 50 CB's. Crazy, considering he'd played and made impact plays at UGA.
Click to expand...