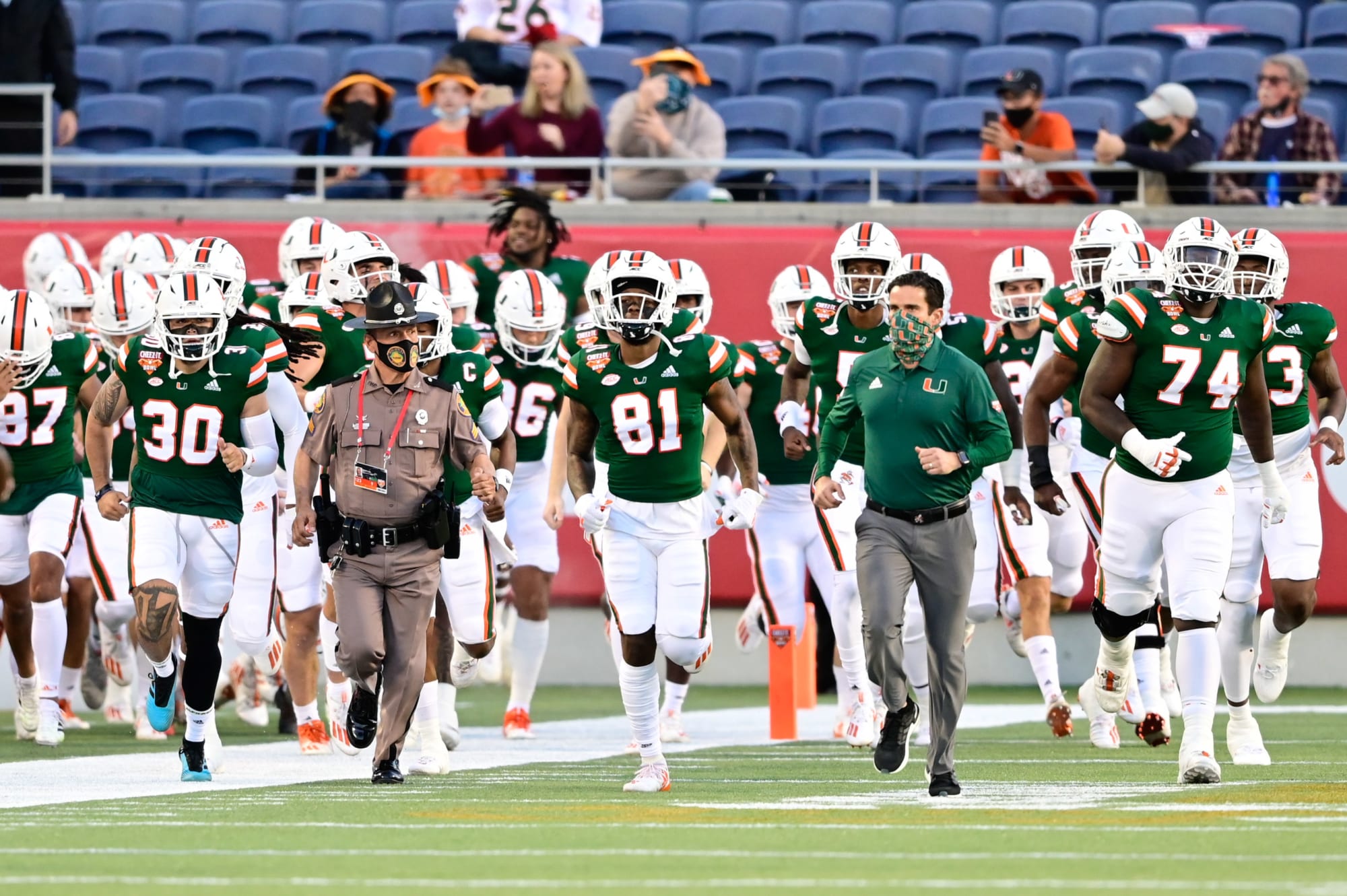 The Miami football program averaged the 15th best-signing class over the last five years according to Chip Patterson of CBS Sports. The average Miami signi... 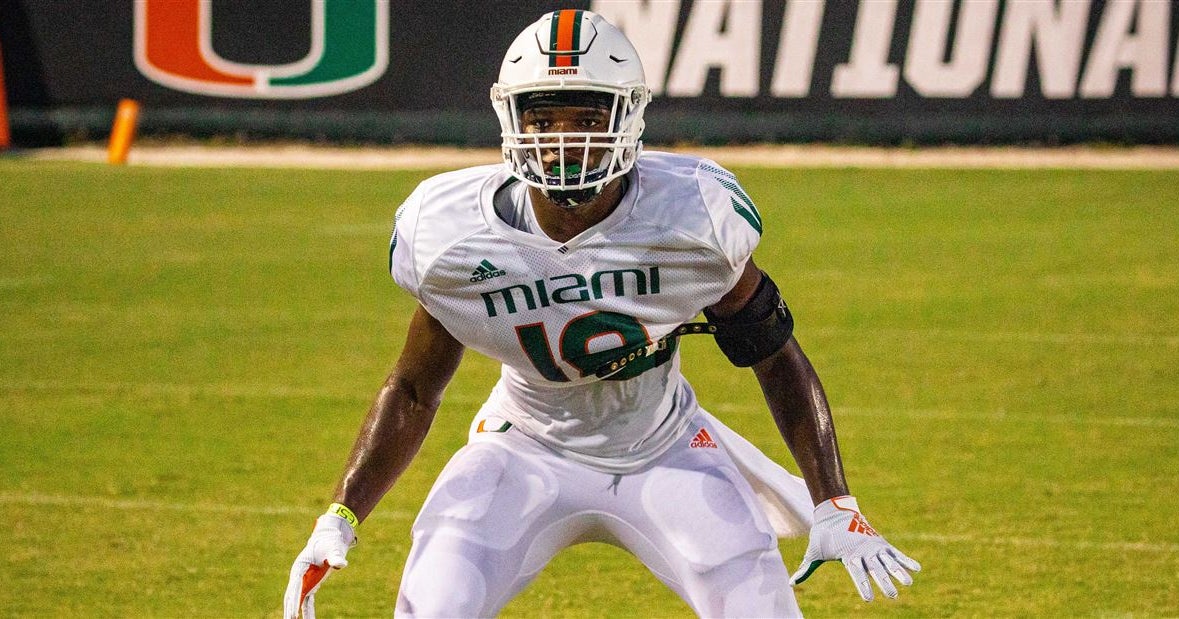 The 2021 defensive coaching staff has been totally revamped from the previous season and that means players have a chance to make a strong impression on new coaches. 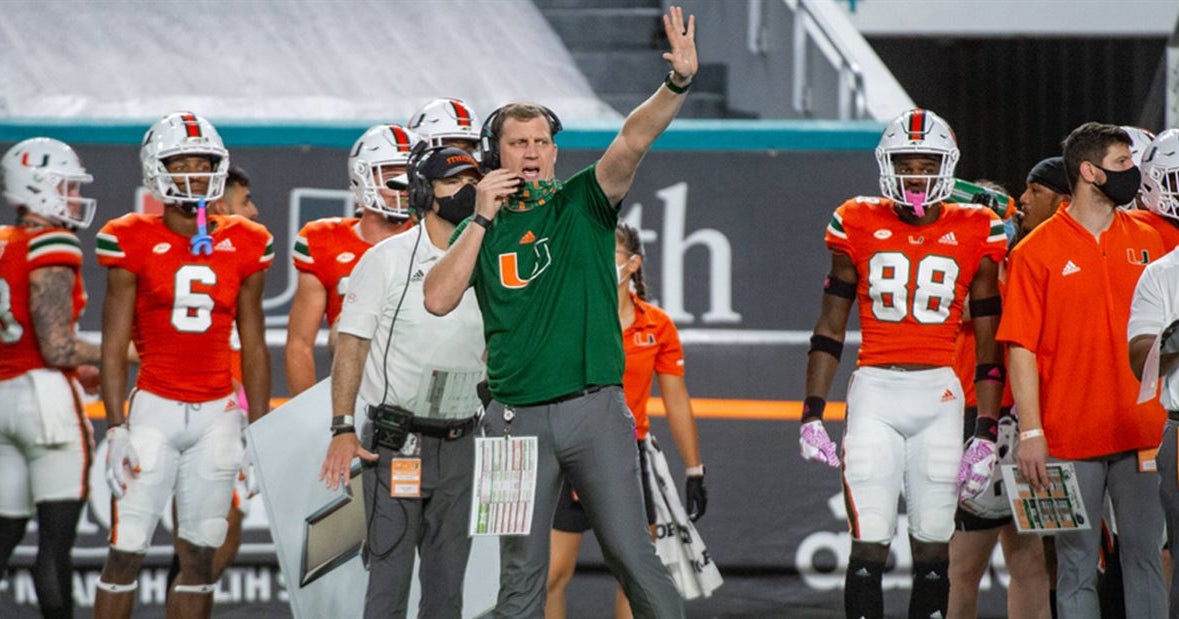 ESPN highlights Rhett Lashlee as a coordinator to know in 2021

Offensive coordinator Rhett Lashlee is emerging as a hot name after a successful 2020 season.

I love it when I walk in front of someone wearing a VT jacket while I'm wearing my "5 time National Champions" jacket. 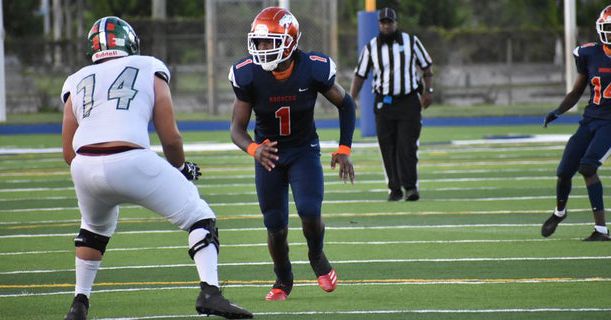 The Homestead Duo: Can The Canes Keep Dante Anderson and Daniel Lyons In Miami?

A dominant duo on the defensive line out of Homestead, and big targets for Miami in recruiting. 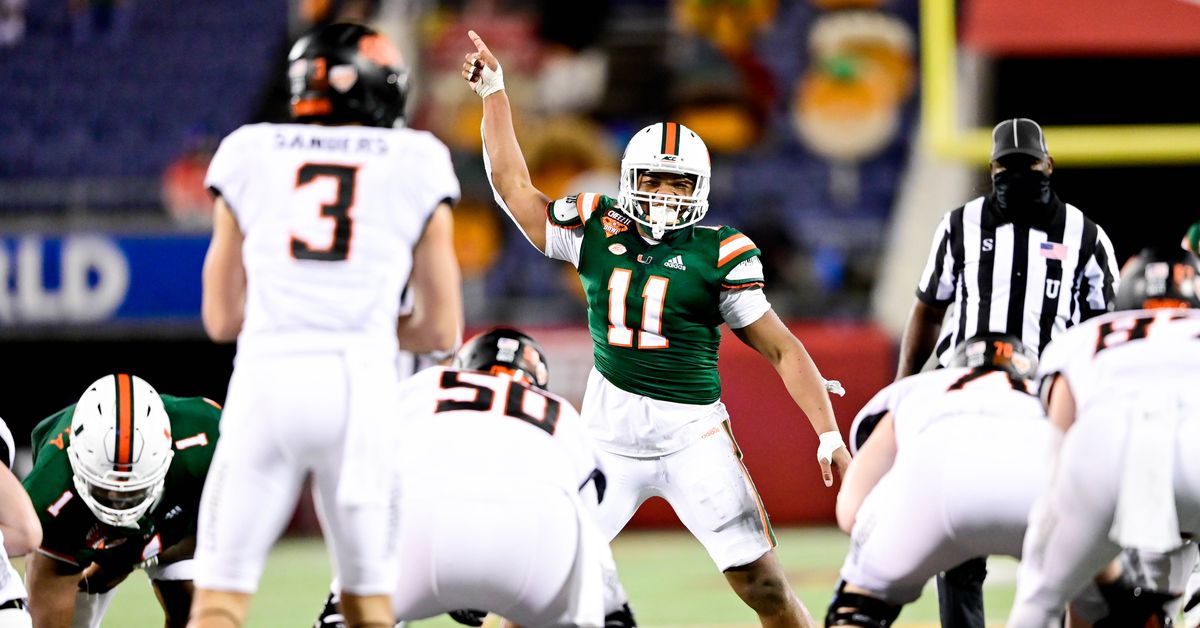 Stacking the linebacker room with fast and physical playmakers is crucial for Miami in recruiting this year.

▪ Here’s one reason UM chief of staff Ed Reed isn’t on the Canes’ coaching staff: Simply being a position coach apparently doesn’t appeal to him.

“I’m not a position coach, man. I can coach positions but no,” he told The Baltimore Beatdown podcast when asked about potentially working on John Harbaugh’s Ravens staff.

”[Young players] haven’t played the game and just won’t even hear my voice putting me at a position coach. My voice won’t even be heard. So that’s why I tweeted about being a [defensive coordinator] or head coach. I know what I’m capable of, I know what I aspire for. You gotta know your worth.”

UM people say Reed — who was hired by UM late last January — has been a big asset in recruiting. How much he has impacted day-to-day operations is less clear.

Via Twitter, Reed recently told former 790 The Ticket host Brian London that he intends to remain with the Hurricanes.

▪ Per Canesport, UM added another Class of 2021 cornerback, three-star Michigan-based Myles Mooyoung, who bypassed scholarship offers from Houston and Washington State to instead be a preferred walk-on at UM.

He will compete with incoming freshman Malik Curtis to be UM’s No. 7 cornerback, with Curtis clearly entering with the edge.

On cornerback Tyrique Stevenson, who transferred to the Hurricanes from Georgia: “He came down to Miami and Georgia originally. He’s the perfect fit here, local guy, very athletic. He can’t just blend in. He has to stand out from Day One. He has to be the guy. He’s the best cornerback they’ve got by far.

“He’s big, has speed. He’s going to be a huge asset. Great tackler, quick, has long arms. It’s a much better room now. Too many blown coverages and penalties came out of that secondary.”

On defensive end Deandre Johnson, who transferred to Miami from Tennessee, Blustein said:

“He was at [Miami] Killian for three years and Southridge for one and developed into a really good player. Good quickness. Quincy Roche, coming in, was a little more athletic. Johnson is more physical than Roche. Anyone with SEC experience, you have a huge advantage.”

“He’s a freak — quick, strong, a manchild,” Blustein said. “UM will be very pleased they offered him early. He moves extremely well. He’s got no fat on him whatsoever. He could be 285 [pounds] by the time he gets to Miami, 290. I talked to him; humble kid, hard worker.”

Johnson, 6-1 and 225 pounds, is a three-star prospect but likely is being underrated. 247Sports rates him the nation’s No. 37 defensive end; Rivals doesn’t rank him among the top 50 defensive ends.

“I think Jamaal is a top-10 kid statewide,” Blustein said. “Miami does well with the Chaminade kids.”

If Blustein worked at UM, what uncommitted 2022 players would he most covet?

▪ Blustein likes Diaz’s offseason coaching changes and mentioned defensive backs coach Travaris Robinson’s addition as being important because “he has become a really, really good position coach. A lot of people spend more time dwelling on him as a recruiter but he has matured into one of the best position coaches around.

“Not only can he reel the guys in but he can keep them here [as opposed to turning pro prematurely]. His kids he’s worked with have always been technically sound. He’s been the gem of the offseason coaching changes.”

Something about that girl - she really sticks out. 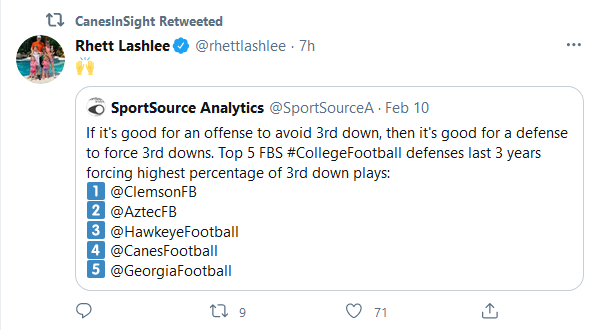 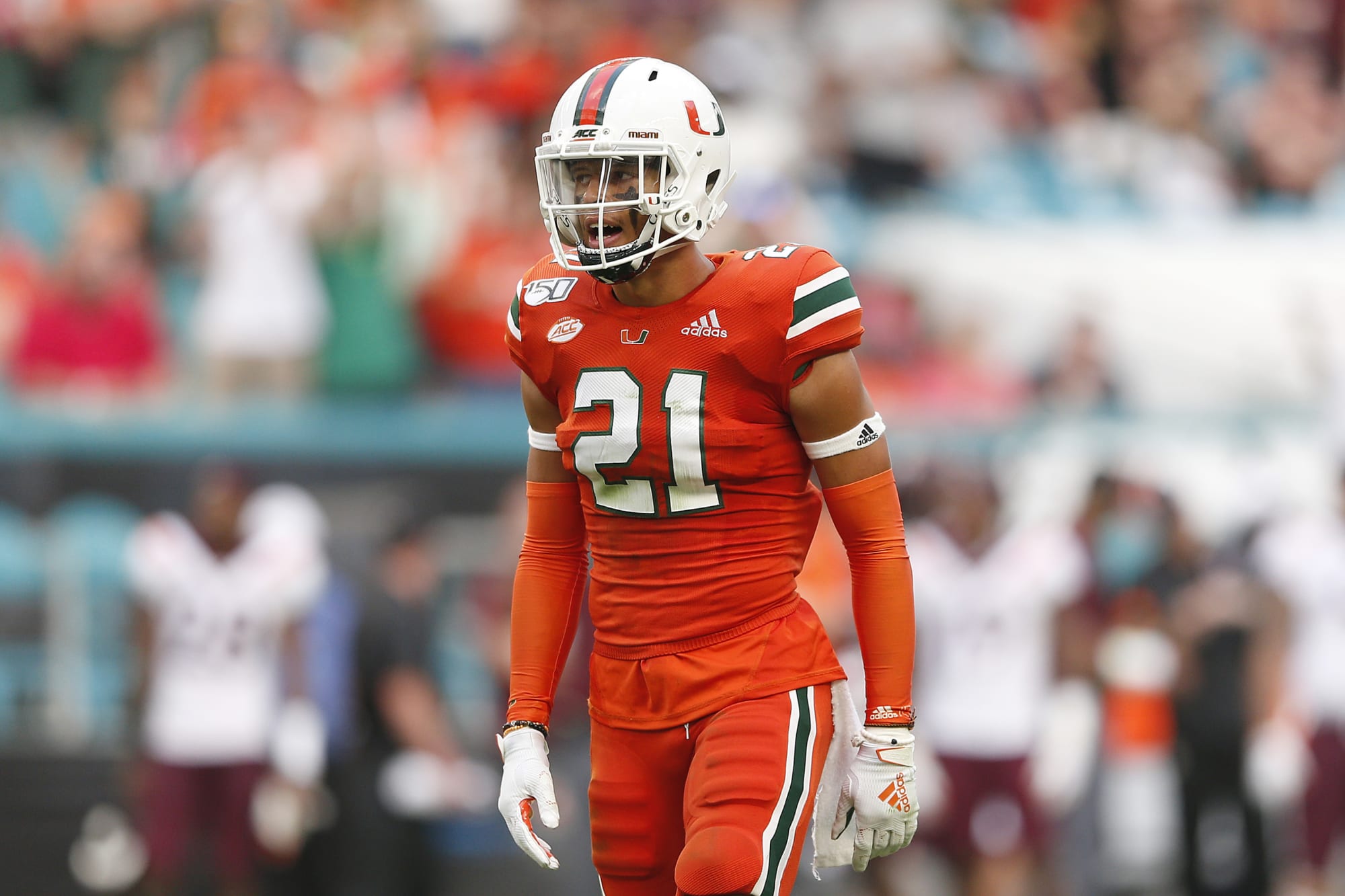 Safety Bubba Bolden told Joe Zagacki on Hurricane Hotline on WQAM this week that he likes head coach Manny Diaz taking over play-calling on defense for the... 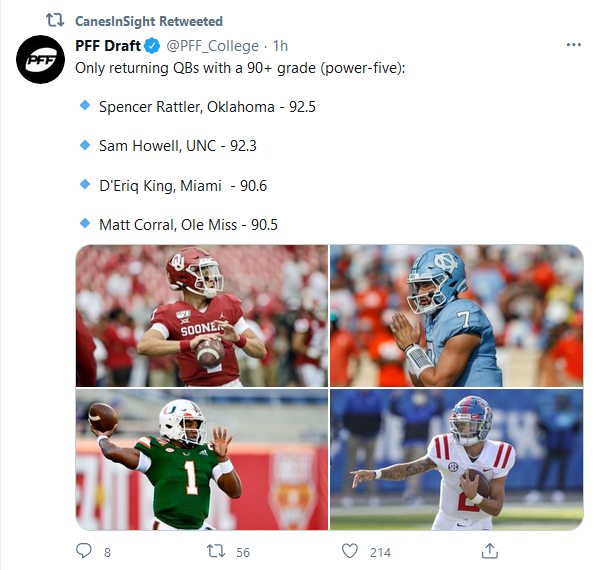 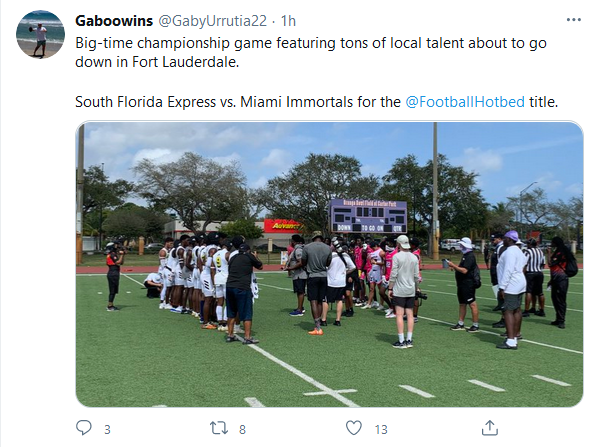