Meet Chloe V. Mitchell: one of the first college athletes to make money from her likeness 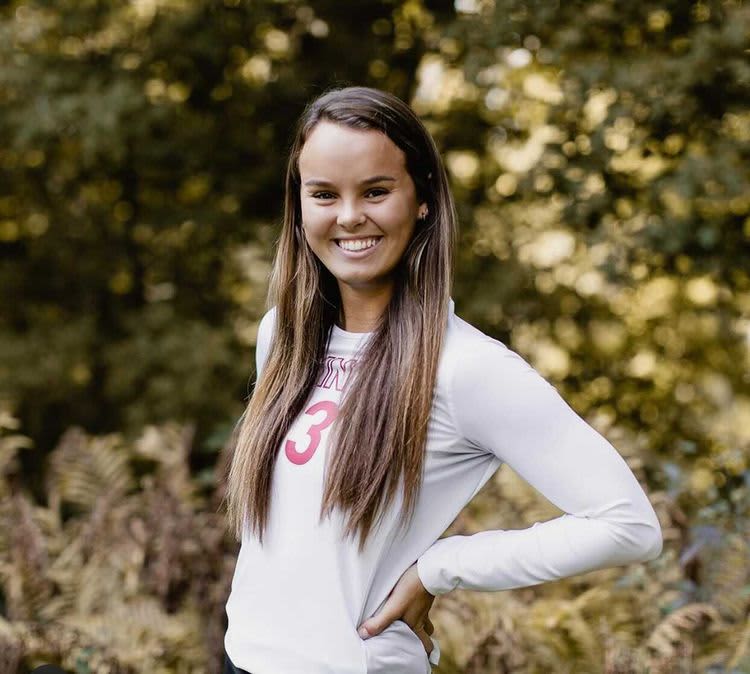 Meet Chloe V. Mitchell: one of the first college athletes to make money from her likeness

A freshman volleyball player at Aquinas College in Grand Rapids is believed to be the first college athlete to take advantage of new policy changes.

For decades, college athletes have been prohibited from financially benefiting from any use of their name, image and likeness, raising concerns from athletes such as LeBron James and politicians such as Senator Bernie Sanders that these policies can limit, or even take advantage of, student-athletes.

In 2019, athletics organizations began to amend these rules and in October 2020, the National Association of Intercollegiate Athletics (NAIA) passed the first legislation of its kind in college sports to allow its student-athletes the opportunity to be compensated for use of their name, image and likeness.

Now, Chloe V. Mitchell, a freshman volleyball player at Aquinas College in Grand Rapids, Michigan is believed to be the first college athlete to make money from her likeness.

“We live in a country that thrives off of capitalism. That’s what we do. That’s kind of our thing,” she says. “So if we are given that opportunity to participate in [capitalism], as I think we should be, speaking as a student-athlete, then we should be able to make money off our name.”

Mitchell has 5,510 followers on YouTube, 48,600 followers on Instagram and a whopping 2.7 million followers on TikTok — an audience she garnered practically by accident in April 2020 during her final year of high school.

“I was bored. I was quite honestly really depressed because quarantine had taken away my senior year, I had no prom, and you know, we’re all down in the dumps because of Covid,” she says. “I needed something to take my mind off things. I needed some physical labor. I needed space from my family.”

The now 19-year-old found that space in a small shed in her backyard and decided to turn it into a “she-shed.” Millions tuned in to watch the cleaning and renovating process.

“I was already committed to Aquinas College and meanwhile my coach at Aquinas had been following the whole thing. Then I started to get sponsors,” says Mitchell describing her first sponsorship which was for $3,000 with a beverage company called Smart Cups that she says funded her computer for college. “But once summer was coming to a close and my fall freshman season was approaching, I was like, ’Oh my goodness, I may not be able to make these videos anymore because if I make money, it could jeopardize my eligibility as a college athlete.”
This problem was one her father, Keith Mitchell became familiar with when he played football for the University of Michigan in the 1980s. As he saw regulations changing, he co-founded a company and mobile application with his daughter called PlayBooked that helps athletes connect with social media sponsors — a tool that his daughter says has been a big advantage.

Then, to Mitchell’s benefit, “the NAIA beat the NCAA to the punch” and officially changed their rules in time for her first collegiate season, which meant she was able to continue accepting sponsorships. Her first official sponsorship as a college athlete was promoting golf clubs.

Critics of allowing college students to earn money based on their likeness have previously expressed fears that it would turn amateur college athletes into professional athletes. Others add that scholarships are a kind of compensation.

Mitchell, like many athletes in the NCAA and the NAIA, receives a partial academic and athletic scholarship that does not cover her room and board. She adds that for women, there are significantly fewer opportunities to pursue sports professionally and that not all sports have lucrative professional leagues.
“Honestly, I am a girl who’s playing NAIA volleyball and has no plans of playing after college. It’d be awesome, but realistically, that’s not going to happen,” she says.

While ESPN estimates that top-tier NCAA athletes could earn between $500,000 and $1 million per year in sponsorships, Mitchell says she is far from these totals, noting that she plans to become a physician’s assistant rather than pursue a full-time career on social media after graduation.

For now, the volleyball player says she enjoys making DIY videos and adds that the most valuable part of the sponsorships she receives has been professional lessons, such as learning how to network and how to coordinate a contract.

In this way, Mitchell exemplifies what may become a common trend among future college athletes: balancing school, sport and significant, but modest, social media side hustles — rather than the full-time scenarios athletic administrators have historically warned of.

“I believe that each athlete should be able to monetize their brand. It’s American,” says Mitchell. “And I’m grateful for the influence and the amount of followers I’ve garnered on TikTok, but even if that goes away. I’ll always be creating and doing DIYs. It’s just what I do.”
H

I just want the NCAA Football series back.
2

The comments in this post are going to be good.

Can she kick a football?

Looks like she’s making side money, like most young ppl, from social media. I don’t see her making money off her “likeness” per say v. a chick who’s on Tiktok that happens to play volleyball.

Plenty of billboard space on that forehead.
2

This is what I was waiting for.
R

hanna445 said:
I just want the NCAA Football series back.
Click to expand...

TheOriginalCane said:
Can she kick a football?
Click to expand...

You beat me to it.

This is why we can't have anything nice.

Off-Topic Best places to stay in Miami for college kids