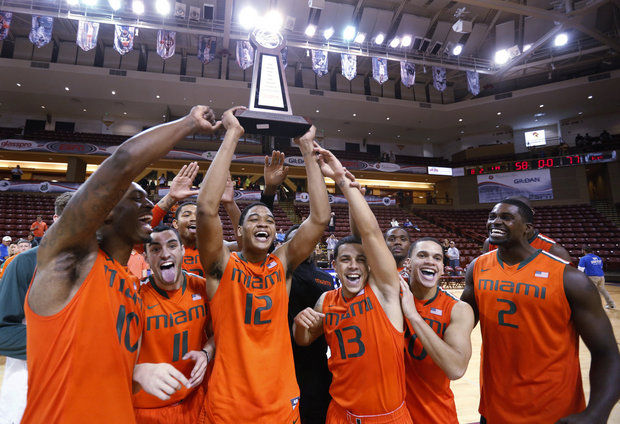 With Thanksgiving around the corner, ‘Canes fans should be thankful. We have life, liberty, and Larrañaga. Canes basketball is all we have right now because baseball is in training and football is vastly underachieving, again. While football, currently with 6 wins, is fighting for their lives to finish the regular season with 7 wins, Miami basketball is close to securing 6 wins by the end of November. Moreover, basketball has a win against a ranked opponent, a tournament championship, and no losses.

After a close victory over UF, Coach L and his squad were able to take home the Charleston Classic Title with an average margin of victory of 22.3 points. Miami was able to capitalize on their talent advantage in each game while competing against Akron, Charlotte, and Drexel. None of these teams will show up as “quality” wins when the committee is selecting our seed for the NCAA tournament. Nevertheless, these three opponents proved to be a great measure of the mass amount of potential this Miami team has. The ‘Canes played with aggression and great endurance. In the Charleston Classic, Miami outscored opponents in the second half by an average 15.67 points. Lets look at the final results with recaps from different angles.

- Angel continues to be the best player on the court for the Hurricanes. His active hands have allowed him to create a plethora of turnovers on the defense side of the ball. He had a combined 14 blocks and steals during the tournament. On the offensive of the ball he resumed his role as the primary facilitator. His assist numbers do not do him justice for the amount of looks he has created through dribble penetration. He struggled shooting at times, but he continued to create opportunities for himself through pick n rolls and 1 on 1s. Who can stay in front of this man? 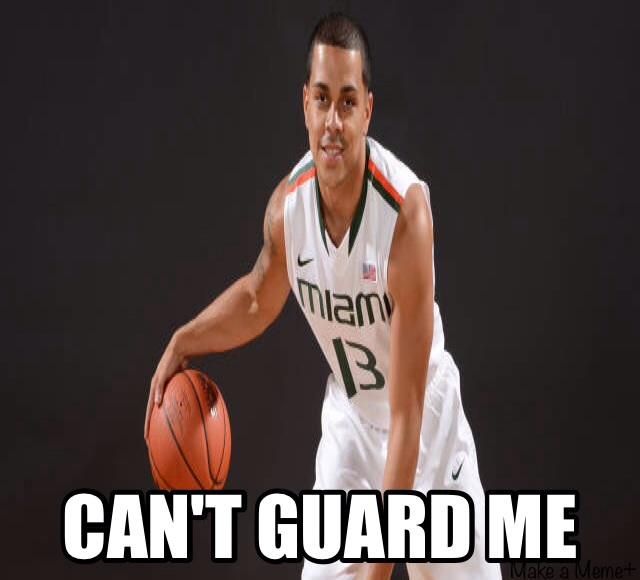 Outlook: Captain Rodriguez took home all tournament honors and continued to show flashes of a smaller Shane Larkin mixed with J.J. Barea. Going to be a fun year watching him.

After a disappointing game against Florida, Manu played much better in the tournament. Manu was very efficient on the offensive end. He had the second best tournament field goal percentage on the team and only had one turnover the whole tournament. He still leaves some to be desired on the defensive end, in both zone and man, but he looked much better than the Florida game.

Outlook: If he continues to play like he did the tournament, he will be a nice third option for Miami. I expect him to get a lot of open looks as a zone buster this year. And he will knock them down. When he is arguably your third best shooter, things are looking good.

This tournament showed anyone who watched how talented, strong, and athletic Sheldon McClellan is. During the broadcast, the announcers talked about how Coach L called him the most talented offensive player he has ever coached. He was very active on the boards and had no problem playing the 4 when Palmer replaced Joe Thomas.

Outlook: Sheldon is a sensational athlete that is a consistent jump shot away from being an NBA draft pick. He is good at creating space off the dribble and score inside via cuts or post moves. Not many guys in the ACC can finish through contact at the rim like Sheldon. I expect multiple 20+ scoring games from Sheldon. Oh, and more of this.

Tonye made the all tournament team by averaging close to a double-double. At moments, he looks like a great rim protector. Then he will play soft in the paint when rotating over in help side. Offensively he does not need to do much. Just finish at the rim and make free throws. No need to take those mid range jump shots that he is about 1-15 on the season for. The most important statistic from this tournament was Jekiri averaging 17.45 RP48. He needs to continue rebounding near this rate with UM being undersized and thin with their bigs depth. Overall he had a good tournament and looks better each game. He has really developed over the years.

Outlook: He is essential to our success this year. With him healthy, the ‘Canes will be able to manage until Ivan comes back January 13th.

Thomas does not play much in the second half, but he is body at a position we are very thin at. He had a nice finish against Drexel but did not much besides that.

Outlook: At this point, Omar is a much better offensive player than Joe. For Joe to play more, he will need to grab more boards since there is a low probability of a fifth year senior greatly improving his offensive game. He is averaging 7.7 RP48 on the season compared to Omar Sherman who is averaging 10.9 RP48.

Throughout the tournament he was able to finish at the rim and stretch the floor. Omar shows no hesitation shooting the three and is great pick n pop screen man. He was also very effective on the boards averaging 10.9 RP48, which was second on the team to Tonye Jekiri.

Outlook: It is going to be hard for Coach L not to play Omar more in these next 9 games.

Palmer was efficient scoring the basketball throughout the tournament. He is a smooth scorer that provided depth as a wing off the bench.

Outlook: He understands floor spacing better than anyone on our team. Subtle movements at the right time always give him opportunities to get open threes. He is a great scorer off the bench that gives us some size on the wing.

Another freshman that made plays in the tournament. Each game he has had a play that made you think, wow he is going to be great. He had a few more turnovers than a coach would hope, but overall played well. Jaquan brings the AAU mentality that he is not scared of any player on the court. Going to be hard for Deandre to get minutes with the way Jaquan is playing.

Outlook: Jaquan can play both guard positions and is excellent at dribble penetration. He is a willing passer in the paint, and again, his assist numbers do not do him justice. He will create a lot of open looks for teammates this season and can dribble penetrate against almost any defender. He will be a star at Miami.

Nothing to really complain about here. We start out slow, but we are getting good looks throughout the game. The same looks we get in the second half we get in the first half. Team chemistry is rising with every game. The players continue to make the extra pass and are getting used to playing with each other. We went 25/60 (41.7%) from three during the tournament and in the championship game 5 players were in double figures. 6 out of the 8 rotation players have the potential of dropping 20 points any night.

On a micro level, we have great perimeter defenders such as Sheldon and Angel. We also have a guy such as Tonye that can constantly alter or block shots throughout a game. However, as a team the defense still needs to be improved. Our team defense has not caused us a loss yet, but in ACC & tournament play the current level of defense will heavily hinder the team.

Man to man: We struggle with pick and rolls and help defense. Our players are still slow reacting to ball movement and dribble penetration. We need to rotate faster and contest everything. With 1 on 1 situations, our perimeter players defend relatively well and create turnovers. Angel is always playing the passing lane, which has led to his abundance of steals.

Zone: We have shown three different zone looks this year. We have gone to a 2-3, 3-2/3-2 matchup, and a box & 1. The box & 1 zone worked perfectly and stagnated the opponent’s offense. We went to a 3-2 vs. both Akron and Charlotte. I believe it was a 3-2 matchup, but could not fully tell since we moved in and out of the zone. Against Akron, we had problems with a 4 out 1 in look that they ran. Our big at the bottom of the 3-2 never shaded over and they were able to disrupt our zone with this offense and get easy looks. They did not capitalize on a lot of their opportunities, but that does not dismiss the area of concern. Against Charlotte they ran a lot of swing throughs with their zone offense. In a few instances, our guard on the side of the 3-2 never dropped down to the corner fast enough and the guard at the top of the key never called for a bump over in order to defend the corner three.

Our great play has elevated us to #17 in the AP poll. What now? In our next 9 games, there will be three major tests for the ‘Canes: Illinois, Providence, and Virginia. Usually at this point of the article Dan E. would ask the readers if they are scared or if they are excited. It is hard to ask that here because this man as our leader. 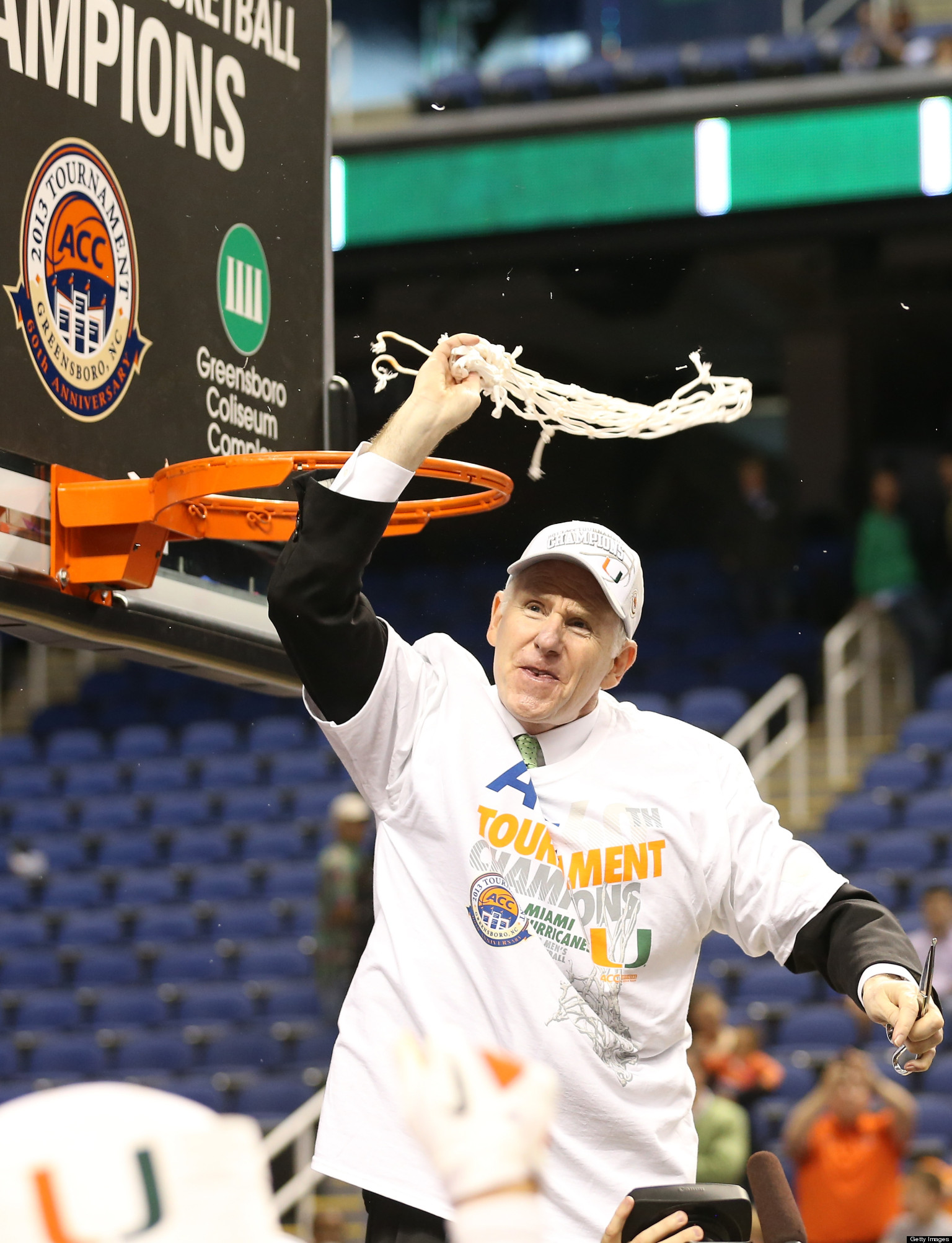 View as thread
Superb write-up and right on with the assessment of this team, the good and the bad, oh you had to bring up football and make it he ugly as well. Appreciate your work and look forward to this season.
Great writeup, thanks Kyle.

Love me some Coach L.
This is great. Thank you. Would love more talk on this basketball team moving forward
This team's only going to get better. Can't wait to see what they can accomplish this year
Cant wait for the Illinois and UVA games.
Its my impression that we have played better defense in zone than man-to-man.

Jakiri has trouble making easy shots around the basket. He has good hands and catches the ball well for a big man. He is also a good passer. I like him taking the mid-range jumper. He has to stay out of foul trouble.

timujian said:
Its my impression that we have played better defense in zone than man-to-man.

Jakiri has trouble making easy shots around the basket. He has good hands and catches the ball well for a big man. He is also a good passer. I like him taking the mid-range jumper. He has to stay out of foul trouble.
Click to expand...

He had a really nice move by pump faking to draw the AND1 against Charolette.

I prefer us playing zone to man too
Sherman, Thomas and Palmer are nice additions to the team. Good offensively but I want to see better d than the game against S. Alabama.

Last seasons D was strictly zone, plus Coach L really tried to run the clock down to limit the opposing teams possessions. That really helped the team. With better offensive punch they are not holding on to the ball as long, hence there will be a lot more possessions to defend this season.

On the plus side, Coach L has some late game scoring to win games. Last season was a struggle to score late.
Last edited: Nov 29, 2014
Just shows what good coaching can accomplish.

Miami04 said:
Cant wait for the Illinois and UVA games.
Click to expand...