The More You Know...About North Carolina

The More You Know...About North Carolina

Dan E. Dangerously
Oct 31, 2014
Miami takes on UNC this weekend with the Coastal Division still up for grabs. Lets see what they're all about. 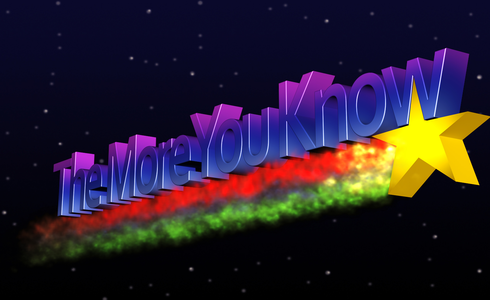 It's been over a week since the Hurricanes blew the doors off of Virginia Tech in Blacksburg. It still feels pretty good. UNC brings a different kind of threat though. They have a quarterback capable of completing a forward pass, and receivers that can do something once they've caught it. They average 296 ypg through the air, which makes them the 21st in the nation. Despite being 86th in rushing (146.8 ypg), they are still 20th in scoring offense, averaging 37.4 ppg. Of the teams on our schedule, only Florida State (18th) and Nebraska (12th) have put up more points. They'll score on us.

The UNC defense is a joke. It's kinda like their African-American Studies program...non-existent. They AVERAGE giving up 512 yards in each game. Even Mark D'Onofrio laughs at that. As the 125th team in scoring defense (41.3 ppg), only Texas Tech, Georgia State, and SMU have been worse. They are 109th against the run, giving up over 210 yards on the ground each week. Somehow, they are even worse against the pass. The 302 yards they give up each game makes them 119th out 128 teams. The injuries to our offensive line will cause some major shuffling, but we should hang 50 on these guys. Expect Duke to go crazy.

Special Teams for them is a mixed bag. They're 51st in kick return yardage, mostly because they've gotten so many opportunities from all the points they've given up. Then they're 114th in punt returns. Conversely their punt and kickoff coverage units are exceptional, ranking 15th and 9th respectively. We haven't had many big plays in this phase of the game so that probably wont change this week.

1. Where they are in the standings/rankings: 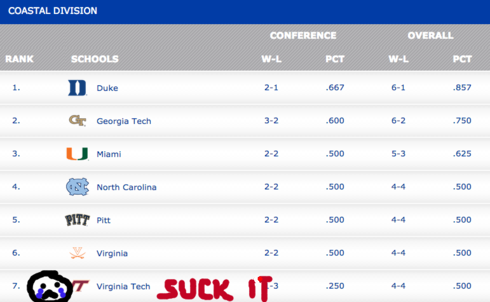 LOL at Virginia Tech. Of our 4 remaining games, 3 are to teams with a record worse than ours. We still need some help though in getting ahead of both Georgia Tech and Duke. Statements like that last sentence, and the leaves turning from green to auburn, are the best ways to tell it's the fall. They both seem to happen every November. The Heels are coming off a 28-27 win over Virginia in Charlottesville. Here's what UVA people are saying about them:

From: Streaking The Lawn


Drew Goodman said:
...Like I pointed out above, the defense was put in awful positions by the offense all day, and did its job for the most part. Having said that, Virginia gave up way too many big plays on Saturday, as UNC averaged 46.5 yards per scoring play.

Then there was the onside-kick… Did the coaching staff learn anything from playing against Larry Fedora coached teams for the past five years? When he was at Southern Miss, Fedora called a fake-punt that mystified the Virginia special teams, and led to a big gain for a first down. On Saturday, the Wahoos were bedeviled by Fedora again on special teams, when Carolina recovered a late on-side kick. Usually a team that is winning late in the ball game does not attempt the risky kick, but Fedora said that the play was there all day, and he picked the right time to take advantage. The Cavalier blockers have had a tendency to retreat a bit early on kickoffs, and it finally caught up with them in the worst way....
Click to expand...

Hopefully our special teams coach has our guys prepared for tomfoolery such as this.


I said:
...Miami takes over with 4:11 left on the clock. Miami runs it down UNC's throat. The first 2 plays go to Crawford and each one picks up 6 yards. Crawford needs a break now. Clements comes in and goes 13 yards, then 14 yards on consecutive plays to get us to midfield. Crawford checks back in and carries it 2 more times to set up 3rd and 2. UNC calls a timeout with 53 seconds left because they know we're bleeding the clock. Crawford gets the 1st down on the next play by running over some guy and picking up another 5 yards. Then Morris sees Waters open down the sideline and guns it to him for a gain of 17 yards. 2 plays later Morris goes to Hurns for pick up of 9 before going out of bounds at the 3 yard line. On the next play Diamond Dallas Crawford puts the Diamond Cutter on UNC, their fans, and Zero Dark Thursday by barreling into the endzone for the go ahead touchdown with only 16 seconds remaining. 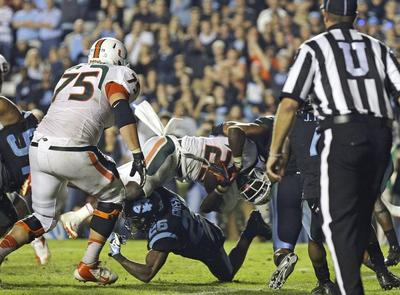 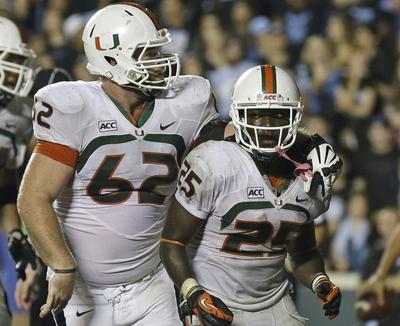 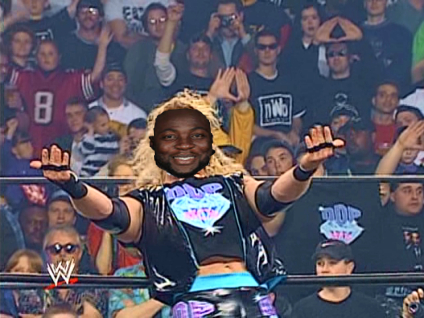 BANG!! It got reviewed and upheld. 27-23 UM. Morris had tears in his eyes on the sideline after that drive. He had a rough night, but he led a 13 play, 90 yard drive when it mattered.

UNC fans were jammed up: 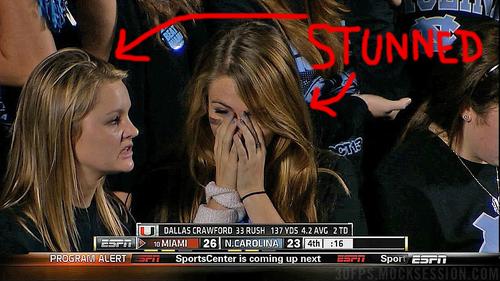 Clinton Portis on the other hand was pumped:

Crawford was so huge that game after Duke went down with an injury in the 1st quarter. Morris threw roughly 9,000 interceptions that night and the coaches had zero faith in him to throw the ball. We ran the ball 11 out of 13 plays during that last drive. 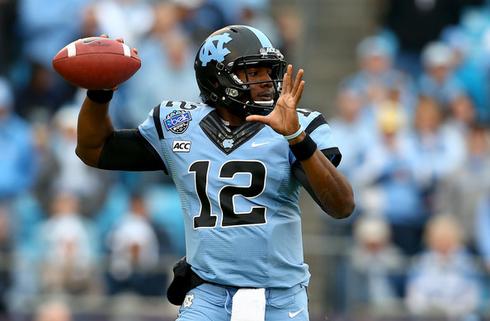 By leading his team in both passing yards (2,035) and rushing yards (497), Williams accounts for over 70% of his team's total offense. His 17 passing touchdowns and 5 rushing touchdowns lead the team, as well as accounting for 57% of Carolina's scoring. What I'm trying to say is Williams is basically their whole team. You might remember him from the last recruiting cycle of the Shannon regime. The Charlotte native gave the impression he had interest in Miami early on, but an early commitment by Teddy Bridgewater basically ended everything. After Golden came on board Teddy bailed on us and Williams had already moved on. Recruiting sucks. Here are some highlights of him accounting for 5 touchdowns a few weeks ago against Georgia Tech:

If he doesn't have a field day I'd be shocked.


4. Player that will score against us: 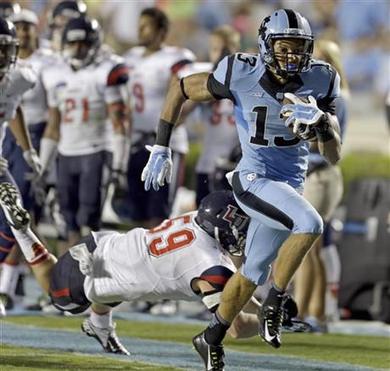 UNC does a pretty good job of spreading the ball around, but Hollins has been the big play threat this year. He leads the team in both receiving yards (555) and touchdowns (7) through 8 games. He also averages over 21 yards per grab, which puts him in 9th place in the nation (Phillip Dorsett is #1 with 31.39 per catch). He actually started out as a walk-on and became a team captain for special teams as a freshman. This year he's getting a chance to play on offense and he's producing for them. Here's a video about him that UNC put together:


And this was him jumping over some guy on 4th down to score a touchdown:

I can already see this guy in my mind jumping, and outfighting just about every DB on our team to make some big catch.


5. Person that will piss you off: 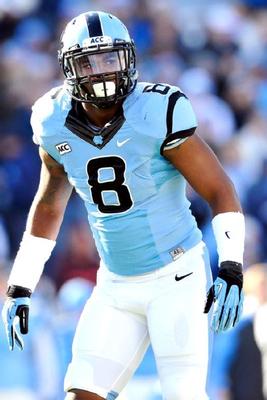 No real reason to hate him other than the fact that he has a stupid name. He's in a 3-way tie for 2nd on their team in sacks with 2...2. Also, he picked off Morris on that comically bad screen play where the ball doinked off of Seantrel Henderson's head.

Their defense sucks so it's whatever. 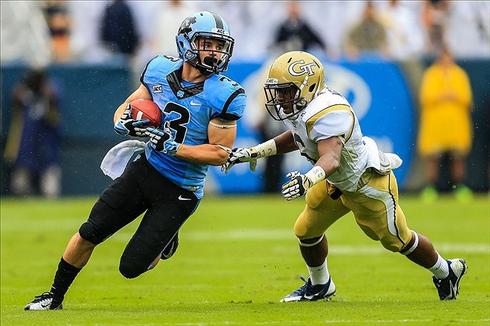 This West Virginia native desperately wanted to play for the Mountaineers since he was a little boy. WVU never offered, so he took his talents to Chapel Hill. All he did last year is tie the NCAA record for punt returns in a single season (5). Those 5 punt returns also broke the CAREER record for UNC. Not bad for a freshman. Because of this he made the all-acc 1st team, and numerous all-american lists for his special teams play. Now he has a more expanded role playing offense, leading the team in receptions with 35. Here are some highlights from his freshman season:

UNC isn't as good returning kicks and punts this year, but we've been underwhelming enough with our coverage units that if this guy runs out there to field a kick, we could be in trouble.


7. If North Carolina was a character from a Brendan Fraser movie, they would be: 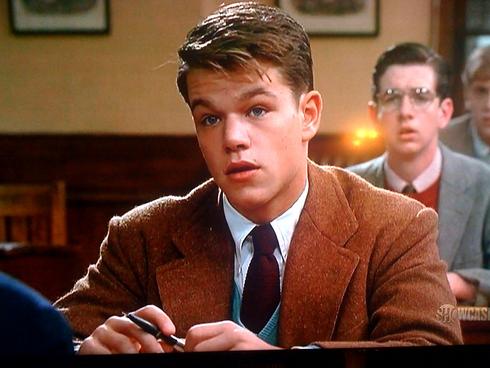 What a smarmy pack of douche-bags and ass-hats. UNC was part of a failed Tobacco Road cabal that was intent on keeping us out of the ACC about 11 or 12 years ago. They felt our addition to the league would tarnish their pristine academic reputations. UNC fans were also some of the most mouthy of our conference foes when it came to our own NCAA nonsense, which was pretty hilarious considering they had just gotten over their stuff that happened involving John Blake. So when it came to light that they were running an immense cheating scandal where athletes took fictitious classes...well...I find that amusing. It's pretty easy to hate people that try to portray themselves as honest and trustworthy when in fact, they are corrupt assholes.


8. Official Internet meme for this game: 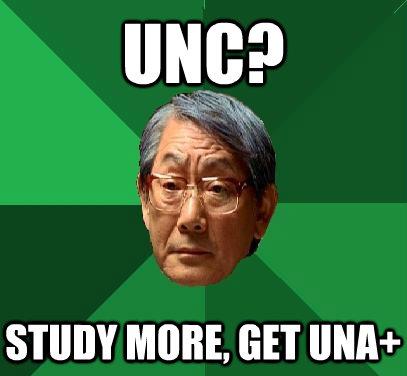 View as thread
Love it! Mack Hollins gonna dishrag our sorry safeties. I don't think we have an answer for him. I expect to win tho.
Thanks Dan. Good stuff as always!

killed it with this 1
12:30 PM .....Let the beatings begin!
Living in the Tar Heel state I really like this one "The UNC defense is a joke. It's kinda like their African-American Studies program...non-existent."
Heck the UNC scandal was on the first page of the LA Times Sports Page last week. They are roaring for the death penalty for both FB and BB and calling for the removal of their NCAAB titles.

By leading his team in both passing yards (2,035) and rushing yards (497), Williams accounts for over 70% of his team's total offense. His 17 passing touchdowns and 5 rushing touchdowns lead the team, as well as accounting for 57% of Carolina's scoring. What I'm trying to say is Williams is basically their whole team. You might remember him from the last recruiting cycle of the Shannon regime. The Charlotte native gave the impression he had interest in Miami early on, but an early commitment by Teddy Bridgewater basically ended everything. After Golden came on board Teddy bailed on us and Williams had already moved on. Recruiting sucks. Here are some highlights of him accounting for 5 touchdowns a few weeks ago against Georgia Tech:
Click to expand...

I wonder if this is why they brought in Rosier? Not for Marquise specifically, but for all the spread guys/teams like him. With Rosier UM has a good approximation for all these guys/teams in practice. I could never understand bringing him in until now. Plus as a bonus maybe he turns out to be a good QB.
Dallas getting to the end zone on that run last year was boss. LMAO at the VT 'suck it' scribble on the coastal graphic. Great stuff.
Awesome stuff as usual. I was at the game last year and I don't see Kayaa throwing 9000 interceptions this year. Steady diet of duke, and if the defense can show a pulse we win by a couple touchdowns. Keep their O off the field.. or get them off the field I don't care which.
Always genius... Thanks for the effort.
Great stuff as usual Dan. This is the only pre-game hype (or reality check) that really covers Canes fan bases. The past two seasons it has been all the info I need prior to the game. Cheers, Danno, this buds for you.
There's some hot fire in that write up.

Good ****, Dan E.
Great as usual, Dan. We're gonna fck that defense like a teacher.
When I read about how NCs defense sucks it reminds me how our defense has sucked….and then I read how NCs offense can score…..sooooo…anxiety building.

PODCAST: What’s next after Texas A&M and Middle Tennessee preview

The Calm After The Storm