LuCane
Feb 19, 2019
We all know the season will turn on a few key positions. Namely, QB, the emergence of a reliable LT, whether someone makes the leap at DT and who takes leadership of the Safety position.

However, there are some subtle positions this upcoming year that will make a 1-2 game difference in terms of W/L. One, because of depth. Injuries are inevitable; let's just hope they're minimal. Two, because these are positions that get important snaps during games and we can't afford a heavy dropoff.

3rd DE - Depending on who wins the SDE role or what they decide to do with it (hopefully, leave Garvin over at WDE), this could be either Hill (if he arrives) or Rousseau. Either way, it's a critical position because it'll get upward of 30 snaps per game.

Swing OTackle - Another position of scary need. My hope is for John Campbell to play behind Kennedy and Scaife. For those who got to watch him practice, he supposedly wasn't that far away in his first year. If he can serve as a swing tackle, he'd give us much needed depth.

Slot - I can imagine Enos using Jeff Thomas all over the field. Thomas should play both inside and outside because he can open up the field when placed outside, but also consistently win if given option routes and such inside. With the groundbreaking emergence of the concept of motion being introduced into the offense, a guy like Mark Pope can potentially do well at this spot and be moved around the field to avoid bump.

2nd DT - This one is huge. It's a wild card right now. Bethel has been there, but if we're going to be really good, and we accept no one (even a blooming Nesta) is going to truly replace what a 23 year old Gerald Willis provided, we need the 2nd and 3rd DTs to chip in here. The ideal situation is Jon Ford takes a massive leap. There are doubts among observers. We shall see.

Nickel - Blades? Bandy sliding inside for specific packages? A Safety? More Striker? This position is critical to continuing last year's surprising climb to the top of the 3rd down conversion statistical rankings.

View as thread
that swing OT position scares the hell out of me right now. 2nd DT too.
Nnorka should be the 2nd DT
I'm not even sold on Kennedy to begin with so yeah swing OT is a problem if it gets to that point.
Good stuff, Lu. An improvement in the punting game will help too.

RVACane said:
Good stuff, Lu. An improvement in the punting game will help too.
Click to expand...

I dont want to jinx it, but can it really ever be worse than what we saw last year? It was actually unbelievable. We punted the ball worse than some High Schools.
After QB, it's all about the line for me. The tackle spot on both sides of the ball worry me. We often have injuries there, and we have zero proven depth to begin with.


LuCane said:
I dont want to jinx it, but can it really ever be worse than what we saw last year? It was actually unbelievable. We punted the ball worse than some High Schools.
Click to expand...

I now we love the Aussie. But he only averaged 38 in Juco in 2017. That's not better than Feagles. He took a year off to improve his technique, correct? Hope he has gotten it up to mid to high 40s. That's what he was punting in his vids. Game time though?
Can see it already...


WE DONT NEED EXPLOSIVE PLAYS
Of the sleepers: Zelontae Hillery, John Campbell, Mark Pope, Jeremiah Payton on the offensive side and DJ Ivey, Jordan Miller, Jahfari Harvey and Gurvan Hall are my guys to watch this spring.

I think all of those guys could end up playing a big role next year if they step up the way I expect them to.
Agree 100% Lu. I'll add:

Center - We need Gaynor to stay healthy & a have huge season for us, it'll be extremely important we keep him healthy all year, because as of now we really don't have a backup C beside TF Jakai Clark who won't be on campus until Fall.

LG - I'm expecting Cleveland Reed to win the LG job, he's a big strong kid with NFL caliber upside, but we have little depth at that spot & unless we hit the portal for another GT we need him healthy all year as well.

FS - Who's it gonna be Bubba or Gurvan? I know I'm the only one lol but I got Amari Carter winning the SS spot so, that leaves FS open. I got no issue with Bubba at SS & Gurvan at FS as the starters either, my dream wish would be Gurvan & Amari starting at FS & SS, but we'll see what happens come Spring/Fall camp.

I think Garvin sticks at Weak Side & Hill takes the Joe Jackson spot on the Strongside, the 3rd DE will depend on Rousseau's health & how fast he can come back to full recovery. Patchan will get plenty snaps as well & with Harvey being an EE I expect him to have a similar season to Garvin's Frosh year. He'll come in as a 3rd down pass rush specialist & get a few strip sacks. I think Cam Wiliams will redshirt if everybody ahead of him stays healthy.

I'm the President of the John Campbell fan club, not even tryna brag but I was literllay the first person to ever post him on the recruiting board even before he was offered. He's got ideal Tackle size, with great long arms & athletic ability to move, at 310lbs I believe he's the perfect size for what Enos & Barry wants at LT/RT, I think he's the potential OL that will excel the most from being in this new offense under new coaching. We can't rely on George Brown so I think Campbell steps up.

At the Y WR spot I think Enos will mix it up, I think JT4 & KJ will both play Outside Z/X WR spots & Inside Slot depending on the formation, the play call & the look the Defense is giving us. With having multiple speedster WR's in JT4, Pope, Harley & KJ, that gives Enos flexibility to find matchups to exploit all over the field. Hell I would even like to see Hightower or Payton line up in the Slot on certain packages, even great bigger WR's like Larry Fitzgerald has plays where he'll lineup at the Y & catch Defenses off guard going one on one with a Safety or LB.

In my 2019 Depth chart I had Chigozie Nnoruka as the 2nd DT (basically playing 1Tech) & Nesta as the DT1 (3Tech). Bethel could/will probably start ahead of Nesta due to him being a Senior & having the experience, but I really like our DT rotation with Nnoruka, Bethel, Nesta, Ford, Miller & at least 1 of the 3 TF's (Holley/Harrison-Hunte/Blissett) could play their way into some snaps outside of the 4 game TF red limit. I'm expecting all 3 to shirt, but possibly one of them just excels & forces Simpson to give them more snaps.

The CB battle is the one I'm most excited & amped about for Spring/Fall camp. Neither Blades or Ivey shirted last year, Blades played the most & Ivey played some on ST's mostly. I think they both have a great shot at winning that spot opposite of Bandy & whoever isn't named the starter will obviously be the CB3.

I don't see Bandy kickin inside to be the NCB in Nickel or Dime packages, he's our best pure cover corner & while he may not be ideal in size for covering taller WR's I don't see us taking our best CB off the opposing WR1. I definitely think we'll see a lot more 3 Safety/Striker packages in Nickel coverage. This is where the dynamic of having guys like Gurvan, Bubba, Amari, Rome Finley, Derrick Smith & now Gilbert Frierson will come into play.
Fans are going to naturally gravitate towards Hedley the new punter - he’s perfect swagger for the U that’s for sure. I really can’t wait to see him clock someone in a game.

I’m not terribly worried about the 2nd DT, it’s the 3rd and 4th in the rotation that will have to stand up this season in my eyes. Same with the backup T position. Let us pray Campbell had an epiphany moment where it all came to light for him. 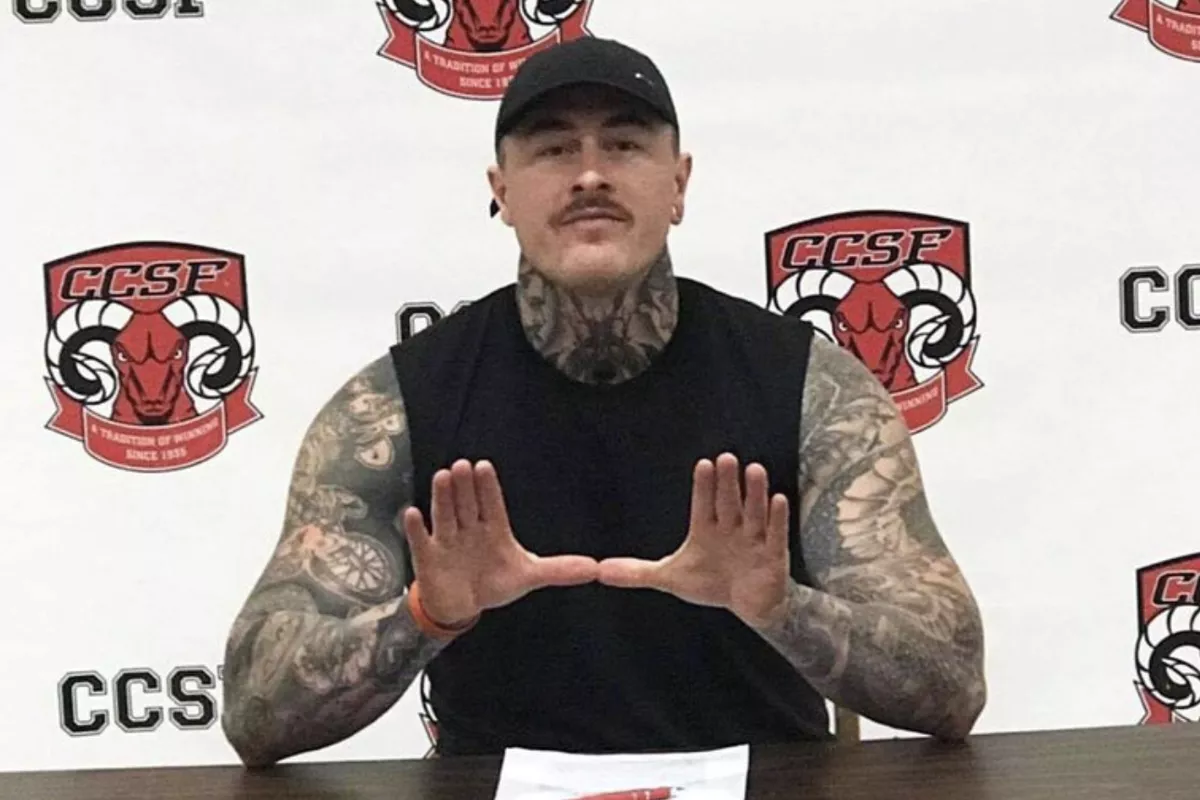 Im not sold on ford yet.
Any info regarding Miller at d-tackle?
Swung ot IMO is by far the most worrysome position for me because we only had 1 ot able to play last season and our only hope ia the guys develop which I believe they can but if they don't the line will fail again badly
PUNTER

CaneDog66 said:
Fans are going to naturally gravitate towards Hedley the new punter - he’s perfect swagger for the U that’s for sure. I really can’t wait to see him clock someone in a game.

I’m not terribly worried about the 2nd DT, it’s the 3rd and 4th in the rotation that will have to stand up this season in my eyes. Same with the backup T position. Let us pray Campbell had an epiphany moment where it all came to light for him.
Click to expand...

Hadley is there to punt. We need him to average more than 39 yards a punt. I don’t care about his tackling abilities. Miami needs to win field position if it wants to win games this year.
3rd DT is worriesome to me. At this point, Ford is a JAG and bethel is barely serviceable. Jmo
Our whole OL depth chart is worrisome. Were still 3 years from building a seniority laden balanced OL

Hurracanes said:
Hadley is there to punt. We need him to average more than 39 yards a punt. I don’t care about his tackling abilities. Miami needs to win field position if it wants to win games this year.
Click to expand...

The bar is pretty low, so he shouldn't have much trouble. Then again, nobody imagined the last guy could muck it up so effectively. We shall see. And yeah, if he can average 40 per punt the offense will immediately be more effective.
You must log in or register to reply here.
Share:
Facebook Twitter Reddit Pinterest Tumblr WhatsApp Email Share Link