Stefan Adams
Jun 23, 2020
2022 Gulliver Prep (FL) 4-star S Travious Lathan has been pursued by the Miami Hurricanes for a few months now, and says that playing in front of the home crowd at the next level is appealing to him.

“It feels great that I have an opportunity to put on for my hometown,” Lathan said. “I can do things that my family never did, like graduate college and do it in my hometown. I’m still in shock that I can rep my hometown and play for the 305.”

Despite NCAA rules that limits the amount of contact schools are allowed to have with 2022 recruits at this point of the calendar, Lathan says he is feeling wanted by Canes so far.

“My relationship with Miami is really good, I’ve stayed in touch with coach (Ephraim) Banda and coach Blake (Baker),” Lathan said. “I feel like there’s a really good connection there.”

The 6-2 190 pound prospect doubles as both a receiver and a safety for Gulliver Prep. While various programs are recruiting him on offense, the UM coaches see Lathan’s future on the stop unit, something he himself agrees with.

“They want me to play defense for them, I just think that’s great and it’s a blessing,” Lathan said of UM. “Right now, it’s striker or safety. I always grew up a receiver, I just recently started playing defense. I can do both, but I feel the defensive way is the best way to go, especially if I want to get drafted.”

Following his UM offer this past December, Lathan was able to visit Miami for their junior day in January, an event he was able to use to get more familiar with the UM staff.

“We started out with watching a video and then we went into the film room and met our position coaches and went over film,” Lathan said of junior day. “It was really good, I talked to coach (Manny) Diaz, coach Banda, and coach Baker a lot more, it was actually my first time meeting coach Baker and coach Diaz. Coach Diaz, he’s a nice guy.”

Lathan was also able to make a trip to Tallahassee this spring for their junior day before the campus shutdowns, and Lathan has been a frequent visitor of the Seminoles’ program in the past.

“I like the tradition at FSU,” Lathan said. “I’ve been to a lot of FSU games, I’ve been to a few of their camps, and it feels like home to me.”

The rising junior athlete also lists Florida, Arizona State, and Oregon (all offered) as other programs he hears from consistently, although Lathan feels like making a quick decision isn’t for him.

“I just want to take it slow and do my homework about each school and the culture,” Lathan said. “Probably next spring after my official visits, I’ll decide, because I don’t want to rush and make a commitment that I’ll regret.”

What does Lathan see as being a key factor in his recruitment?

“The academic part of things is most important, because I want to be a history major in college, so that’s something I’ll be looking into with each school,” Lathan said.

Lathan was used as a weapon on both sides of the ball during his sophomore campaign in 2019, recording 17 catches for 317 yards and 3 TD’s on offense, plus 43 tackles, 4 TFL, 1 INT, and 1 TD on defense for the Raiders.

“My mindset on the field is to always just give it my all and don’t forget my purpose, which is to help my team get the win.”

View as thread
For those who've seen him play is he a better safety or receiver and what do you like about his game?
Hate to say it but he’s a striker recruit.

miamian01 said:
Hate to say it but he’s a striker recruit.
Click to expand...

What's wrong with that?

miamian01 said:
Hate to say it but he’s a striker recruit.
Click to expand...

What’s wrong with that? Lol

as long as he has the speed and length it what helps take the defensive unit to the next level
He’s a natural at WR but his $$$ position is on the defensive side at SAM/Striker/Star or whatever you want to call it.

AHURT12 said:
For those who've seen him play is he a better safety or receiver and what do you like about his game?
Click to expand...

I thought he was heavily interested in FSU.
Someone should tell Lathan that the new noles staff don’t recruit pass that panhandle 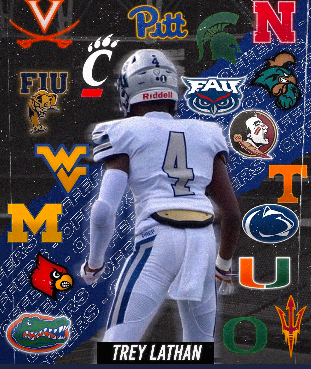 I’m waiting for the first kid to put out all their offers as the finalist.

pacusmc said:
I’m waiting for the first kid to put out all their offers as the finalist.
Click to expand...