Enos, Stubblefield weigh-in on the offense

Enos, Stubblefield weigh-in on the offense

As they have done all spring, the Canes rotated pretty evenly between N’Kosi Perry, Tate Martell, and Jarren Williams and tried to give equal reps. Enos says he’s still looking for more from his QB group.

“All three still pretty much even,” Enos said. “All of them played really, really slow - slow in the huddle, slow at the line of scrimmage. Too indecisive, all three of them at times. The pocket demeanor got them in problems at times and when they played more decisive and their feet were good, they played very well.”

As for the positives, Enos praised the group for taking care of the ball, as well as Perry for his big play ability.

“The one thing the three of them did - didn’t turn the ball over,” Enos said. “N’Kosi was the benefactor of having a couple of big plays, one time negotiated the pocket well, stepped up, slid, eyes downfield and got a big play out of that. But there wasn’t a lot of offensive explosiveness at all on the day.”

The offensive line continues to be a problem area for UM that has been exacerbated due to injuries along a thin front.

"Very inconsistent, the offensive line - we've been shuffling guys in and out of there because of injuries," Enos said. "We had to move Donaldson to center on Saturday, he hadn't played center all spring. He did a tremendous job moving to center for us. But really, there's been no continuity. We're trying to figure out who is a tackle, the starter, who is a two. It's been hard that way, especially against a defense doing as much as they’re doing.

“We had two freshmen playing left tackle in the scrimmage Saturday - they should be getting ready for the senior prom and they’re out there blocking one of the best defenses in the country. At the end of the day, we’ll have an offensive line we’re excited about."

Despite the struggles, Enos isn’t concerned about the state of the offense and sees the unit slowly learning their way in new terrain.

“We’re trying to learn a whole new offense - not worried at all,” Enos said. “The competition will make better players and the cream rises to the top. May be the best man win… It’s frustrating, humbling at times but hopefully we can learn from those adverse situations.”


**One of the issues so far this spring in the WR group has been dropped balls, something that plagued the unit in 2018 as well. New WR coach Taylor Stubblefield has been drilling his guys hard to break down their bad habits and get the receivers to make the easy catches.

“There’s going to be drops,” Stubblefield said. “The frustrating part for me and for our group is hand position on certain catches, when you don’t have your hands out a certain way, you don’t maximize your catch radius.

“Some habits are hard to break – yes, you can be successful catching the ball with poor hand placement. But if you want to be 10 out of 10, an elite ball-catcher, you have to have your hand placement the right way. We’re stressing it. We have guys on the JUGS machine, have to get more guys on the machine. I’m encouraging them to perfect their craft.”

Coming over from Air Force, Stubblefield hasn’t quite worked with the type of raw talent junior WR Jeff Thomas offers, but Miami’s receiver coach is still pushing him to polish up the finer points of the position.

“Jeff has tons of tools, he really does. He’s fast, he’s quick - with our offense, what we do you have to be detailed in what you do and he’s continuing to learn the skill parts the position,” Stubblefield said. “We don’t have an offense where you just run to an area, run to an open spot. You have to understand what you’re attacking, what the defense is trying to do to maximize this offense. We have to continue to work the skill part.”

Sophomore WR Mark Pope had a 52 yard TD reception in the scrimmage and Stubblefield updated his progress.

“He’s very gifted,” Stubblefield said. “He’s fast, he’s quick, catches the ball pretty naturally. The biggest thing is him understanding. Our offense is complex, but it’s very simple once you understand the foundation of it.

“What’s good with him is he’s up for the challenge, is doing some extra things so that he can learn what he needs to learn. We want him to be confident with what he’s doing. In years past, it was a signal. Now, the quarterback has to speak it, we have to hear it, decipher what it means and act accordingly.”

Another standout this spring has been senior WR KJ Osborn, who transferred in from Buffalo in time for spring ball.

“It’s no longer about how many stars he was out of high school, how much promise he has,” Stubblefield said. “This is his last year playing - he wants to be the best he can be.”

Sophomore WR Evidence Njoku has always been known for his intriguing physical gifts, but has been trying to find his footing after tearing his ACL in his freshman season. Stubblefield recognizes Njoku’s potential and keeps on him hard in an effort to unlock his talents.

“I’m going to continue to challenge Evidence. Evidence has a tremendous amount of talent,” Stubblefield said. “We have to make sure that he has a sense of urgency about his development. There are times he wants to be the best and sometimes we have to motivate him to be the best. He’s improving, has been maybe a little banged up, battling back from that. If he comes out with a workman-like mentality, he’ll have a chance.”

View as thread
I cannot fap to this
WRs have to stop just relying on pure talent. It’s time for them to take that game to another level!
Enos:
“We had two freshmen playing left tackle in the scrimmage Saturday - they should be getting ready for the senior prom and they’re out there blocking one of the best defenses in the country. At the end of the day, we’ll have an offensive line we’re excited about."

That last sentence is the best thing I heard in a long time!!! Yes, because it is coming from him.

Man!!! That OL in my opinion will be the difference between greatness and mediocrity next season and forward
OL continues to be the Achilles heel of this team

tinman_96 said:
OL continues to be the Achilles heel of this team
Click to expand...

tinman_96 said:
OL continues to be the Achilles heel of this team
Click to expand...

The good news is that it seems like we have some coaches that aren't going to put up with that **** for longer than they have to...
Enos will scheme around the deficiencies on the OL.
This is change I can believe in
One is certain with Manny, just as the players are held accountable, if any coach doesn't produce, they will be looking for a new job next season... no more Doritos type vacation passes
Hopefully they learn from Osborn. He seems to have the best work ethic of the receivers. He's a veteran in his last go around. These kids need to keep grinding. Then the diamonds will shine!!!

Mr. Dynasty1 said:
WRs have to stop just relying on pure talent. It’s time for them to take that game to another level!
Click to expand...

Number1CanesFan said:
Hopefully they learn from Osborn. He seems to have the best work ethic of the receivers. He's a veteran in his last go around. These kids need to keep grinding. Then the diamonds will shine!!!
Click to expand...

Agreed, they need to see the urgency he's playing with, practicing with. Much like Willis played last year at DT. Hopefully, that mindset spreads to the rest of the receiver room.

caneworld said:
One is certain with Manny, just as the players are held accountable, if any coach doesn't produce, they will be looking for a new job next season... no more Doritos type vacation passes
Click to expand...

Doubt it...Banda gets his sh1t pushed in backwards on the recruiting trail every year and is still here

caneinorlando said:
And quite frankly (besides 2001)...always has been...
Click to expand...

+100
That's what the morons on this forum don't understand. They think that even in our heyday we had O-lines that were elite. The truth is MIA was able to championships despite the O-line never being one of the strengths of the team. Even an O-line that is solid to good will be enough to contend.

SinisterCane said:
Doubt it...Banda gets his sh1t pushed in backwards on the recruiting trail every year and is still here
Click to expand...

247sports.com
The OL is a dumpster fire, QB's are slow and indecisive and WRs continue to drop everything. No wonder Manny is playing the scrimmage in Jupter and doesn't want anybody to see it
How important is the OL to a "spread" offense? Read this and weep: 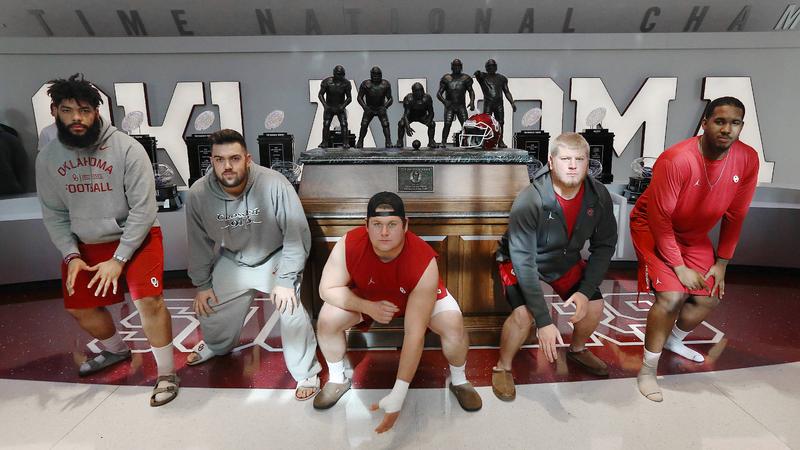 Largely responsible for the Sooners' unprecedented offensive efficiency this season, Oklahoma's offensive line unit was named the most outstanding in college football

Crown Banda as the Preseason King of recruiting..................until national signing day
The same problems coach richt & coach dugans had with jt4 is the same thing coach enos and stubblefield are having,let's see how they deal with em. Everybody knows the talent is their but jt4 since he's been here is not discipline in his routes, as a True freshman, its a lil understandable but he gets lazy mentally if its not a go route or he'll just make it a go route, and he keeps jacking up the spacing for the other routes.

Go back to his freshman season, against V-tech, of course he wasnt the 1st option, but rosier came back to em about on his 3rd read, and jt4 ran one of the poorest square in's and the ball got picked, against lsu last year in the clinch, he let the db smother him like that on that comeback route, he should easily be able to have db's on skates and be wide open on those type routes. And with the young qb's, it hurts their development as well.

But this offense is going to be alright, coach enos like coach richt seems to be an aggressive play caller, we will see if he can coach around alot of the individual growing parts. The good news is, the 3 headed tightend attack we have is going to open up alot of things. We already have a better run blocking o-line when healthy than last years group!
You must log in or register to reply here.
Share:
Facebook Twitter Reddit Pinterest Tumblr WhatsApp Email Share Link