Stefan Adams
Apr 14, 2022
2023 Jones (FL) 4-star DE/LB Malik Bryant has been one of the Miami Hurricanes' top targets on the defensive side of the ball thus far this cycle, and today he was able to take in a UM spring practice for the first time with the new staff.

The 6'2" 235 pound athlete got to meet new DC Kevin Steele and LB coach Charlie Strong on the visit, his first to Coral Gables since January's Elite Prospect Day.

"They are basically saying that it's going to be a turnaround, and that I'll see it starting this season," Bryant said of Steele and Strong. "They're trying to get it back to how it usually is, the old Miami."

In Steele's scheme, Bryant is seen as a hybrid defensive end/linebacker, and he mentioned he was paying a lot attention to what DL coach Joe Salave'a was doing during practice.

"I really like his mentality, how he attacks practice, the drills he teaches, his technique," Bryant said of Salave'a. "We have a pretty good relationship."

While the Jones HS star has built a strong bond with Salave'a, Bryant says he is getting the full-court press from the whole UM staff, including HC Mario Cristobal.

With the new staff in place, Bryant sees Miami as a school that's on an upward trajectory, and he has the Canes high in his picture.

"Really it's about the atmosphere there, I can see what they're trying to build," Bryant said of UM. "It's a program on the rise right now, just trying to get it back to the old ways."

Along with UM in Bryant's top group sits Georgia, Alabama, Florida, and USC. He expects each of the five to get an official visit and is tentatively planning to head to Miami for his OV in June, but does not yet have a set date as he tries to parse out the pros and cons of his finalists.

"Of course I would have to fit into the scheme and all of those type of details, but I feel like what it's really gonna come down to is the relationships within the program that I have with the coaches and everyone in the program," Bryant said of his decision-making process.

With a set commitment date of July 23rd, Bryant is currently making the rounds to each school for unofficial visits; while he has yet to see USC, Bryant has made recent trips to Alabama and UF the past two weekends, and spoke on his visit to the Gators.

"They got a new staff. I got to see where coach (Patrick) Toney, the DC, where I fit into his scheme," Bryant said of UF. "He drew up a lot of plays and showed me how I could be a big playmaker in their defense. So I really enjoyed visiting Florida."

As his recruitment continues to heat up, Bryant has made sure to stay focused on his upcoming senior season, where he will return to Jones after a two-year stint at IMG Academy.

"I've been working on my quick-twitch speed, my first step, getting off that line faster. Just staying healthy pretty much," Bryant said. "My mindset is just to attack every play, every drive. But I'd say I model my game after guys like Von Miller, DeMarcus Ware. I'd say it's the speed, that first step off the edge, the quickness, the hands all correlate to my game as well."

View as thread
Would start day 1 here.
Sounds like a Cane to me. He said it’s going to come down to relationships with the head coach and everyone in the program. He referenced how he has a good relationship with Mario and everyone else

I can see y this kid is ranked as a top 2-3 LB in the nation. This looks like a Miami Caliber LB; good instincts, great closing speed, great athlete. Good size, too, both height & frame.
Sheesh....going to be a tough recruitment. Really need him to OV everyone before his commitment in July.

That will eliminate USC and imo give us and UF the advantage. This kid will be attending games this fall regardless of who gets the July commitment
Him and Jayden Wayne are Bama vs Us.

I want them both badly because of this.

He could graduate early and start today too
Thought he was a 5star?

They docked him a star for visiting UM and liking it. 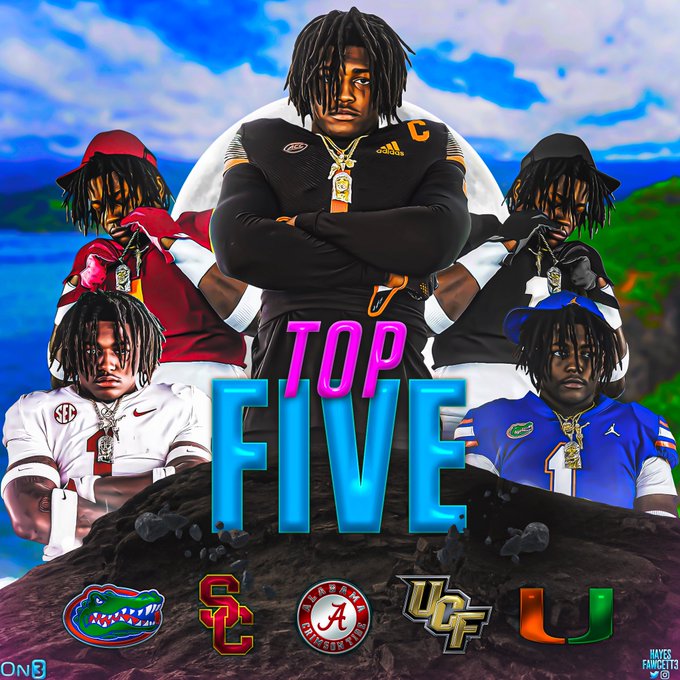 Canes jersey in the middle, jussayin.
“Top Five” is in Miami Nights colors….CANE LOCK
He picked his worst picture for the Gators uni

CANE LOCK
UCF? Lol.
UCF top 5, no FSU in sight. This amuses me.
What a pull this would be. Bama and the gator are all-in for this kid.
Now this guy is a mega target a Micah Parsons type skill set

I was scrolling the top 50 Florida recruits on 247 and barely saw fsu lol
It’s Us vs Bama. I think he picks Us in July with intentions to watch how successful we are this coming season. If he doesn’t like what he sees he’ll decommit and go to Bama.

I think Jayden Wayne does the opposite. If he commits early he’ll choose Bama, but if we have a successful season it’ll give Mario the juice to flip him from Saban.
Yeah odd to see a player of his caliber with UCF in his Top 5, that’s gotta suck for the Semenholes

. All in all I think he really likes Steele and his defensive scheme to utilize him the best. Can easily see Bryant fitting in well in our defense, hopefully the few plays the UF DC drew up showed they won’t showcase him like we will and 7/23 will be a glorious day for the Canes.
You must log in or register to reply here.
Share:
Facebook Twitter Reddit Pinterest Tumblr WhatsApp Email Share Link