Canes Legacy
Dec 29, 2020
We did a survey last week at the end of the early signing period to get an idea of what the fans thought about the class (so far). We know that the numbers on these types of things will always shade towards the positive, especially in a stronger class like this, but still it's interesting to look at the results.


How would you rate the class so far?
Winner: 9/10 (43.7%)
The great majority of the fans are very happy with the class, with 84% of responders choosing 8 or 9. No one voted less than a 6, which is surprising because it was an open twitter and message board vote and those are an easy troll target.

Who is the BEST recruit in the 2021 Class?
Winner: Leonard Taylor (57.2%)
2nd place: James Williams (33.1%)
LT won big, but it was really a story of two, with those guys taking over 90% of the vote. The next highest total was only 6 votes for Jake Garcia, so it tells you how positive fans are about those two defensive studs.

Who is the most UNDERRATED recruit in the class?
Winner: Chase Smith (17.4%)
Chase won those vote with a handful of others (Troutman, Brashard, and Malik Curtis rounded out the top 4) getting around 10%. Chase's unique skillset and low key recruitment played a big factor.

Who is your PERSONAL FAVORITE recruit in the class?
Winner: James Williams (31.25)
People love James Williams, and it's no surprise if you remember the way that the fans reacted after he first committed.

What members of the class will be starting (or a consistently contributing backup, like Chaney/Flagg this year) by the end of the 2021 season?
Taylor, Williams, and Andres are the top vote getters here, and there's still some love for the receivers and Malik. No doubt Andres is the man now, and the others are definitely going to get a lot of PT. 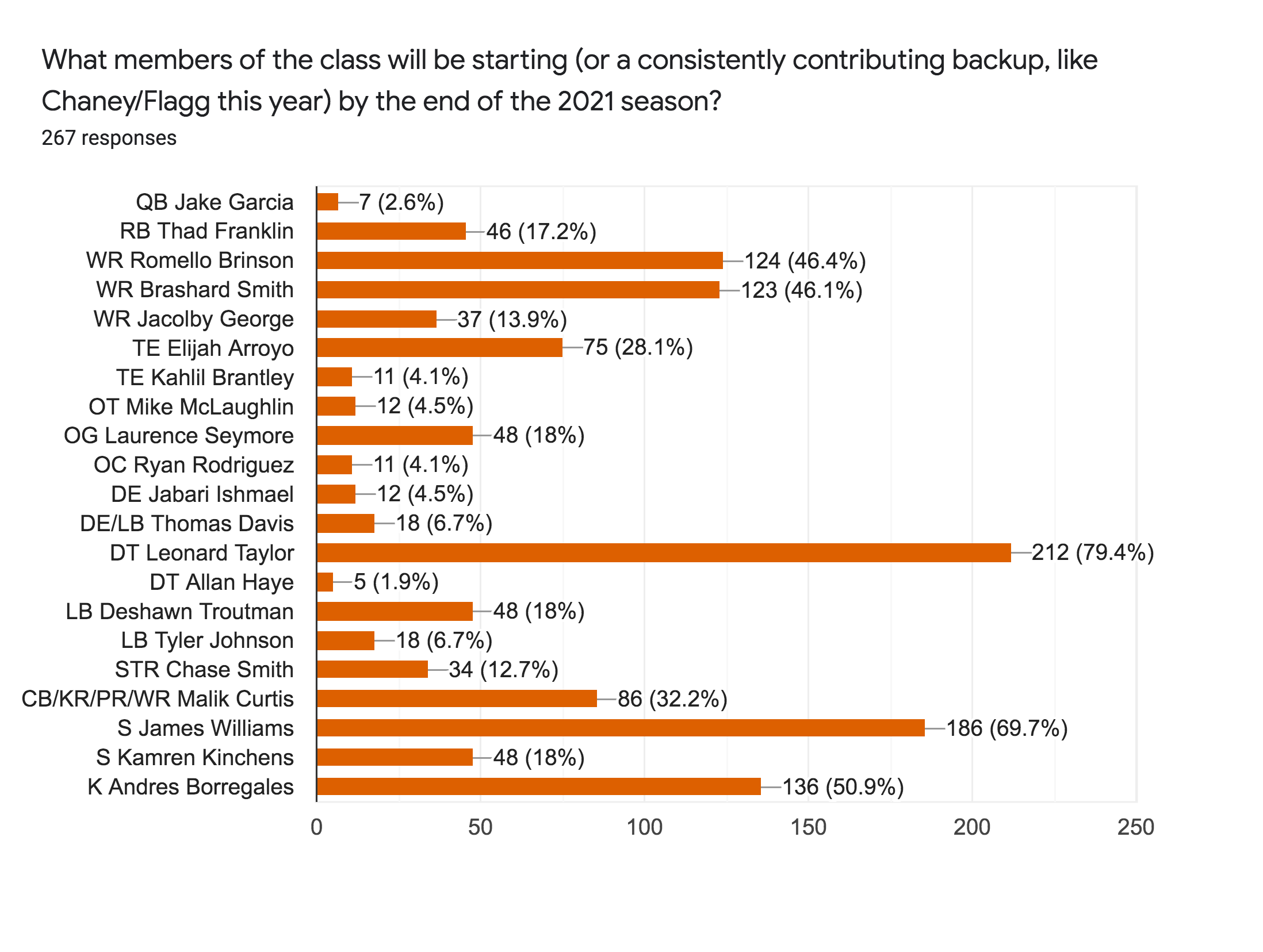 What members of the class will be FIRST ROUND DRAFT PICKS when they elect to go to the NFL?
Taylor and Williams are the stars of the show again, with fans showing a ton of confidence in their ability to star at the college level before making the jump. 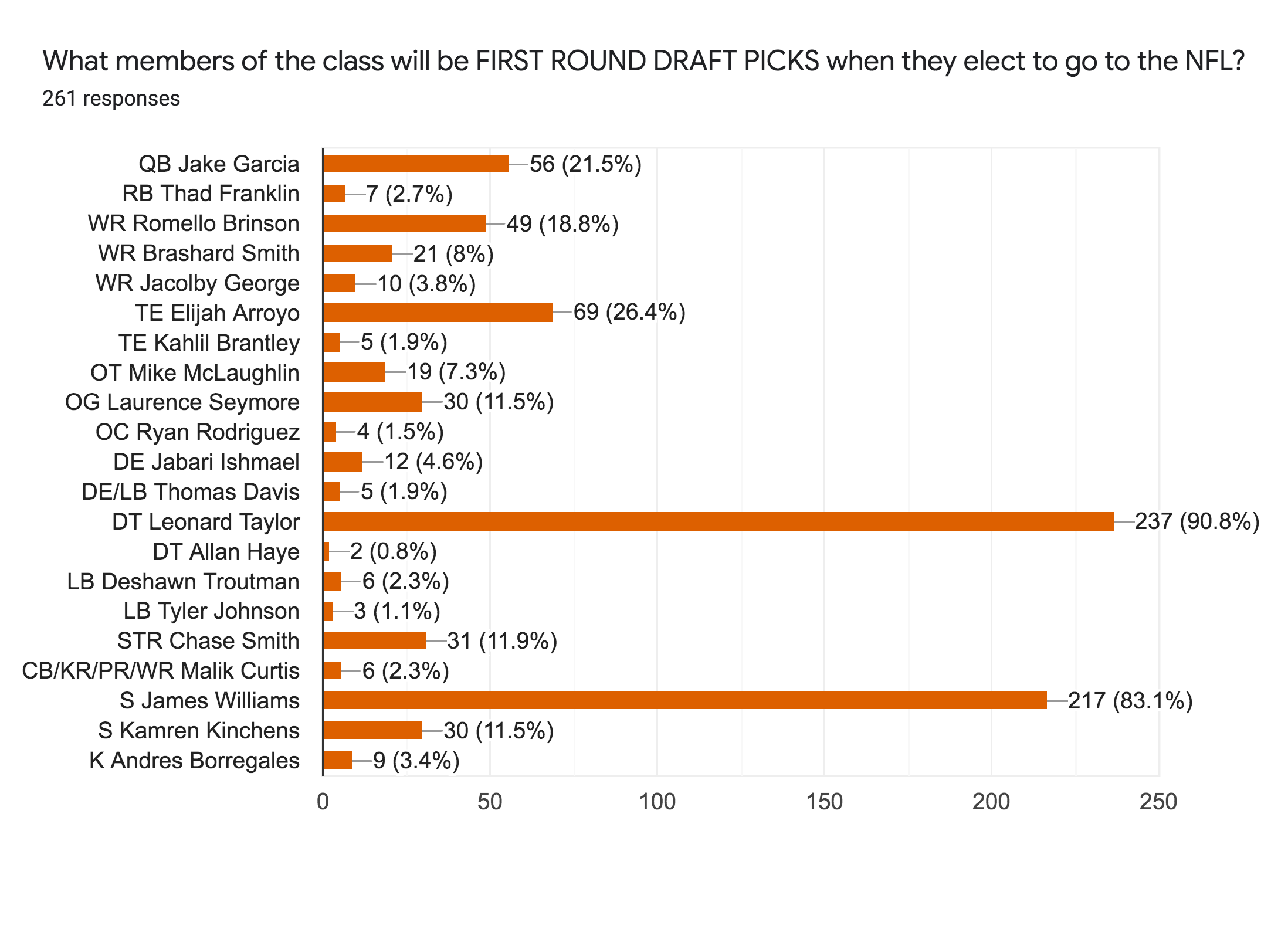 Who was the biggest BIG FISH MISS of the class?
Winner: Jason Marshall (77.2%)
The biggest surprise is that more people didn't vote for Marshall.

Who was the biggest smaller fish miss (or mistake in not going after) of the class?
Winner: Ja'den McBurrows (32.2%)
The two corners took the top spots here, too, as you see the theme developing here. Payton and Barber were other late interests that popped up here.

What position group do we need to address the most before February signing period?
Winner: Cornerback (97.8%)
262 out of 268 votes... Yep.

OK, now that you voted for CB in the previous question, what OTHER position do we need to address for the February signing period?
Winner: Linebacker (50.4%)
Hopefully the desire for fans to add another LB gets answered with some good news in a few days. OT and DE finished 2nd and 3rd, correlating with the Payton/Barber decisions.

In your opinion, what assistant coach is our best recruiter?
Winner: Ephraim Banda (44%)
We'll see what happens over the next few days, but Banda has definitely a split in positivity among the fanbase. Stephen Field finished second while working all over the place for the recruiting efforts.

Player Prognostication: QB Jake Garcia
Winner: All Conference (61.8%)
Lot of positivity about Jake's future after his whirlwind recruitment. If he's an All ACC QB, we're in great shape for the future.

Player Prognostication: RB Thad Franklin
Winner: All Conference (45.5%)
Big split between those who think he'll get those major honors as a collegiate or just be a quality starter. He'll definitely have a big role here for his time as a Cane.

Player Prognostication: WR Romello Brinson
Winner: All Conference (54.5%)
We're seeing a trend of optimism here. Also, Mello's 22.6% of people who think he can hit AA status is top 5 in the class.

Player Prognostication: WR Brashard Smith
Winner: All Conference (60.2%)
Less people voted for him as a future AA, but over 80% think he'll at least be All Conference, which says a lot (higher % than even Romello).

Player Prognostication: WR Jacolby George
Winner: Starter (54.5%)
Most people anticipate George being a late career starter at UM, but he'll no doubt have an opportunity to play alongside his classmates with their complementary skillsets.

Player Prognostication: TE Elijah Arroyo
Winner: All Conference (40.6%)
Arroyo's 76% of All Conference/American voting may even be underrating his skillset.

Player Prognostication: TE Kahlil Brantley
Winner: Starter (49.1%)
With how we use TEs, it's no doubt a guy like Brantley will have a chance to get on the field and compete in different spots for the Canes (like Herndon did with Njoku around).

Player Prognostication: OT Michael McLaughlin
Winner: Starter (55.5%)
Miami building Tackle depth? What is this sorcery? McLaughlin is definitely a guy who will continue to grow and develop. Having a pro body type is a huge positive for us.

Player Prognostication: OG Laurence Seymore
Winner: All Conference (62.1%)
Big Baby has been locked in for so long, it's easy to forget how good he is. The 73% All ACC/AA voting says a lot about that.

Player Prognostication: OC Ryan Rodriguez
Winner: Starter (48.7%)
Rodriguez has the old school Cane center profile perfectly. Hard to say when his time will come, but he looks like a future starter/leader inside.

Player Prognostication: DE Jabari Ishmael
Winner: Starter (51.5%)
Ishmael fits that Joe Jackson role really well, but it might take some time for him to grow into his body.

Player Prognostication: DE/LB Thomas Davis
Winner: Starter (51.3%)
Maybe the biggest question would be where exactly he fits in on the defense. His versatility may lead to a Trent Harris-like career.

Player Prognostication: DT Leonard Taylor
Winner: All American (88.2%)
People seem to like him. 99.7% think he'll be at least an all conference player.

Player Prognostication: DT Allan Haye
Winner: Starter (49.4%)
Coming in with a guy like Taylor is a lot of pressure, but he'll have a chance to play in a quality young DT unit.

Player Prognostication: LB Deshawn Troutman
Winner: Starter (49.4%)
I wouldn't vote against this kid carving out a role sooner than later. Plays with great instincts and attitude that we need.

Player Prognostication: LB Tyler Johnson
Winner: Starter (51.2%)
The quietest recruitment in history leads some to underrate Tyler, but some think he's one of the pillars of the D class.

Player Prognostication: STR Chase Smith
Winner: All Conference (44.2%)
A pretty diverse vote for Chase because of how hard it is to exactly predict where he'll fit into the defense. Kid is a potential star in the making.

Player Prognostication: CB/KR/PR/WR Malik Curtis
Winner: Starter (40.8%)
If it was just "as a returner," I'm guessing that the numbers would shade higher for receiving honors. He seems like a natural for that spot.

Player Prognostication: S James Williams
Winner: All American (82.8%)
Slightly less hype than Taylor, but the sky is the limit for who will no doubt be one of our long term defensive leaders.

Player Prognostication: S Kamren Kinchens
Winner: All Conference (62.8%)
Kinchens should be the top notch centerfielder we've been missing for a few years now.

Player Prognostication: K Andres Borregales
Winner: All American (50.8%)
His brother was just named a first team All American, but no pressure.

We received 270 total votes from both CIS and Twitter, so thanks to all who contributed!

View as thread
Excellent work, @Canes Legacy! Thanks for putting in the time to do this!
Thank you!
Well done
Nice!!!
This is very well done and an indictment on my time away.
I’m surprised by how few votes Brantley got on the “favorite recruit” question. I get that he wasn’t the biggest fish but dude was the true ambassador of the class.

darius19 said:
I’m surprised by how few votes Brantley got on the “favorite recruit” question. I get that he wasn’t the biggest fish but dude was the true ambassador of the class.
Click to expand...

He got my vote.
How much does Mark Pope weight over or under 125 lbs should have been a bonus question. Other then that great work.

JgDaCane said:
How much does Mark Pope weight over or under 125 lbs should have been a bonus question. Other then that great work.
Click to expand...

We try not to include questions with unanimous answers.

With T-Rob now here gonna be exciting to see what he can do with James Williams, although I see him better suited as an OLB IMO. I really think outside the 5 stars: kinchens, chase, brashard, curtis, arroyo, and davis are gonna be ballers. Absolutely loved all those players on film.
You must log in or register to reply here.
Share:
Facebook Twitter Reddit Pinterest Tumblr WhatsApp Email Share Link