Stefan Adams
Oct 8, 2020
Ahead of what is setting up to be one of college football's biggest games of the year, CIS took a deep-dive and compared both the Miami and Clemson programs. How do the teams match up in key areas of the game, which players were recruited by the other school, and how does the series history shake out? Let's find out.

The Canes are dominating on the ground thus far in 2020 and are 12th in the country rushing the ball with 232.3 ypg. RB Cam’Ron Harris has led the way and is 11th in the country in rushing with 311 yards and 5 TD’s, while showing off plenty of explosion as well (8.2 ypc). QB D’Eriq King (52.3 rushing yards per game) also provides a threat on the ground with his legs and will make the Clemson defense have to account for him on every play.

While Miami’s offensive line looks to have taken a step forward in 2020, this Tigers’ front will likely be their biggest test of the year, as Clemson comes in at 10th nationally in rushing defense allowing a paltry 90 ypg. Without 2019 third team All-ACC selection Xavier Thomas (opted out of season), Clemson brings a young, but highly recruited, defensive line to the table in 2020, as 3 of 4 starters are sophomores or younger. However, the most productive member of the front 4 has yet to start a game, as freshman 5-star recruit Myles Murphy has come off the bench to lead the Tigers’ DL in tackles (16) and lead the team in TFL (5) and sacks (2). A second team All-ACC selection as a true freshman in 2019, impact sophomore DT Tyler Davis (9 TFL, 5.5 sacks in 2019) will return to the lineup vs. UM after missing the past 2 games with a sprained MCL. Consistent rushing yardage might be hard to come by for Miami in this one, but UM also has multiple electric weapons that have shown they only need a sliver of daylight to break big plays.

Clemson hasn’t done a ton of damage on the ground this year and are in the back half of the FBS in rushing (#39 of 74 teams at 161.3 ypg), but they do return one of the nation’s best all-around RB’s in senior Travis Etienne. A player that can break a big play at any time (7.7 career ypc) who was last season’s ACC POY, Etienne was the nation’s 7th leading rusher in 2019 and has amassed 65 total TD’s in his 3+ year career. QB Trevor Lawrence (563 yards, 9 TD’s rushing in 2019) can also churn up yardage on the ground as well if left unattended. Clemson’s dropoff in rushing numbers so far this year can most likely be attributed to a rebuilt offensive line replacing 4 of 5 starters from 2019. This could be the week Clemson’s ground game really breaks out, though, as Miami has struggled stopping the run in 2020 to the tune of allowing 146.7 ypg (41st nationally). That’s been mostly due to inconsistent LB play that is slow to fill gaps, as the UM DL has certainly done their part (14 TFL for the DL through 3 games). With Etienne as one of the nation’s best running backs that can break a game open at any point, the hope is that Miami’s strong DL can consistently get upfield against a questionable Clemson OL and stop Etienne in the backfield before he can get going. That’s easier said than done, though.

UM’s passing offense has shown the ability to be both efficient and explosive at times, coming in at 24th in the country with 266.7 ypg. Miami WR’s have struggled early in the season at various points, but are coming off their best game of the season vs. FSU (17 catches for 180 yards and 2 TD’s combined for receivers). UM’s backs and TE’s have also shown the ability to help make up for the WR’s in the passing game, as TE Brevin Jordan (team-leading 15 receptions, 212 yards, 3 TD’s) looks to be right back in the mix for the Mackey Award, while Harris (9 catches) and Jaylan Knighton (4 catches) have chipped in as well. King has also been one of most efficient passers in the country thus far with a 154.2 rating and 244.3 ypg, completing 66.7% of his throws with 6 TD’s and no turnovers.

They’ll be going up against a Clemson secondary that is 22nd in the country in pass defense at 213 ypg thus far, but is inexperienced (3 of 4 new starters) and has yet to find a standout player in 2020. The Tigers’ expected leader in the defensive backfield was junior CB Derion Kendrick, a preseason first team All-ACC selection. However, he was suspended for Clemson’s opener and hasn’t made much of an impact in two games played (4 tackles, 2 PBU). Clemson’s pass rush can mainly be credited for the success of their pass defense thus far, as they are 2nd in the nation with 13 sacks led by Murphy. On the flip side, UM’s offensive line has been one of the best in the country in keeping King clean (12th nationally at 1.0 sack per game). Something has to give here in the trenches, and the winner of this matchup likely wins the game.

Despite losing expected #1 receiver Justyn Ross before the year with a season-ending spinal injury, this Clemson passing attack led by preseason ACC Player of the Year and Heisman favorite Lawrence has hummed right along with 316 ypg (14th nationally). Lawrence can make any throw to all parts of the field, combines accuracy (73.3% completions in 2020) with a big arm (11.3 ypa), and is blessed with explosive weapons around him. Senior WR Amari Rodgers (team-leading 12 catches, 206 yards, 3 TD’s) profiles as the reliable slot man, sophomore WR Frank Ladson (19.9 ypc in 2020) acts as the emerging big-play threat on the outside, and Etienne (9 catches, 172 yards) can flare out of the backfield to burn a defense.

UM is 28th in the country in passing defense at 230.3 ypg, and although the secondary has allowed too many receivers running free at times in 2020, they’ve been buoyed by a strong pass rush led by Quincy Roche (5.5 TFL, 2 sacks) that is coming off their best game vs. FSU (6 sacks, 13 TFL). The Miami DL needs to take advantage of another inexperienced OL this week and really pressure Lawrence, otherwise you could see him have a field day with this Miami secondary.

Clemson senior punter Will Spiers has a ton of experience and has been the Tigers starting punter since he was a freshman, although he has been a below average performer in that time (40.9 career ypp) and is currently 10th in the ACC in ypp (42.4) in 2020. Clemson junior kicker BT Potter had his struggles (61.9% on FG’s) in his first season as the Tigers’ kicker last year, but has been a perfect 5-5 on FG’s so far in 2020. On the flip side, Miami has two proven and experienced specialists in punter Louis Hedley, who made the Ray Guy Award watchlist (3rd in ACC at 45.8 ypp in 2020), and kicker Jose Borregales, who has been a true difference maker so far (6-6 on FG’s, long of 57). The Canes are still trying to find an answer at returner with Mark Pope’s struggles (2 fumbles lost in 3 games), while the Tigers have two proven explosive options in Rodgers and Etienne at PR, and Lyn-J Dixon has already taken a kick return back 52 yards.

**The Tigers are currently on a two game-winning streak vs. Miami; the longest-ever winning streak in this series was 3 games, something done by Miami (1952-1956).

**The largest margin of victory in this rivalry is 58 points, something done by Clemson when they shutout the Hurricanes in Miami Gardens during the 2015 season, a loss that led to former UM head coach Al Golden’s firing the following day.

**An interesting fact about this series: former UM head coach Randy Shannon actually defeated current Clemson head coach Dabo Swinney by a score of 30-21 during Swinney’s third season at the helm back in 2010; Clemson went on to win 6 games that season. Swinney has not won less than 10 games in a season since, a streak of 9 straight double-digit victory seasons.

**Back in 2017, #7 Miami took on #1 Clemson in the ACC title game for in a spot in the College Football Playoff. The Tigers never trailed and controlled the game the entire way, blowing out the Hurricanes in Charlotte, 38-3. With the win, Clemson went on to the CFP, where they lost in the semifinal game to the eventual national champion, Alabama.

**Miami QB Malik Rosier threw for the least yardage he had all season, passing for just 110 yards and going 11-26 with 0 TD’s and 2 INT while taking 4 sacks. Also of note, Rosier’s top 3 offensive weapons in RB Mark Walton, WR Ahmmon Richards, and TE Christopher Herndon sat out the game with injury.

**On the flip side, Clemson QB Kelly Bryant had one of his best games as a Tiger, going 23-29 for 252 yards and a TD passing to go along with a rushing TD before sitting out the 4th quarter. WR Ray-Ray McCloud led Clemson with 6 catches for 100 yards. 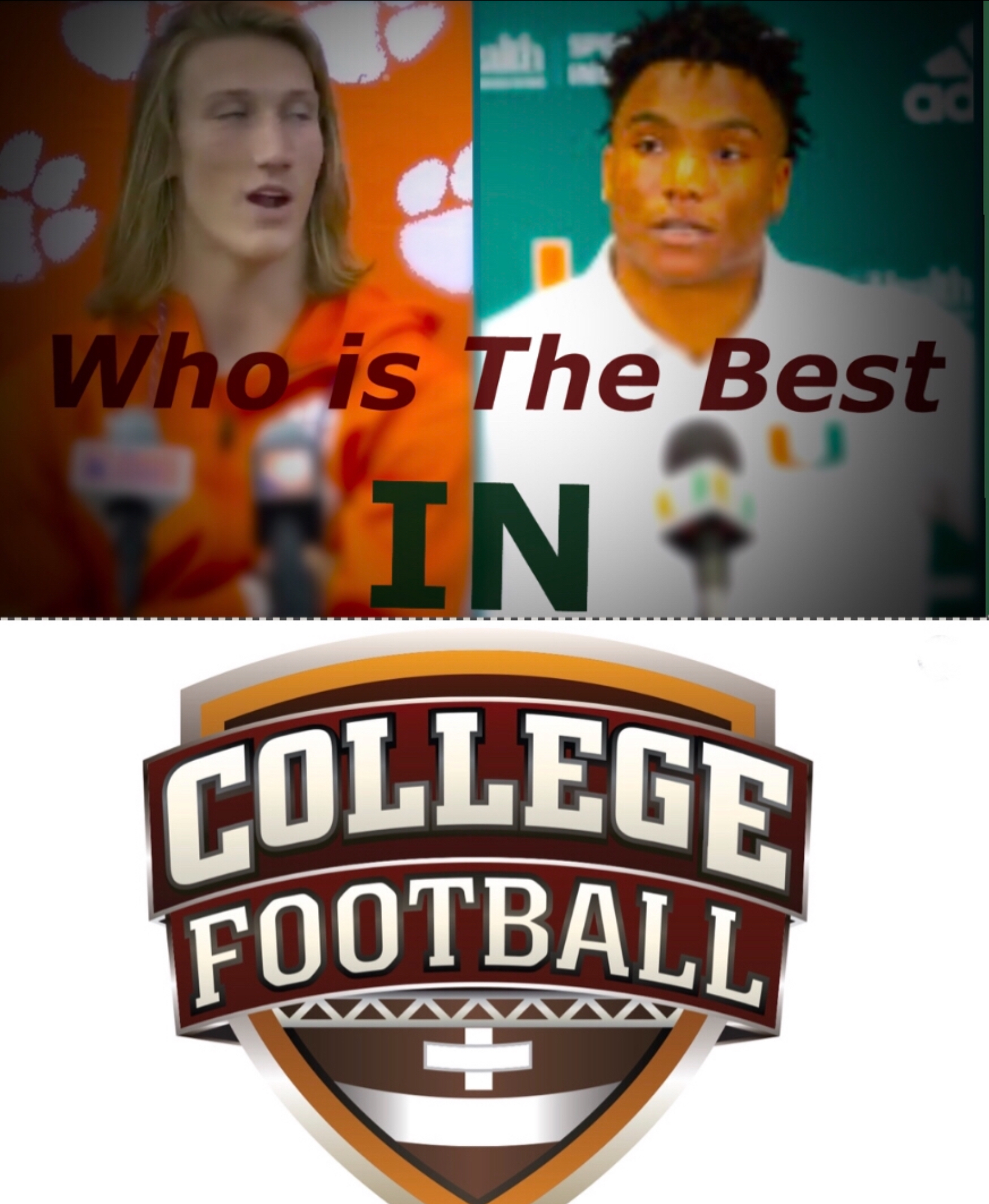 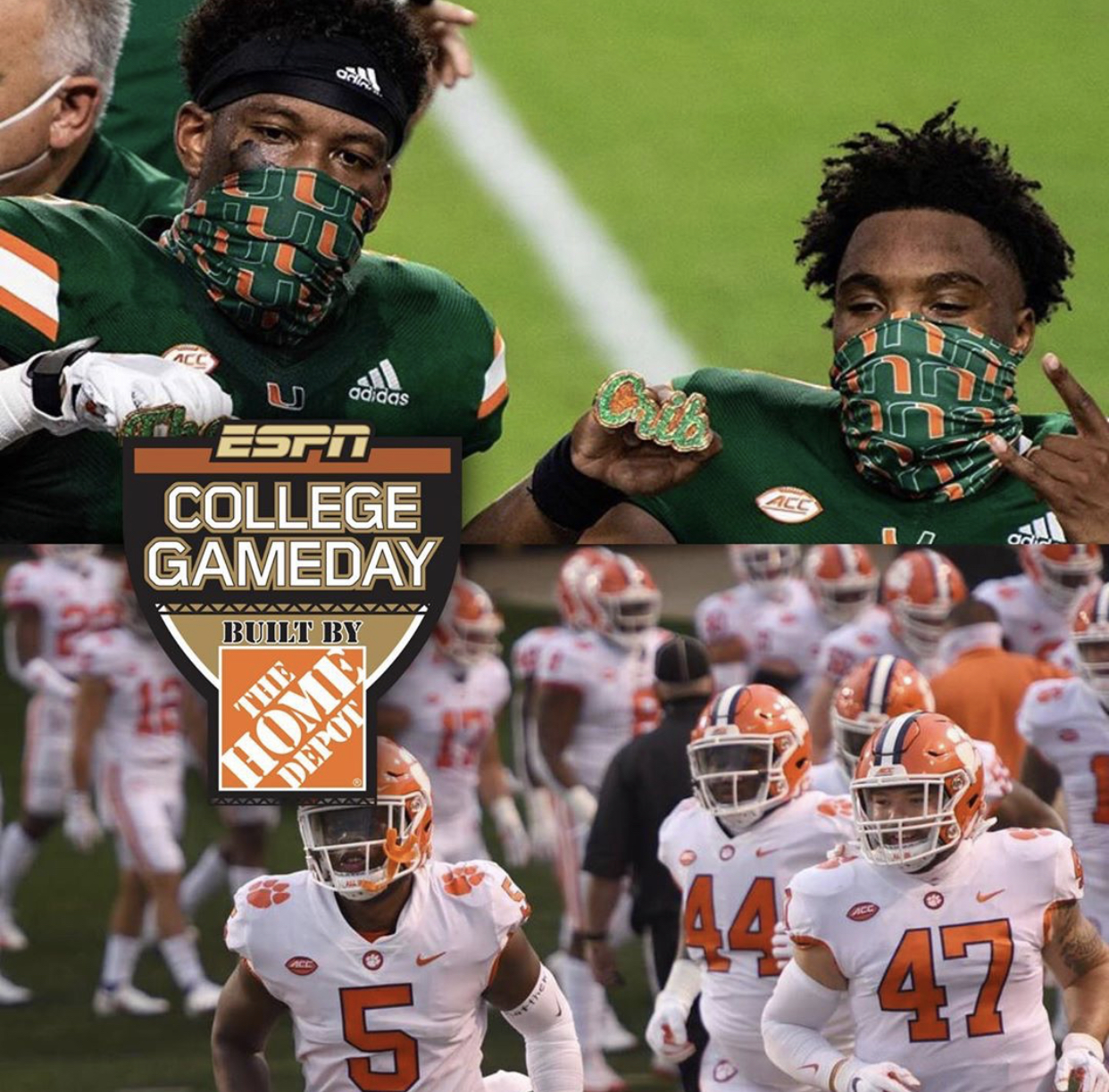 Etinenne has been there 10 years
15 if you

canesmang1 said:
Etinenne has been there 10 years
Click to expand...