Tito Benach
Mar 24, 2015
2016 Coral Gables (Fla.) running back Amir Rasul has more than enough experience in track to consider him a veteran. Rasul even posted record times as an eighth grader and won first place his freshman year at the State final track meet for the 100-meter dash with a 10.81 time.

“I won the 100-meter dash, it was exhilarating. It shows that anything can happen and I was really happy about it.”

Rasul admits that his Track and Field experience helps on the football field when it comes to breaking away from defenders.

“When I get into the open field or after I make that one cut, it’s just like home, sweet home (laughs).”

After running for 893 yards and 13 touchdowns in his first season at Coral Gables, Rasul is set to be the main focal point of the Cavaliers offense this season.

“Coach (Roger) Pollard told me that he was going to use me in running and receiving and everything for putting points on the board. Just to be that pivotal person in the offense is just amazing.”

Following his commitment to Miami, the 5’10 200 pound running back saw a flood of new offers come in from schools such as Florida, Florida State, Wisconsin and Southern California. Despite the recent surge of attention from the new schools, Rasul assures he’s firmly committed to the Hurricanes.

“I’ve been a Miami Hurricane fan since I was a little kid and just to be their guy is just something big in my life. That’s what made me commit and in addition to that the academics at UM are amazing.”

Rasul is very interested in the medical program that the University of Miami offers as well as the business program.

“They have an awesome medical program and I want to do business and pharmaceuticals and I can actually go there and do all of that as opposed to going to some other school and then having to go to another school after that.”

Rasul has noticed Miami’s early success in recruiting the 2016 class and feels the talent being assembled is enough to return Miami to its glory days.

“I mean to me, stars don’t mean anything to me, but we have three 4-star receivers and a 4-star quarterback and I’m like, Are they trying to make a legendary team or something?.”

Miami has secured some of south Florida’s top prospects in the 2016 class and Rasul compares it to the local success the 1980’s Hurricanes teams had in recruiting.

“When my uncle came from Columbus, Alonzo Highsmith, he went from there to UM and he said ‘Everybody in Miami thats good you’re not leaving, you’re staying here’ and when they did that they won the national championship. It’s like a no-brainer to me.”

Rasul currently has no visit plans as he is currently in track season.

“When my uncle came from Columbus, Alonzo Highsmith
Click to expand...

in before "Zo's would never let his nephew not come here"

Tim Irvin says "war eagle, fool"
lmaoo thats alonzo nephew ?
One minute I hear he isn't really committed then the next I see articles where is totally committed. Guess I'll just wait til Feb 2016 so I don't go crazy. These kids are something else
I think he originally committed to hold a spot and now see where he fits in the big picture.
All need now is Fils-Aime to complete the RB haul after losing out on 2 backs in gaynesville now and 1 at Notre Dame.
Amir rasul is an intelligent and well spoken player. If you have noticed he knows a lot about football period. He appreciates every offer he gets. He gives glowing reviews about every offer remember the comments from him after the uga, notre dame, fsu and UF offer he spoke highly of them. That's okay, at the end of the day he knows how often miami produces NFL backs. Can't wait to have him on campus. Him being highsmiths nephew will only help that.
[video=youtube;cTw6SHTj1Lg]https://www.youtube.com/watch?v=cTw6SHTj1Lg[/video]
That dude has effortless speed. Looks like hes jogging but leaves everyone 5-10 yards behind.

Cash said:
I think he originally committed to hold a spot and now see where he fits in the big picture.
Click to expand...

this makes no sense. with some of these highly recruited players, they should know that they are wanted basically anywhere.

Cash said:
I think he originally committed to hold a spot and now see where he fits in the big picture.
Click to expand...

this makes no sense. with some of these highly recruited players, they should know that they are wanted basically anywhere.
Click to expand...

He wasn't even rated until after he comitted to Miami
Lets see how it plays out.

He did mention Gayle Sayers and Walter Payton though. 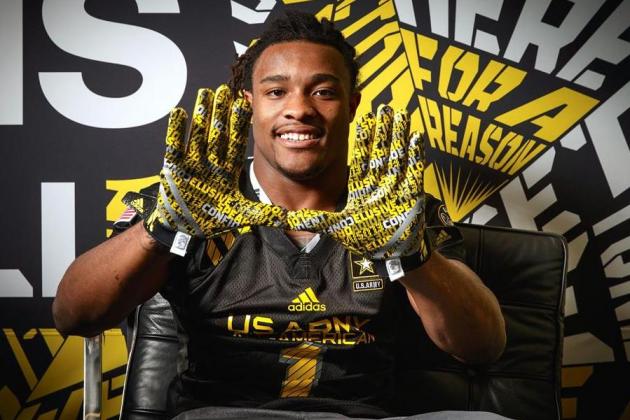 Last edited: Mar 24, 2015
Lock
I'm not surprised at all because Zo (his uncle) knows about what THAT CLASS can do because his class was the most important in UM history.